The Truth About the Egyptian Pyramids

The following statement was considered controversial or even shocking by some people, so it was my task to post it only after thorough documentation. Please relax and enjoy reading.

A. The conference and the statement

The head of Cairo’s University (Archaeology Department), Prof. Dr. Alaa Shahein has allegedly stated in a conference on ancient Egyptian science, that there might be truth in the theory that aliens helped the ancient Egyptians to build the Pyramids of Giza.

Being further questioned by Mr. Marek Novak, a delegate from Poland, as to whether the pyramid might still contain alien technology or even an UFO within its structure, Dr. Shaheen was vague and replied: “I can not confirm or deny this, but there is something inside the pyramid that is not of this world.” 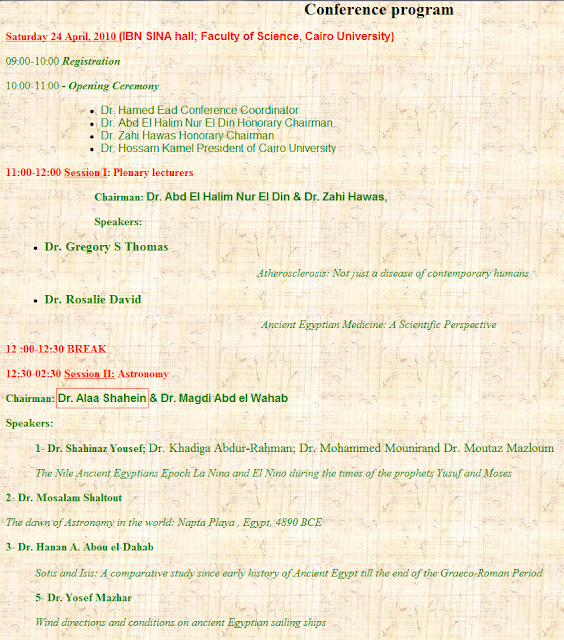 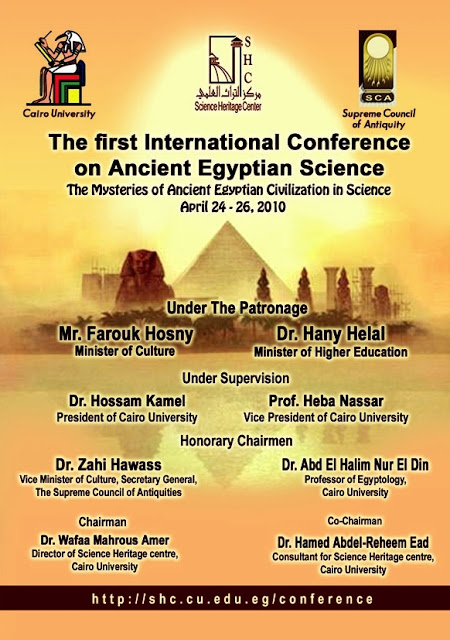 In conclusion, Prof. Dr. Alaa Shahein exists, he is the head of Cairo’s University — Archaeology Department, and he attended the conference.

B. Facts about The Great Pyramid:

1. The Great Pyramids is constructed out of 2,500,000 solid blocks, perfectly aligned!

2. The blocks weigh between 2,5 – 10 tons each. Enough stone for the construction of 25 Empire State Buildings.

3. Initially, the Great Pyramid was covered in limestone. According to Marc Antonius it was visible from 160 km and was shining like a precious jewel. 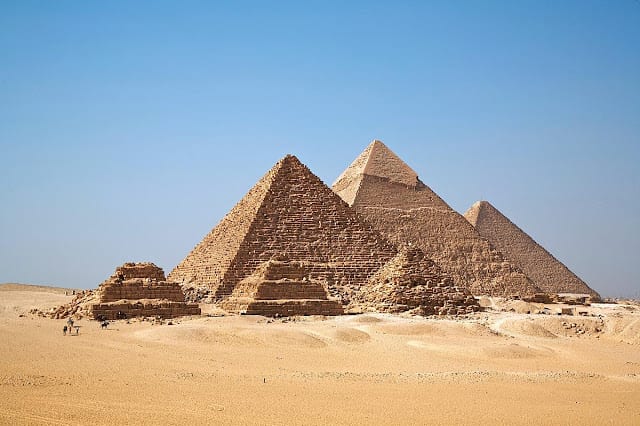 5. We are taught that the Great Pyramid was built as a tomb for the Pharaoh Khufu, but the modern discoveries show otherwise. Khufu’s name was discovered (in the so called mortuary chamber) inside the pyramid, but nobody speaks about it until 1837! One of the most important Egyptologists, Zecharia Sitchin, discovered that the writing is a fraud and was painted in May 1837.

Everything begun with a letter received from Allen Pitsburg who wrote that his grand-grand father witnessed the fraud. Because he objected to this counterfeiting, he was fired from the team and expelled from Giza (Gizeh). After examining the writing, Sitchin discovered that it is indeed a fraud, especially because the counterfeiters MISSPELLED the Pharaoh’s name. Instead of Khufu they wrote Rhufu, which for the Egyptians would have been worse than taking the Lord’s name in vain, in a Christian Church. Sitchin concluded: “THIS WOULD HAVE NEVER HAPPENED IN THE ANCIENT EGYPT”. 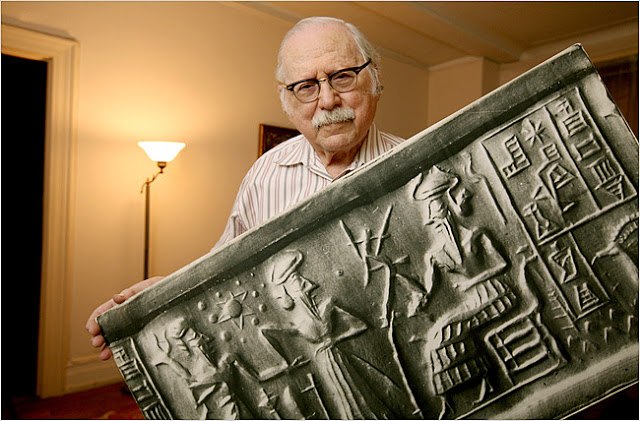 6. Khufu’s alleged sarcophagus is almost half his size and carved directly into stone. Not only that the pharaoh could not fit it, but it was also not suited for a royalty. The so called Queen’s Mortuary Chamber is sealed by huge stone blocks and doesn’t even contain a sarcophagus. The cover up is even more obvious because the official story claims that the Queen was to be cremated after her death. This never happened in the entire Egyptian history because in order for a royalty to become a God, the mummification process was mandatory!

7. NO MUMMIES were found in ANY of the Great Pyramids of Giza. What we learn today as facts can’t even stand as substantial theories!

C. Evidence: The great pyramids had NOT been built by the Egyptians:

1. Nobody knows what the word “pyramid” really means and no roots for this word were ever found anywhere on Earth.

2. None of the historians’ statements regarding the pyramids had been proven.

3. They say that the pyramids were built as tombs for the mummified pharaohs, but NOT A SINGLE mummy was ever found inside the Great Pyramids.

4. The Egyptians had no knowledge of modern geology and without this knowledge it is IMPOSSIBLE for such a construction not to crumble or sink. In the MODERN construction industry, the engineers consider acceptable a sinking rate of 15 cm in 100 years. In 5,000 years (according to the official version, though there is evidence that the great pyramids may be 10,000 years old), the Great Pyramid, weighing 6,350,000 tons (14 billion pounds) sunk ONLY 1,5 cm!

5. In MODERN constructions, it’s an extraordinary achievement to keep each side of the building at a deviation of 15 cm (6 inches). But the great Pyramid has a deviation of ONLY 0,75 cm (0,25 inches). This is IMPOSSIBLE to replicate today with our entire modern technology.

7. The mathematicians say: during the construction of the pyramids, the Egyptians should have used several very advanced concepts and formulas, which have allegedly been discovered only THOUSANDS of years later.

8. The geographical orientation of the great pyramid is probably the most amazing characteristic. Its sides are almost perfectly placed from N-S and E-W, being almost perfectly oriented on Earth’s TRUE NORTH*. How was a civilization from the quasi stone age capable of determining the true North?

*The true north is calculated on a map, by using the longitudinal lines, and it’s different than the Magnetic North indicated by compass. The true north is located in the arctic regions of Canada and continuously changes its location depending on Earth’s magnetic field.

9. The construction of the Great Pyramid shows extraordinary astronomy knowledge. The constructors could measure the day, the year and could precisely determine the Equinox. They knew that Earth is a sphere and knew how to accurately calculate its longitude and latitude.

10. The studies showed that from the pyramid’s top an energetic vortex is emanated, that extends in diameter, the higher it reaches.

12. In 1813, the astronomer Richard Procter discovered from ancient archives that the great pyramids were indeed aligned to the stars. It has been also discovered that the pyramids are highly receptive of radio energetic waves or even cosmic microwaves. Above the so called mortuary chamber inside the Great Pyramid, there are 5 huge granite tiles placed in layers, with spaces between them. The layers end with some kind of V shaped roof, pointing up. 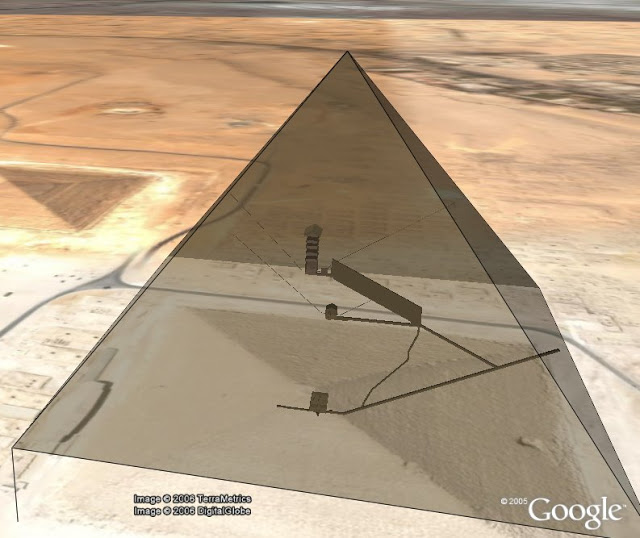 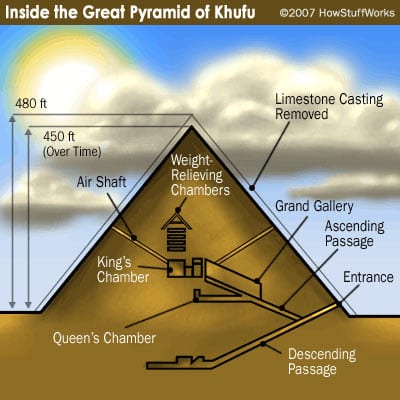 13. According to the official version of history, the construction of the Great Pyramid alone, lasted for 20 years. The slaves worked in groups of 100,000 and were replaced every 3 months.

– For the Great Pyramid to be constructed in 20 years, one stone block (weighing 2,5-10 tons each) should have been placed EVERY three and a half minutes, working non stop, 24/24 hours, 7 days a week. It’s an absurd statement because we don’t have this kind of technology today!

14. The pyramids were constructed in the forth Egyptian Dynasty, which wasn’t very aggressive in the first place and didn’t even had a very powerful army. But even if it would have been a great military power, the necessary number of slaves could not have been met on an 8,000 km (5,000 miles) radius.

15. The corrupted historians want us to believe that the slaves lifted the huge stone blocks on ramps constructed around the pyramids, and that the ramps were demolished afterwards.

– Actually, the effort to build this gigantic ramps would have been greater than the construction of the pyramids. The debris from the Great Pyramid alone would have been of nearly 300,000,000 tones. But where are the debris? This enormous quantity can’t be hidden in the desert.

16. These historians also want us to believe that the massive stone blocks were carried to the construction site on massive rolling logs.

– The only available trees in the Ancient Egypt were the Date Palms. But these were the primary food source; it is very improbable that the Egyptians would have cut their main food source for this purpose.

– The log imports are excluded! At least 25,000,000 logs would have been needed, which is way above the entire Egyptian import industry of any kind, in their entire history.

– We should also take into account that the roads were made of stone, which would have made this task IMPOSSIBLE.

– But even if the Egyptians would have tried this, the massive stone blocks would have crushed the logs. 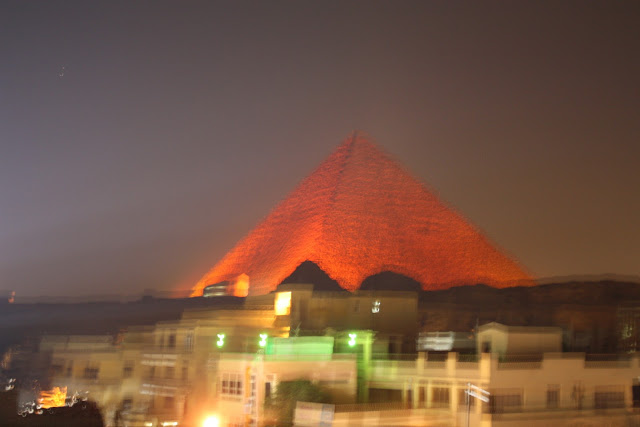 D. The Egyptians were not the architects, nor the constructors of the Pyramids!

1. It was also suggested that the stone blocks were in fact constructed from a superior type of concrete, not carved from stone.

2. The Great Pyramid is considered to be THE MOST IMPORTANT construction in Earth’s history, but there is not a single image, drawing, artifact or inventory list, no registry or depiction to tell of its construction. The Egyptians left us 3,000 years of written and photographic history, covering their entire history, but NOTHING about the pyramids of Giza. WHY?

3. But if the Egyptians are not the constructors of the pyramids, then who is? (Must-read article: The real builders o the pyramids).

In 1976, during Viking’s mission of exploring Mars, NASA received some shocking photographs. The first one shows a humanoid shaped construction which stretches for miles. NASA refused to photograph the area again, and only after much pressure agreed to take one more photograph.

In 1979, Viking sent a second photograph, showing the same structure but from a different angle. In the vicinity of the face, a pyramid (now called DNM Pyramid) appeared. As always, NASA rushed to deny, telling us that what we see it’s an optical illusion. 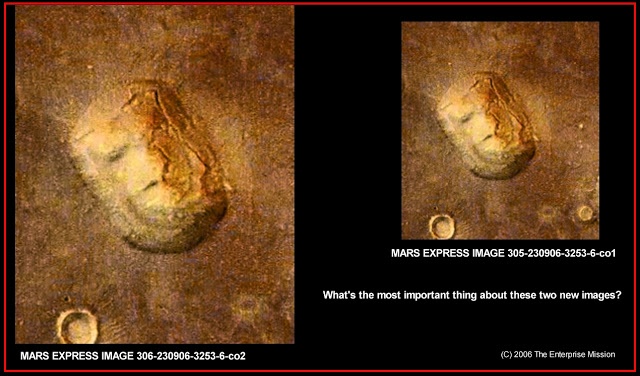 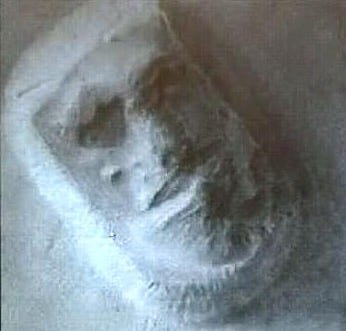 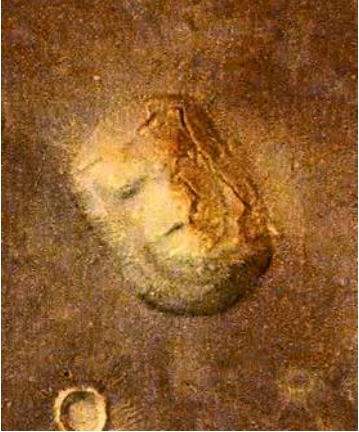 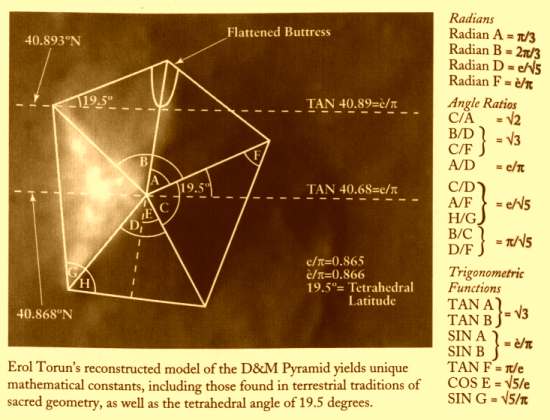 Much later, when technology advanced, a special program was used in order to three-dimensionally shape the pictures. The Martian face is 460 m high and over 1,7 km long. The study of other pictures close to that area, show multiple pyramids. This area received the name “The Cydonia Complex”.

4. More evidence of the connection between Earth and Mars is the city of Cairo, Egypt’s capital. Cairo is placed right next to the Giza Complex.

But what does CAIRO mean? You will we amazed! Cairo is a Seleucid-Arab word and it means…MARS !!!

Update: Evidence that the Anunnaki are the real builders of the pyramids.