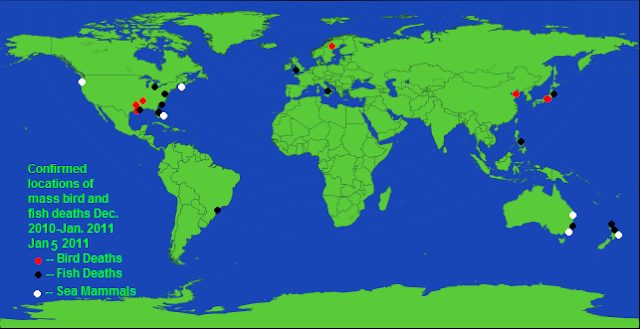 Dead Birds in Sweden, Arkansas Louisiana, Kentucky – Is this a global event?

Dead birds have now fallen from the sky in Sweden, adding to the mystery of three US states reporting dead birds falling from the sky in the last few days. This news, along with the 100,000 or more dead fish in the Arkansas River has people wondering if these fallen dead birds are connected?According to The Local, a news website form Sweden, 50 to 100 birds fell to the ground shortly before midnight on Tuesday. This is similar to the 5000 dead birds found in Arkansas, the 500 birds in Louisiana, and in 100 or so dead birds in found in Kentucky, according to CNN News and Yahoo News. All the birds met with the same demise, it appears they fell in mid-flight dead on the ground. A few of the birds were close to death, but most were already dead when investigators got there in all the cases.

The initial investigation shows the birds, in all cases, died from some horrific trauma. Theories go from the birds being frightened and running into each other as well as buildings, being struck by lightening, being hit by hail, and of course there is always the dooms day theory, that is being searched in epic proportions online today.

No one can be sure of why all these birds are tumbling out of the sky dead, the test results so far only show trauma from the autopsies done on the birds. The other test results, such as blood tests, have not been released yet.

Even though the birds are falling from the skies thousands of miles away from Connecticut, the Nutmeg State residents are just as interested as the rest of the world to find out what caused all of these dead birds. Is this a global event, now with Sweden thrown into the mix?

The bellow map was sent to me by “Acp Coward” (facebook) and shows the places on Earth where this event took place. If the map is accurate, then the event is way more extended than I ever imagined. 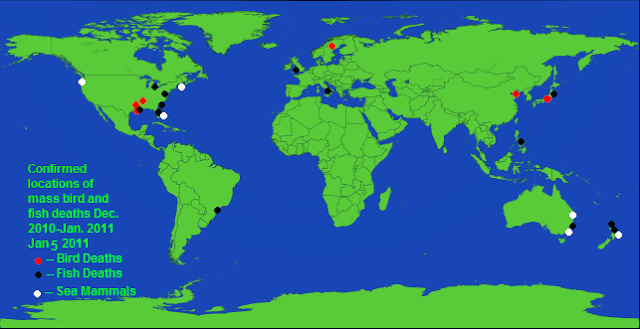 Be aware of Agape Abstraque Insitori! Previous post
The pineal gland: your connection to the Universal Matrix Next post