Fukushima Nuclear Disaster As Bad As Chernobyl According To Swedish Expert + New Radiation Map From France!

Frigyes Reisch is one of the leading experts on nuclear safety in the world. He worked for 27 years at the Swedish Nuclear Power Inspectorate, SKI. He has worked for the IAEA and with nuclear scientists on know how to judge nuclear incidents. Now he says – in an exclusive interview for Aftonbladet – the accident in Fukushima is as severe as Chernobyl. The release of radio activity is most likely in lethal doses.

The Japanese authorities classifies the disaster as a four on the seven Ines-scale, which means ”an accident without significant risk to the environment”. Reisch dismisses this as a cover-up:
– They have economic interests. This is a seven. During my years at SKI, I would not have talked, but now I’m retired and can speak freely.
– This is absolutely comparable with Chernobyl. It’s about the impact on a large area with many people and local release of radioactive material that is likely to be the case of lethal doses,” he says, Aftonbladet reports.

INES scale is set by the International Atomic Energy Agency, IAEA, and based on how a nuclear accident may cause risks to human health and the environment. The scale is logaritmic, meaning every step of the scale is about ten times worse than the previous.

The most serious nuclear accident in the world – the one in Chernobyl in 1986 – was classified to a seven.

Since the earthquake and tsunami last Friday, four nuclear power plants in northeastern Japan reported damage. Most serious damage appear to be in the Fukushima Daiichi complex where a meltdown or ”partial meltdown” has been found in Unit 1 and 3.
”The accident should be classified as the worst on the scale – Fukushima is as serious as Chernobyl”

Frigyes Reisch, 78, is associate professor of nuclear safety at the Royal Institute of Technology (KTH). Over 27 years, until 1997, he worked for the Nuclear Power Inspectorate, SKI. In 1993 he worked a year for the IAEA as an international educator in the INES scale, including in Russia and the Czech Republic. Frigyes Reisch believes that the Japanese authorities blinds the dangers of Fukushima to keep people quiet – but there is also a national scope:
– There is tremendous commercial interest in this. The entire world’s nuclear industry is Japanese.

As an example, he mention the second global nuclear power giant, General Electric Hitachi Nuclear Energy, has Japanese majority ownership.
– Given all the rescue workers who worked closely with the affected units and inhaled radioactive steam, it´s in reality impossible to not die of radiation. It’s not good. I do not know how many people who live north of Fukushima, but I guess it is so densely populated that there are a few million,” said Frigyes Reisch.

So far, winds have been westerly and blowing out the radioactivity of the Pacific Ocean. But according to forecasts, they will during the day today to turn around and start blowing north – with the chance of precipitation. How far the radioactive particles can be spread is due to local conditions. After the Chernobyl accident Gavle, 1000 km from Chernobyl, had most radioactive precipitation in Sweden.
(Original article: http://www.aftonbladet.se/nyheter/jordskalvetijapan/article8707871.ab)

According to the “Institute for Radiological Protection and Nuclear Safety” – France, the radioactive cloud will spread almost throughout the entire planet by March 26, 2011. 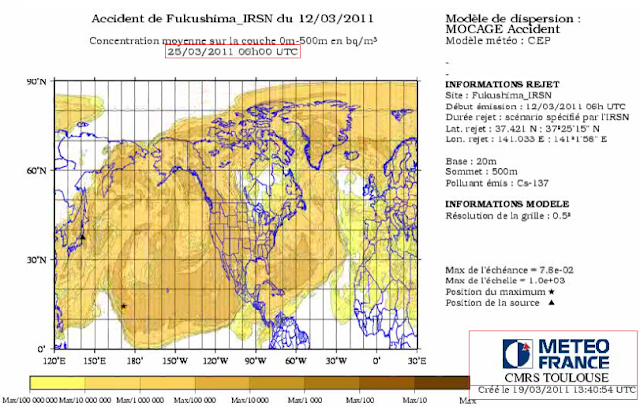