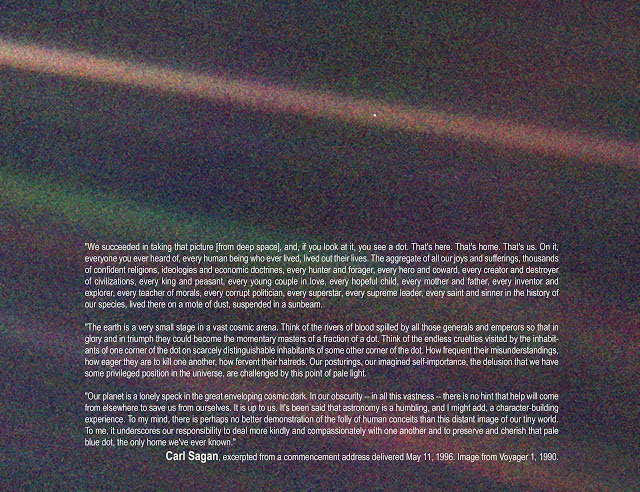 The Cosmos – A Lesson That No Human Should Skip!

But looking at us from above, we don’t look like much: just 7 billion “ants” fumbling on a “mode of dust”, suspended in the vastness of space.

My name is Alexander, and I am one of them. When I first begun this journey, I was trying to discover the Universe, but I discovered so much more! This “pale blue dot” – as Carl Sagan called it – is our planet seen from 4 billion miles away.

The entire known-history of the human species took place here, on this suspended particle in the Heavens.

Watching the night sky we see countless stars and all of them are from our Galaxy: The Milky Way. This is one of the youngest and smallest Galaxies in our Universe, having “only” about 100-400 billion stars.

A star is a massive and luminous ball of plasma, held together by gravity. The nearest star to Earth, is the Sun. Seen from other distant planets in our Galaxy, the Sun is just another star in the night sky (between 100-400 billion others).

Bellow is an infrared picture of Milky Way’s core. Please remember that all the visible stars are Suns, just like our Sun:

The plane of our Milky Way galaxy, which we see edge-on from our perspective on Earth, cuts a luminous swath across the image:
Part of the Milky Way arch emerging from the Cerro Paranal on the left, and sinking into the Antofagasta’s night lights:
Milky Way starscape taken from the Paranal Observatory:
Our entire galaxy, seen from above (we are located somewhere in the “Sun” circle):
From this perspective, our Galaxy may look like much, but remember that Milky Way is relatively small. The big Galaxies are composed of trillions of stars. Unfortunately, these numbers are so great that our minds cannot really grasp them. We simply cannot put them into perspective.
Hubble Ultra Deep Field

The Hubble Ultra Deep Field (HUDF) is an image of a very small region of space in the constellation Fornax. The image covers 11.0 square arcminutes, smaller than a 1 mm by 1 mm square of paper held 1 meter away.

The HUDF image was taken in a section of the sky with a low density of bright stars in the near-field, and revealed an estimated… 3,000+ GALAXIES!
I recommend the following video in fullscreen and HD. Please remember that every single light or spiral is a galaxy, each containing hundreds of billions to trillions of Suns:

Humbleness Lesson – Our Place in the Universe

If we go even further away and look at a wider picture, the Galaxies are grouped together in what we call “Groups of galaxies” and “Clusters of galaxies”.

Groups of galaxies are the smallest aggregates of galaxies. They typically contain no fewer than 50 galaxies.

Clusters are larger than groups, although there is no sharp dividing line between the two. When observed visually, clusters appear to be collections of galaxies held together by mutual gravitational attraction. However, their velocities are too large for them to remain gravitationally bound by their mutual attractions, implying the presence of either an additional invisible mass component, or an additional attractive force besides gravity. They contain 50 to 1,000 galaxies.

Bellow, we have a Galaxy Cluster, photographed by NASA. Please remember that each light or spiral we see it’s an entire galaxy (containing hundreds of billions to trillions of Suns):

The observable universe consists of the galaxies and other matter that we can in principle observe from Earth in the present day, because light (or other signals) from those objects has had time to reach us since the beginning of the cosmological expansion.

Bellow is a visualization of the 93 billion light year (or 28 billion parsec) three-dimensional observable universe. The scale is such that the fine grains of light represent collections of large numbers of superclusters. The Virgo Supercluster – home of Milky Way – is marked at the center, but it’s too small to be seen in the image:

The Universe versus the Observable Universe

Some parts of the universe may simply be too far away for the light emitted from there at any moment since the Big Bang to have had enough time to reach Earth at present, so these portions of the universe would currently lie outside the observable universe.

In the future the light from distant galaxies will have had more time to travel, so some regions not currently observable will become observable in the future. However, due to Hubble’s law regions sufficiently distant from us are expanding away from us much faster than the speed of light and the expansion rate appears to be accelerating.

A diagram of our location in the observable universe:

The Road Back Home

I’m such a physically small being, living on a spec of dust, and I’ve had the opportunity to travel through the vastness of our Universe and marvel of its beauty. Traveling at the speed of light, I needed 46 billion years to reach the edge of the observable universe… in one direction.

Here, at the Universe’s edge, I finally forgave myself for being so arrogant and so stupid, and only after I’ve stepped out of my selfish bubble, I was able to restored my conscious connection to the Source.

It taught me that this small physical being is in fact an infinite spiritual entity and that our Universe is actually a Multiverse (and not the only one). I’ve learned many other lessons as well, from humbleness to unconditional love. Finally, 46 billion light years away from home, I understood that my home is everywhere, as I am one with the entire Creation.

I LOVE YOU ALL!