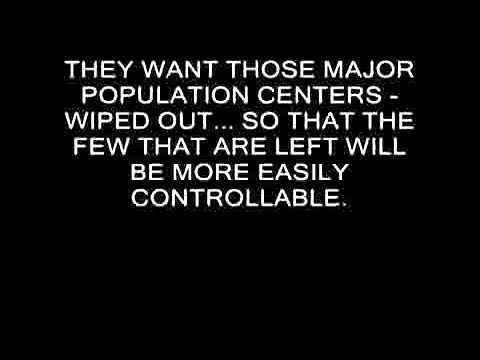 Alexander LightMay 29, 2011
During a 1997 radio show, the host Art Bell, received an amazing phone call from an anonymous male claiming to work for the government (in Area 51).

This guy said (back in 1997) about the US government plans and the disasters that are coming in 2012. He also said that there are safe spots which the government knows of, but ain’t telling to the people.
But his most interesting claims were that the aliens are actually extra-dimensional beings and they are not what they claim to be. The extraterrestrials have infiltrated most of the Military.

We don’t find out which type of aliens he is referring to, but I think he is speaking of the reptilians. From my studies they are extra-dimensional, which means that they can access a dimension that we are not able to decode. It’s a very simple thing for them to tune into a dimension that is out of our reach, therefore they can become invisible to us. Remember that an event is ‘paranormal’ only until we discover the science behind it.

While the caller was sharing this information to the public, the radio station gets cut off for the first time since Art had been doing the show and they came back on air running on a backup system.

If you havent heard this clip from the infamous radio show “Coast to Coast” you should do. Its one of those classic moments in the show which went down in its history, while Art Bell was hosting.

Cloaked in mystery and intrigue, this clip still lives on, being discovered by new seekers in both the alternative and ufo community with relish.

It is kind of scary, so maybe keep your teddybear close by.

My specific query with regards to the clip is why on earth ( no pun intended) does Art Bell say “Discharged” before the radio cuts out?

Is this man a paid actor, genuine, a manchurian candidate, an mkultra victim or what? …. you decide, if you dare…

Shortly after this broadcast Art Bell began winding down his operations at Coast 2 Coast, and wikipedia reports of strange goings on following the broadcast..

UPDATE ( 21/10/07 )
*** I’ve just received this email from an avid listener of C2C at the time of the broadcast, on their request I will keep their identity anonymous ***

I want to take this opportunity to write and clarify some apparent confusions regarding that now “classic” 1997 broadcast and it’s aftermath.

I used to be a AVID listener(EVERY NIGHT) before I subscribed to “Streamlink”,so was able to catch the initial broadcast AND ALL the subsequent follow-ups too. THIS is what REALLY happened:
1.The caller made that initial call(heard here)which was actually AUDIOTAPED and played SOME years later by Art on the air AT LEAST ONCE. It was only the BROADCAST that was mysteriously interrupted. Art spoke with the caller for MORE than is heard HERE, before he was alerted by the producer that the actual BROADCAST wasn’t being received. The COMPLETE conversation I clearly remember listening to some time later. I will discuss THAT a bit later. It was during that initial conversation that Art says the word “discharged”. Art was at that time STILL speaking to the caller and was questioning him ABOUT that discharge, evidently expressing DOUBT as to the veracity of the caller’s claims and wanting to accentuate this to his LISTENERS, hence Art’s PRONOUNCED accent on that particular word just before the broadcast cut off.

2. About a week later, the caller RETURNED, now claiming it was all a HOAX, at which point Art sounded quite RELIEVED.

3. About two years AFTER that initial call, the caller AGAIN returned, now claiming(in great detail)that he had been kidnapped, brainwashed and essentially been made to claim it was all a hoax,by secret agencies inside the govt.
As you would imagine, this totally FREAKED Art(and most of the callers that night).

4.At some point afterward(memory fails me on exactly WHEN)someone CLAIMING to be that caller AGAIN came on the phone with Art, and began a hysterical rant. Art(and most of his listeners)recognised that this caller DIDN’T sound like the same person, and Art-after exchanging a few words with him-promptly HUNG UP.

It was revealed in the audiotape of that complete first call that the responsibility of the “Aliens” entry into our world/dimension rested squarely within the US govt. itself. The caller claimed that secret factions within our military were conducting tests(based on work that had begun with German scientists during WWII)and it was during these “tests” that a portal was opened, allowing their entry. The caller insinuated that communications were made with the “Aliens” for some time PRIOR to their actual ENTRY into OUR dimension, at that PRIOR to their entry,the US govt. was led to believe that the They were NOT a possible threat to national security.

Since these (rightly)classic shows, several factors have come to my attention to make ME believe the caller was GENUINE, not a sham. At least one qualified expert on voice-stress analysis did a reading on that initial call, and declared publicly that he found NOTHING that led him to believe that the caller was making up ANY part of it.
Another factor was the caller’s description of those “extra dimensions” in terms that neatly fall into place with what are now called “parallel universes” or the “String Theory”, which of course at the time of that broadcast(1997)the general public knew almost NOTHING about. Still ANOTHER reason I believe it’s NOT a hoax is the fact that Art Bell has publicly declared he DIDN’T play any part whatsover in it, other than what was heard on-air those nights over that two year period. Art certainly has his faults(I’m NO fan of his “child bride” marriage…especially SO SOON after Ramona’s demise)but I sincerely believe in his PROFESSIONAL integrity, and I think most of his listening audience DO TOO!

PS In regard to later allegations that it was TOM GREEN who was the mystery caller, I would bet the farm that if he made ANY of the calls it was only the FOURTH:where Art and most callers DIDN’T BUY IT, and Art promptly HUNG UP on the guy!”

Special thanks to Heather Dodds for the update.