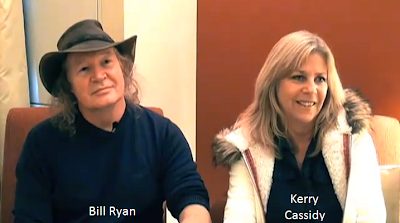 The founder of ‘Project Camelot’ and ‘Project Avalon’, Bill Ryan, received back in 2010 a letter containing ‘The Human and Reptilian Evolutionary Tree’. The letter was sent by someone known as ‘Charles’.

The material had been finally released to the public by co-founder Kerry Cassidy. You will understand why she released it after reading her message: 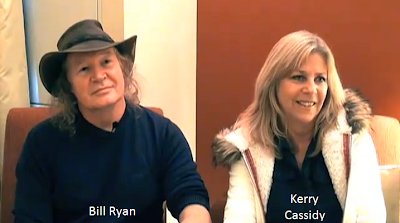 I am putting this in writing so there is no confusion. Based on my dream (and now after hearing subsequent events at your end) I believe you are being targeted because you possess this information. Therefore I am going to release it from my end so that this goes viral and you cannot be targeted any longer. I do this without your consent and take full responsibility. Whereas in my view this information contains gross inaccuracies, I believe that it is being used by Charles (and group) as a sort of ‘power over you’ by them so that they can use that as leverage to make you think you have something they ‘don’t want out there’ and therefore you are perceived as a sort of threat….

The only way to deal with such coercion is to make the whole thing public. There is no reason not to..

Having me release it will remove the pressure from you and also since I will strongly emphasize this is distorted and ego centric on their part it will hopefully force the situation into a whirlpool of disinfo and eliminate this nonsensical targeting and implied threat.

Let the chips fall where they may.

Again, because it is not information with the ring of truth it will go the way of all such information eventually. It is only because you give it power that it has any over you at all.

In the spirit of Camelot, and the best place to hide is out in the open I release this info.

Here is the letter and the evolutionary tree: 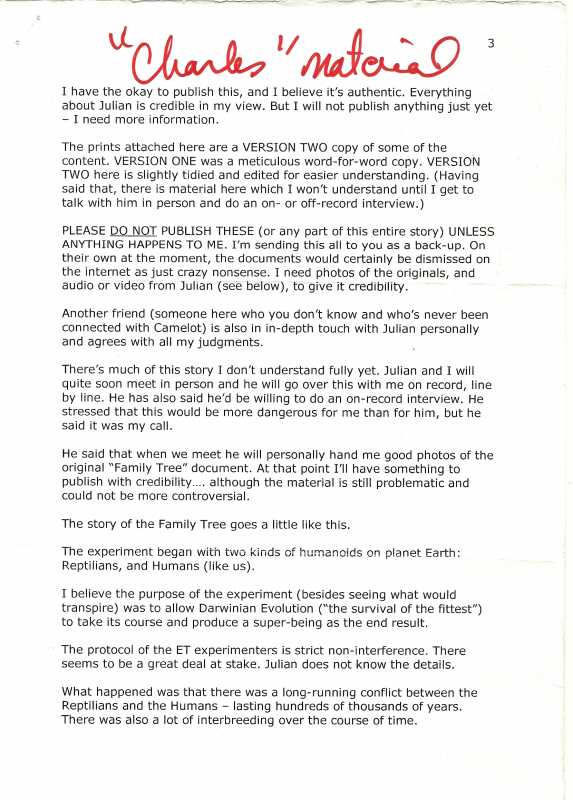 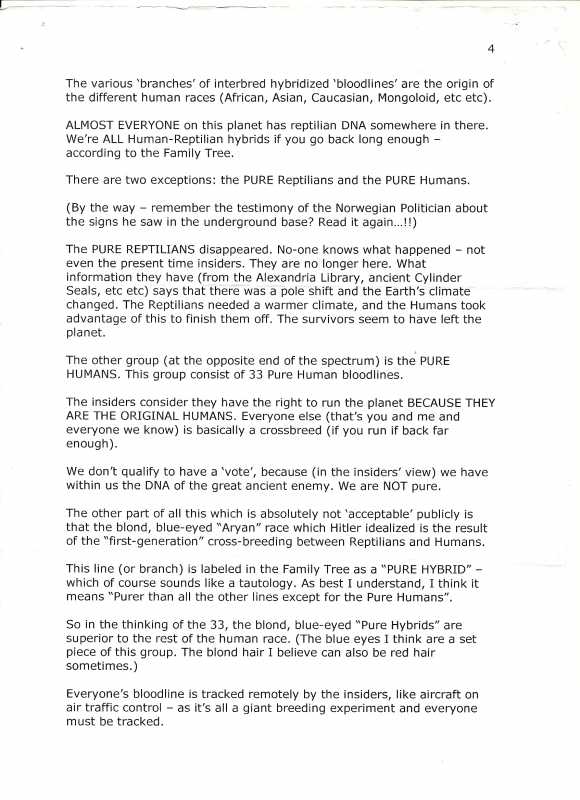 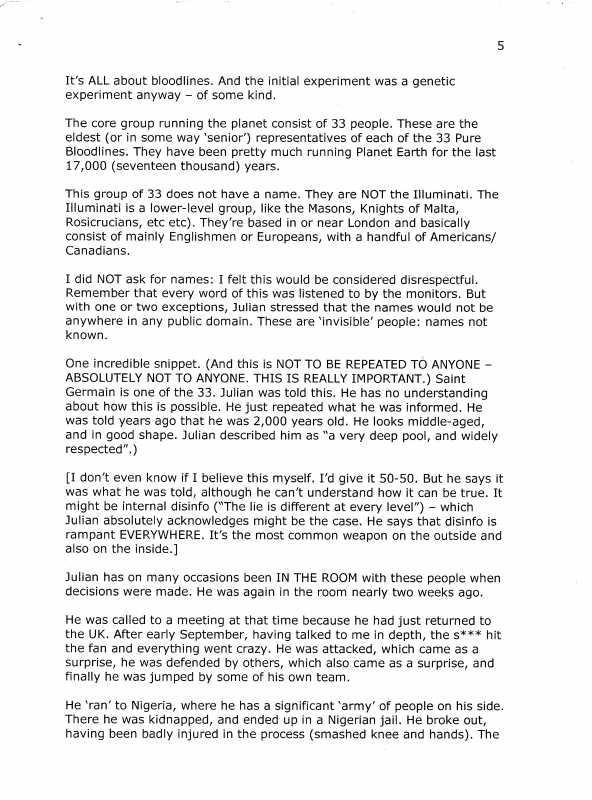 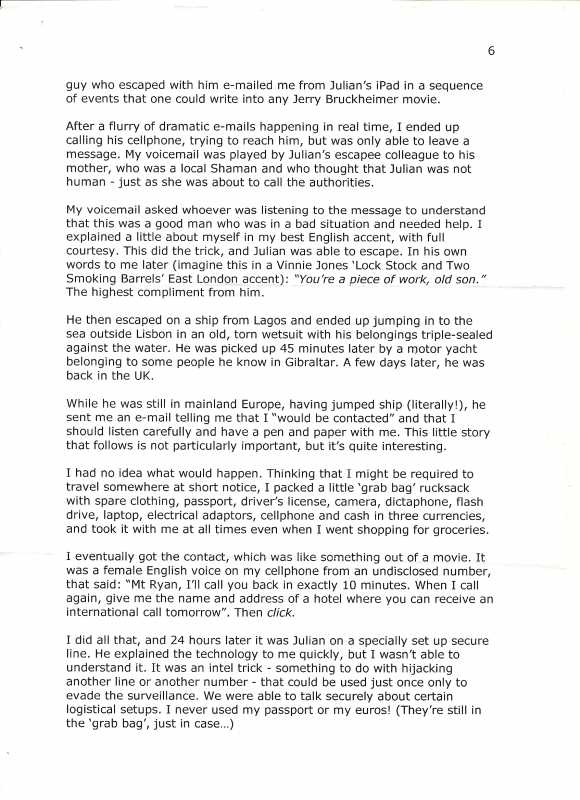 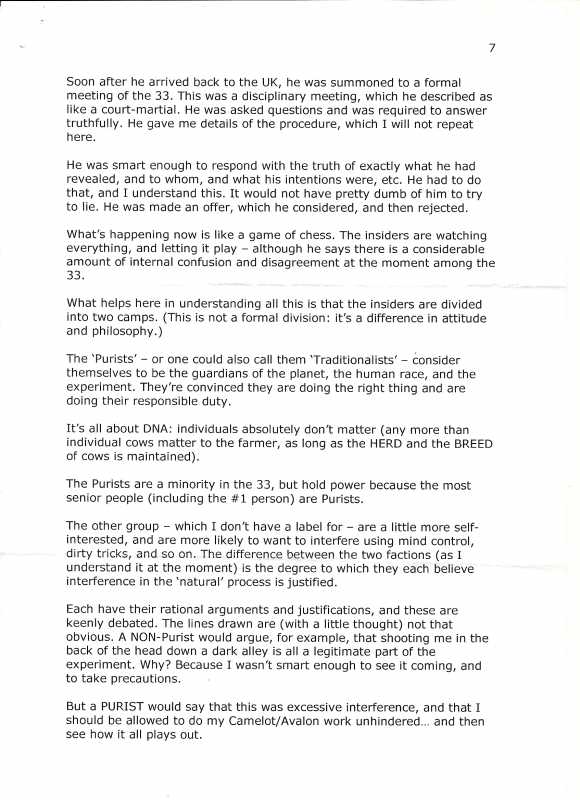 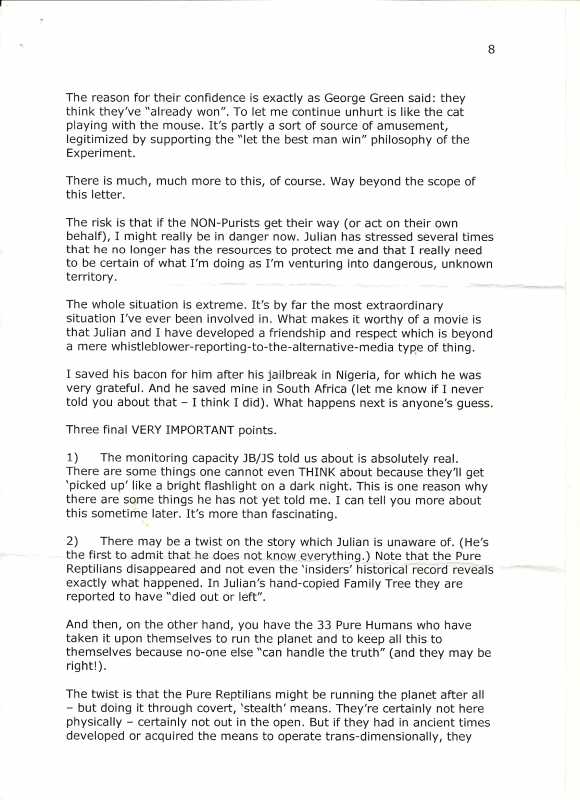 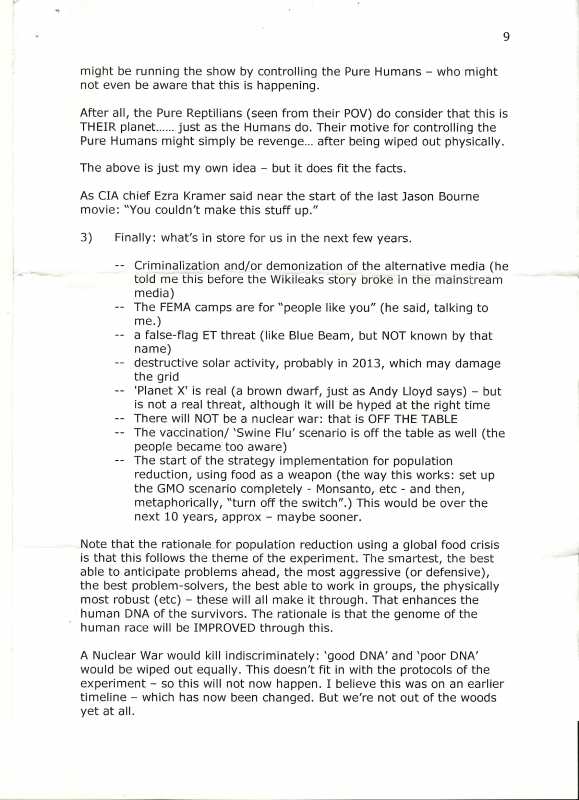 The Human and Reptilian Evolutionary Tree: 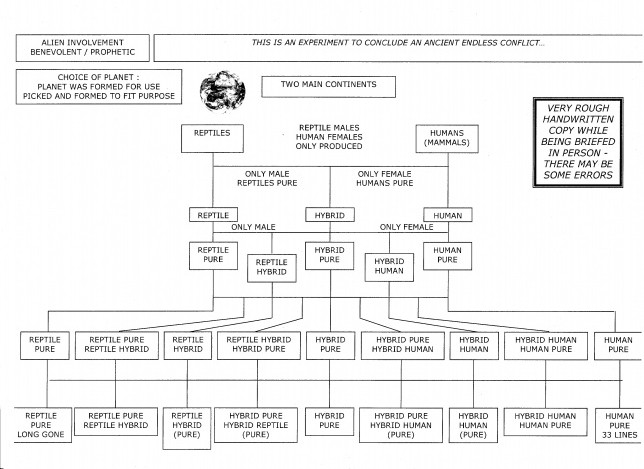 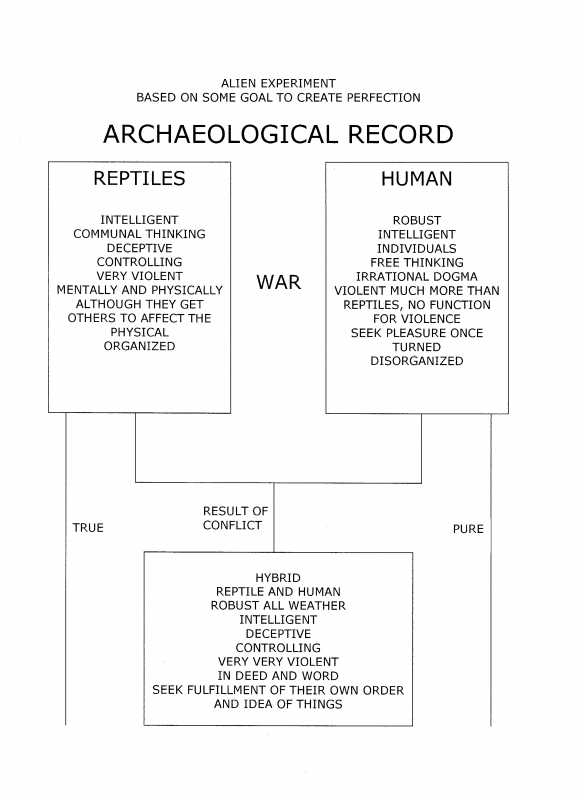 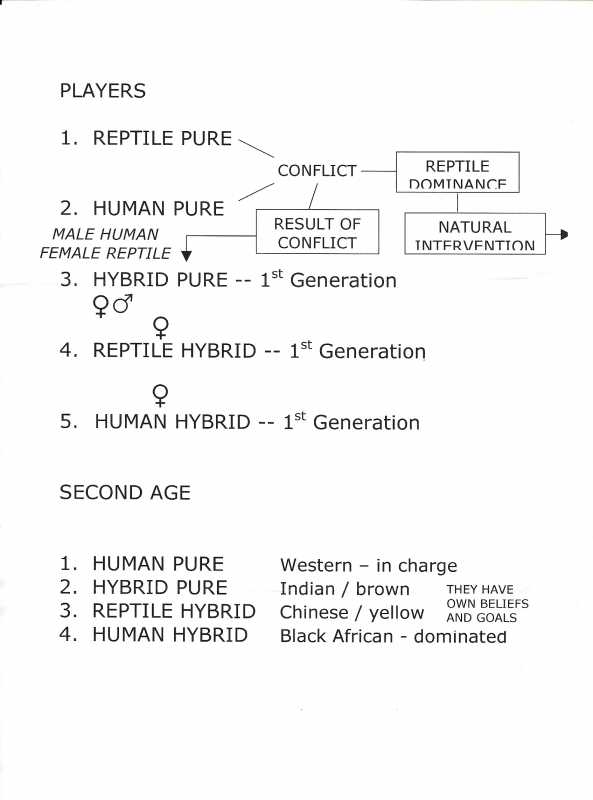 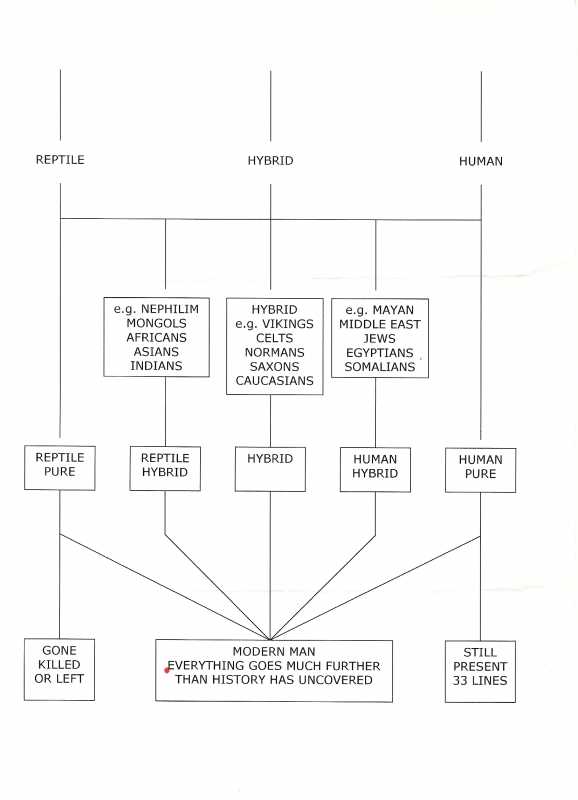 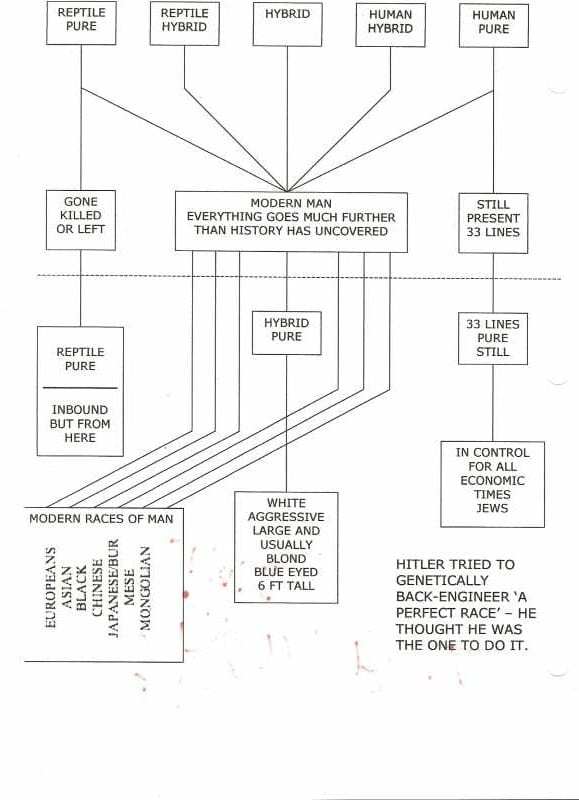 Beloved friends,
This letter is very interesting and helpful, but my research proves this is not our true history. This is a truncated version, just how the reptilians want us to know it. They haven’t upgraded us to a better specie, but instead downgraded us to a lesser one. Humans had at least 12 DNA strands active and we were very strongly connected to the Creation. Humans were kind and positive and never knew negativity until the reptilians came to Earth and genetically modified us to fit their malevolent purposes.

The reptilians genetically modified us to become puppets for their goals. With only 2 DNA strands we are very easy to control. Further, they gave us a part of their brain, by mixing their DNA with ours. This part of the brain is known in the modern medicine as the ‘reptilian brain’ and it is responsible with all the negativity: hate, fear, revenge, worship, rituals, etc. They made us very weak, while our negative emotions were/are very strong, therefore we could not be in control of our own actions. But times have changed! Now we are more powerful and we are being helped to evolve once again!

(Our bodies are developing 12 DNA strands once again!
Click HERE to read the article: “Amazing! Scientists: Our DNA is Mutating As We Speak! We Are Developing 12 Strands!”

The reptilians are deceivers and this is what they want us to believe, that they are our creators and we owe them. Now this story comes out to add more disinformation and to make us turn attention from them. The reptilians could not ‘die out’ or leave this planet. They are too strong and too intelligent. They are in control.

One of the Illuminati plans is to admit that extraterrestrials are real, but to present the reptilians and grays as heroes. The enslavers will become heroes and we will worship them.

For me, this story is pure disinformation. In my perception the reptilians are still here, because Earth is the last planet that fits their low vibration. The final battle will be held here and we will win it….not by weapons and wars, but through love and unity.

The evolutionary tree is mostly accurate in my opinion, but it needs another representation. The ‘pure humans’ are in fact ‘humans with pure reptilian DNA’ and they are the main puppets and hosts of the reptilians.

As you see, the truth is finally coming out. This process cannot be stopped. The following years will reveal us our true history, step by step.