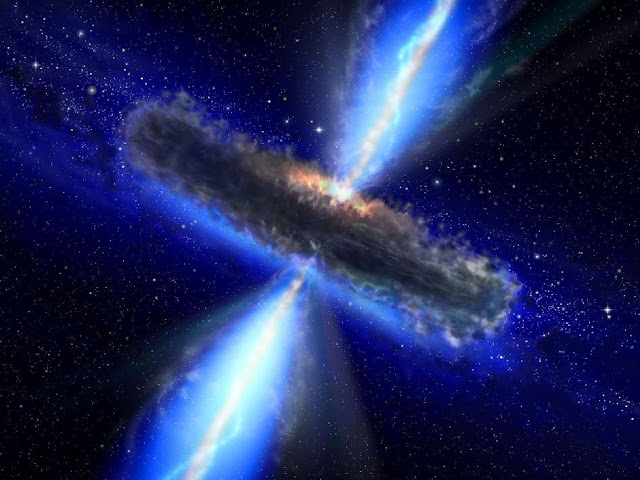 According to khaleejtimes.com,
A quasar is a powerful, old celestial object which feeds on a black hole, an object in space so dense that its escape velocity exceeds the speed of light.

“We not only detected water in the farthest reaches of the universe, but enough to fill Earth’s oceans more than 100 trillion times,” said University of Colorado-Boulder associate professor Jason Glenn, study co-author.

The quasar’s power comes from matter spiralling into the central supermassive black hole, estimated at some 20 billion times the mass of our sun, said study leader Matt Bradford of the California Institute of Technology (Caltech) and NASA’s Jet Propulsion Lab.

The water measurement, together with measurements of other molecules in the vapour source, suggests there is enough gas present for the black hole to grow to about six times its already massive size, said Bradford.

Two teams of astronomers have discovered the largest and farthest reservoir of water ever detected in the universe. The water, equivalent to 140 trillion times all the water in the world’s ocean, surrounds a huge, feeding black hole, called a quasar, more than 12 billion light-years away.

“The environment around this quasar is very unique in that it’s producing this huge mass of water,” said Matt Bradford, a scientist at NASA’s Jet Propulsion Laboratory in Pasadena, Calif. “It’s another demonstration that water is pervasive throughout the universe, even at the very earliest times.” Bradford leads one of the teams that made the discovery. His team’s research is partially funded by NASA and appears in the Astrophysical Journal Letters.

A quasar is powered by an enormous black hole that steadily consumes a surrounding disk of gas and dust. As it eats, the quasar spews out huge amounts of energy. Both groups of astronomers studied a particular quasar called APM 08279+5255, which harbors a black hole 20 billion times more massive than the sun and produces as much energy as a thousand trillion suns.

Astronomers expected water vapor to be present even in the early, distant universe, but had not detected it this far away before. There’s water vapor in the Milky Way, although the total amount is 4,000 times less than in the quasar, because most of the Milky Way’s water is frozen in ice.

Water vapor is an important trace gas that reveals the nature of the quasar. In this particular quasar, the water vapor is distributed around the black hole in a gaseous region spanning hundreds of light-years in size (a light-year is about six trillion miles). Its presence indicates that the quasar is bathing the gas in X-rays and infrared radiation, and that the gas is unusually warm and dense by astronomical standards. Although the gas is at a chilly minus 63 degrees Fahrenheit (minus 53 degrees Celsius) and is 300 trillion times less dense than Earth’s atmosphere, it’s still five times hotter and 10 to 100 times denser than what’s typical in galaxies like the Milky Way.

Measurements of the water vapor and of other molecules, such as carbon monoxide, suggest there is enough gas to feed the black hole until it grows to about six times its size. Whether this will happen is not clear, the astronomers say, since some of the gas may end up condensing into stars or might be ejected from the quasar.

Bradford’s team made their observations starting in 2008, using an instrument called “Z-Spec” at the California Institute of Technology’s Submillimeter Observatory, a 33-foot (10-meter) telescope near the summit of Mauna Kea in Hawaii. Follow-up observations were made with the Combined Array for Research in Millimeter-Wave Astronomy (CARMA), an array of radio dishes in the Inyo Mountains of Southern California.

The second group, led by Dariusz Lis, senior research associate in physics at Caltech and deputy director of the Caltech Submillimeter Observatory, used the Plateau de Bure Interferometer in the French Alps to find water. In 2010, Lis’s team serendipitously detected water in APM 8279+5255, observing one spectral signature. Bradford’s team was able to get more information about the water, including its enormous mass, because they detected several spectral signatures of the water.

Other authors on the Bradford paper, “The water vapor spectrum of APM 08279+5255,” include Hien Nguyen, Jamie Bock, Jonas Zmuidzinas and Bret Naylor of JPL; Alberto Bolatto of the University of Maryland, College Park; Phillip Maloney, Jason Glenn and Julia Kamenetzky of the University of Colorado, Boulder; James Aguirre, Roxana Lupu and Kimberly Scott of the University of Pennsylvania, Philadelphia; Hideo Matsuhara of the Institute of Space and Astronautical Science in Japan; and Eric Murphy of the Carnegie Institute of Science, Pasadena.

Funding for Z-Spec was provided by the National Science Foundation, NASA, the Research Corporation and the partner institutions.

Caltech manages JPL for NASA. More information about JPL is online at http://www.jpl.nasa.gov .