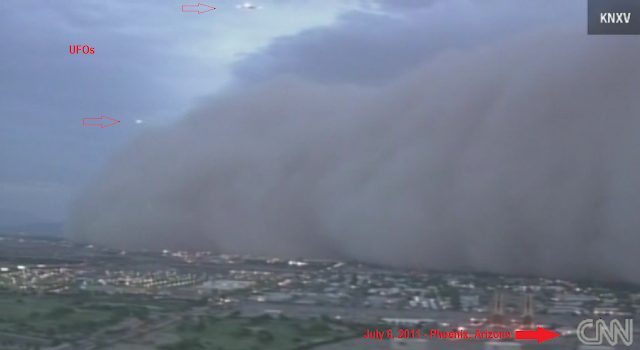 The violent dust or sandstorm, called a haboob, typically occurs over desert land and can stretch thousands of feet high, according to the National Weather Service.

Tuesday evening’s version, which had sustained winds of up to 69 mph and stretched more than 100 miles at one time, was especially intense. CNN affiliate KNXV-TV broadcast striking images of the storm’s advance into the Phoenix area.

Here is the footage of the storm recorded from a helicopter (please watch in full screen, 1080 HD), clearly showing 2 bright UFOs (one of them flying just in front of the storm, while a second one appears from inside it):

And here is the original video on the CNN website:
Reference: http://edition.cnn.com/2011/US/07/06/arizona.dust.storm/
Why the lights are NOT airplanes

P.S. I saw a video from CNN trying to ridicule the idea of those 2 lights being flying saucers. For CNN to rumble about this for minutes, trying to bring evidence that those are nothing more than planes, offered me the final piece of the puzzle. “He who excuses himself, actually accuses himself”.