USA To Intentionaly Default, Martial Law/Dissolution of the House and Senate Imminent!

The following email was sent to me yesterday and you should really read it and take note!

The debt limit negotiations are not what they appear to be. The negotiations are being used as a diversion to cover up a devious plan to push the USA into a default.  Americans are being ‘played like a fiddle,’  all the theater is a smokescreen for what is taking place behind the scenes.  A select number of US Senators are in collusion with Barack Obama to bring about an intentional economic default, declare Martial Law,  and then bring about a  dissolution of the Senate and the House of Representatives. This plan has been engineered and ordered by the New World Order Financial Elite who put Obama into power. 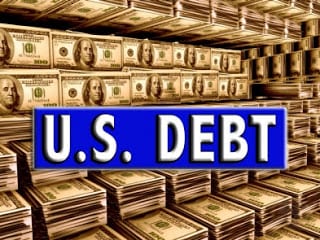 Prophet Linda Newkirk has an impressive track record for exposing the plans of the New World Order.

Immediately after the events of 911 Linda exposed the New World Order crowd as the real culprits who were behind the attacks on the Twin Towers.

(Review the chronological posts on her website for Sept, 2001) Their ruthless attack upon America, was of course, part and parcel of their plan to create a phony war on terror,  take away American freedoms, destroy the US economy, and to break the back of the US military.

In Nov/08 just days after the election while America was ‘head over heels’ in love with Obama, Linda revealed in a ‘stunning prophecy’ that Obama was put into power by the New World Order Illuminati under the direction of Evelyn David de Rothschild. The purpose of his presidency, being of course, to bring about the destruction of America and to turn it into a fascist police state easily controlled by the Globalists. It can now be seen, that this has indeed turned out to be the truth.

Linda has exposed many NWO ‘false flag’ terrorism plans in recent years before they could carry them out. It is a matter of public record at prophecies org. Please send this warning to everyone you know. The mainstream media are controlled by the NWO, do not waste time to write them. Email your State Representatives NOW!  Do not allow them to get away with their evil plans for Martial Law in America. All dissidents will be purged and disappeared along with all alternative news websites. Do your part now!

From The Mountain Prophecies
Book Twelve Chapter Seventy Nine“An Urgent Message”
The Sons of God are Coming; and
A great coup is on-going in the U.S.A. Government
Come to Me, My Blessed Child and listen; for I have a message, both for you and for My people. And, this message concerns the escalation of the New World Order in this nation of America, and indeed all over the world. For, I tell you now, that fear is at the heart of all that they do.  And, this fear is of Me and regarding what I will do.

My Blessed Child, I often shield your eyes and ears from the constant flood of beings, both human and non-human, who come through the walls of your house, both to gawk at you and to torture and punish you. Yes, My Blessed Child, you have no clue, but their great unrest is about My work, which is on-going in you. Their great unrest is about the great power, My power, which I have placed in My Holy Son, who is in you.  In wonder, they gape and they gawk at you; and also in great disbelief they gawk at my fire in Him. For, this fire quickly dissolves great amounts of the hardest substances, which are known to them. And, these are the very hard substances, which they forge into your bodies, their terrible weapons against you.

Yes, they are in great amazement, yet fear is at the root of their eyeing of you; for they also see their own coming demises. And, yes they come from many nations, from the military, medical and scientific areas, human and non-human alike; and in and through their great assaults and attacks against you and My Holy Son, they have spared you nothing.

And, the whole world will also know that I have done a new thing in the whole earth. For, My Sons will be born into the earth and they will come forth, even amidst great suffering and hardships, even as you have suffered and have come forth.

Yes, My Little One, this time is very close. Yet, as I stand so near to your door, I pause, just for a short while. Yes, I pause.  And, then after this short while, My Little One, I will knock at your door and it will be a new day in the earth, both a very good day and a very bad day, at the same time.

So, tell My people, that it is but a little while, a little wait; and I shall knock and I shall raise up My Sons in the earth. For, I shall soon release the holy babes of light and fire, who rest in Me.  And, they, too, are in very great anticipation of what will soon unfold.  Understand?

So, My Little One, they come now from many nations to behold the fire of My Son, who is in you and as the case has been for so many years, the roaring of their ships is always heard around you.  For, many of them still think to escape; but they will not escape and enough of them now see that they will not escape. So, they now prepare to fight. They prepare for a worldwide police state and worldwide concentration camps.

So, My Little One, this is what you see now at the upper levels of the government of the U.S.A.  You see very great treason.

I have shown you the plans of President Obama, which are the plans of the Queen of England and the Rothschild man.  They now want and demand total control of the U.S.A., and at the same time a total financial stripping of the U.S.A., which will most certainly cause chaos all over the nation.  And, of course, their remedy is martial law and concentration camps.  This is their plan.

Now, as I have shown you: what Obama plans is to totally dismantle the House of Representatives, and to do away with the House of Representatives totally, at the national level. And, he plans to get rid of the Senate, all but a few, who will remain, according to his plans. And, those in the Senate, who are strict and devoted to his coup to derail the U.S.A. financially at this time, will remain.

A plot is on-going and it involves a few in the Senate, who have aligned themselves with President Obama, for the swift and total destruction of the U.S.A. financial system and the destruction of the U.S.A. Government, as you know it. Your president has promised great power to these, who are loyal to him in the Senate, when the system is brought down.

Father, how many are these in the Senate, who do this plotting with Obama?

My Little One, reach down into the darkness and bring out the numbers. What do you have in your hands?

My Lord, I have the numbers: a two and a seven, or a 27. So, Father, twenty-seven senators are playing a great part in Obama’s current coup plot.

Yes, My Little One, he plans to keep twenty-seven (27) senate members, who are put in place by the Queen of England and the Rothschild man and he plans to do away with the House of Representatives and the rest of the Senate.

And, Father, what does Obama plan to do with these 27 senators?

He plans to put them over all intelligence agencies in the military and in his special police forces.

So, Obama will then answer to no one.

These are his plans.

Father, how will this go?

My Little One, it will go  badly, very badly. This is how it will go.

My Father, what do you wish for me to do?

Type this and release it, that My people may be the wiser…

I am your Father Yahweh, yea Jehovah, Most High God.

As witnessed, dictated and recorded this 30th day of July, 2011,

A VISION OF JULY 28th, 2011
President Obama’s Plan to Destroy the House and Senate!
Night before last, I had a vision in which I saw President Obama in the Oval Office.  With him, in the vision, were the Queen of England and the Rothschild man.  The Queen was demanding of President Obama, that this nation be stripped down financially; and when I looked at the Rothschild man, he had something in his mouth, like egg beaters and these beaters were stirring up blood, and blood was coming from his mouth. Then, I understood that he is ordering the blood of the American people. It is carnage that he wants,  and through the stirring up of strife, he will have his blood.

Then, I saw that a strange object was given to Obama, which was like a baton, but when it opened up, there inside were many slim swords; and our Saviour said, “Obama will shred the fabric of this nation.”

Then, there came a vision of the House of Representatives and I looked within the House and all seats were empty, not a single person inside.  And, then I looked again, and there was President Obama and beside him certain people, whom I knew to be senators, but I could not count them. SO, I did not know how many there were.

Now, today, my Dear Ones, our Saviour gives us the rest of the picture.  May our Precious Saviour have mercy on our souls; for the capitol of this nation has become a very great hog wallow, full of every kind of filth and full of every perverse thing. And, according to the righteousness of the Most High God, He will surely judge these whores, perverts, liars, thieves, murderers and traitors.  For, every one of them is bought and sold and has no allegiance to the people of this nation.  Now, the sword hangs over this nation.

Repent, oh you people of America; for this corrupt nation is under judgment of the Most High God Yahweh; and He will not long allow such evil to stand in His face.