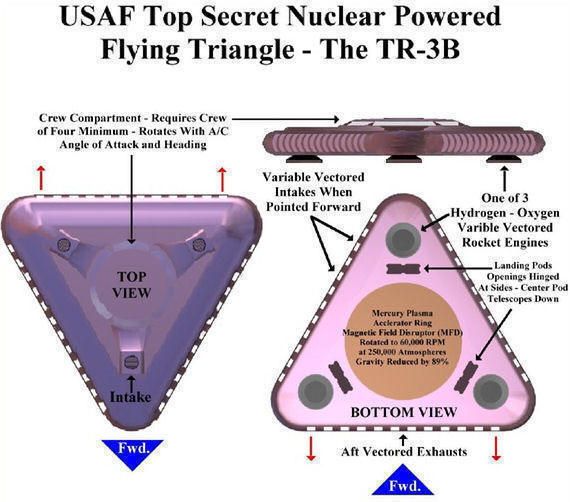 There are (12) special-technology advanced aerospace platforms all using antigravity technology in some form. These 12 are:

The most primitive antigravity technology is electrogravitic. This involves using voltages in the millions of volts to disrupt the ambient gravitational field. This results in an 89% reduction in gravity’s hold on airframes in such vehicles as the B-2 Stealth Bomber and the TR3-B Astra triangular craft. And given the considerable ambient ionization field I observed around the X-22A, it is reasonable to assume that extreme-voltage electrogravitics is also employed with these craft.

The next level up of sophistication is magnetogravitic. This involves generating high-energy toroidal fields spun at incredible rpm’s, which also disrupts the ambient gravitational field, indeed to the extent that a counterforce to Earth’s gravitational pull is generated. The early British aeronautical engineers called this dynamic counterbary. This may have been used in some earlier American saucers and prototypes, but I have only been told that the secret Nautilus spacefaring craft uses magnetic pulsing, which appears to utilize this technology.

The third level of sophistication, that used in the more modern American antigravity craft, is direct generation and harnessing of the gravitational strong force. Such a strong-force field extends slightly beyond the atomic nucleus of Element 115, an exotic element donated by Star Visitor scientist-consultants to human scientists at S-4, a secret base south of Area 51. By amplifying that exposed gravitational strong force, and using antimatter reactor high energy, and then directing it, it is possible to lift a craft from the Earth and then change directions by vectoring the shaped antigravity force field thus generated.

Gary McKinnon – What did he really find? 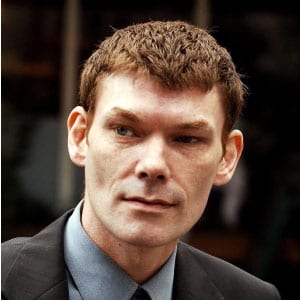 McKinnon “stumbled” into Johnson’s systems and said he found a high definition picture of a large cigar shaped object over the northern hemisphere. He said that he was so shocked by the picture that he didn’t think to immediately save it. He also said that the file size was so large that is was difficult to view it on his computer. Eventually his connection was lost, and so was the picture.

The most shocking find to McKinnon, the one he thought would be his ace in the hole negotiating with the US government, what he “stumbled” on and found in the systems of US Space Command. McKinnon says he found a log that listed non-terrestrial officers. He doesn’t believe that these were aliens, but he believes this to be evidence that the US military has a secret battalion in space. Some of these logs were ship to ship transfers. 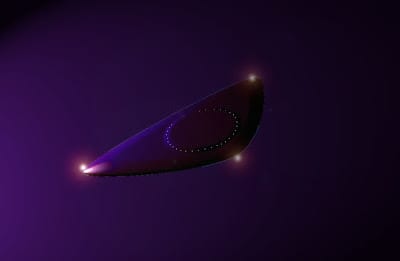 Information has come into the public’s attention which suggests that Lockheed has been working in the “black” on a discoid-shaped aircraft. Not only does this aircraft utilise anti-gravitic propulsion, but the discs are believed to be equipped with highly advanced particle beam weaponry.

Lockheed does hold the patents on disc-shaped passenger aicraft, so it is not unreasonable to assume they have also (successfully) investigated the possibility of creating such craft as military platforms.

Colonel Steve Wilson, USAF (deceased) stated that black military astronauts trained at a secret aerospace academy and later would operate out of Beale and Vandenberg Air Force Bases in California.

From those bases, these military astronauts regularly fly trans-atmospherically and out into space. One of the aerospace craft they use, Colonel Wilson reported, is the X-22A, Lockheed’s two-man anti-gravity disc craft.

Evidence for the existence of the X-22A first came to light during Operation Desert Storm when American soldiers (and most likely Iraqi soldiers as well) made sightings of disc-shaped craft in the desert hovering near to U.S. officers. People also made claims of seeing these craft fire intense beams of light that removed any trace of what previously sat at the location, apart from a circular charcoal-like burn mark on the ground.

A Desert Storm soldier stated the following: “In the first days film footage and especially Video-cams which a large number of G.I.s had were impounded so they wouldn`t capture any sensitive material.”

Dr. Richard Boylan states the following about the X-22A:

“The described disc was clearly an antigravity levitating aerial weapons platform in the U.S. arsenal, possibly a Lockheed X-22A two-man discoid craft, the real DarkStar, (of which the unmanned drone X-22 DarkStar is a front “cover” aircraft program to disguise this manned antigravity fighter disc.) Further, it appears that the real DarkStar manned discs come equipped with the latest Neutral Particle Beam weapons, which take apart the target at the molecular level. ET craft do not incinerate humans. Only human military fighters are so deployed. So this report does not deal with any extraterrestrial event.

It has been said that if the American people knew what the military had in their arsenal today, they wouldn’t believe it, and would think someone was fantasizing about a Lucas Star Wars movie episode.”