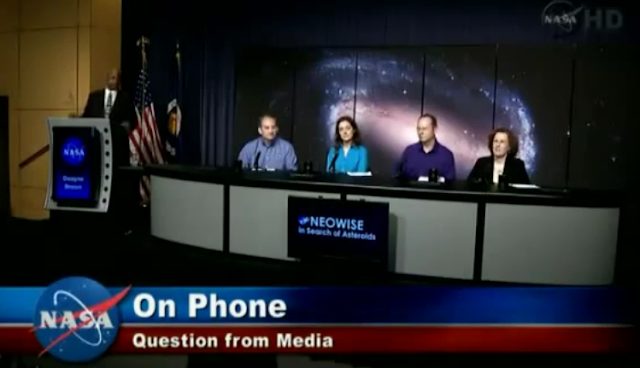 Sept. 29, 2011. NASA held a conference for updating information about the database of near-Earth asteroids in our solar system, tracked by Wide-field Infrared Survey Explorer (WISE) telescope. 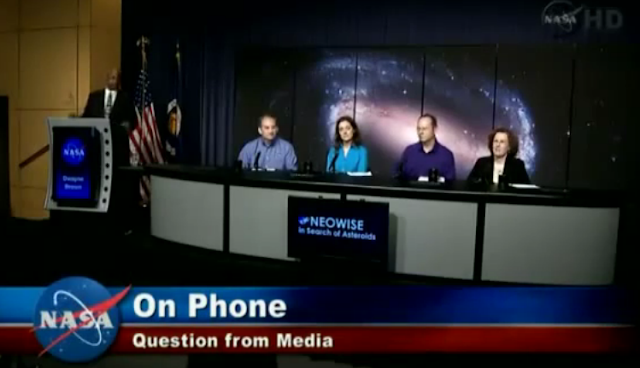 But things got really interesting when a phone caller asked NASA to deny the danger of Planet X (a.k.a. Nibiru).

Not only that Amy Mainzer (NEOWISE Principal Investigator, JPL) did NOT deny its existence, but she actually confirmed it, after tangling in explanations:

“Planet X is not coming to get us!” she said, basically acknowledging its existence.

After dodging the question for some time, she eventually continued: “We think that this (Planet X) is just … huh … just a sort of … if there’s something out there…could be a LARGE BODY IN A ROUGHLY CIRCULAR ORBIT!” — WHAT???

Without the mumbling and the ‘fix’ she basically says:

“Planet X is not coming to get us! … We think that this is just a sort of … a large body in a roughly circular orbit!”

But the phone caller pushes things even more, asking if there’s: “…anything else you wanted to say on that point?”

Amy Mainzer falls for the trap once again & begins speaking about brown dwarfs (basically acknowledging that Planet X is a brown dwarf — only visible with infrared telescopes):

“We were able to confirm the discovery of 100 new … huh … objects that are these very cool stars called brown dwarfs and … so … that’s very similar to what … huh … people are interested in looking for, so … we’ve actually found some of these are relatively close to the Earth.”

And this takes the acronym ‘Never A Straight Answer’ (NASA) to a whole new level.

For those of you who don’t know a lot about Planet X, please read my articles in the Nibiru section on my blog.