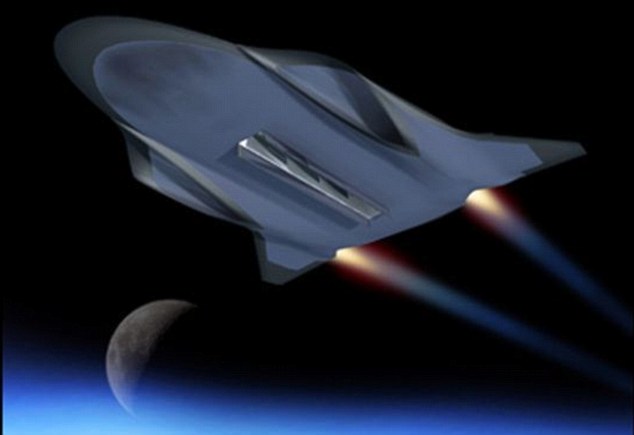 Hypersonic data is collected through extensive modeling and simulation, wind-tunnel testing and two experimental flight tests. The ultimate goal is a capability that can reach anywhere in the world in less than an hour.

Falcon HTV-2 is an unmanned, rocket-launched, maneuverable aircraft that glides through the Earth’s atmosphere at incredibly fast speeds—Mach 20 (approximately 13,000 miles per hour).  At HTV-2 speeds, flight time between New York City and Los Angeles would be less than 12 minutes. The HTV-2 vehicle is a “data truck” with numerous sensors that collect data in an uncertain operating envelope.

I. The first flight

Flight one achieved many “firsts”:

– Validated two-way communication with the vehicle;

– Verified effective use of the Reaction Control System (RCS);

The second and final planned flight test is scheduled for August 2011. First flight lessons learned, high-speed wind tunnel testing and computer simulations were used to improve aerodynamic models and to optimize the vehicle design and trajectory for flight two.

The goal of the second flight is to validate current assumptions and increase technical understanding of the hypersonic flight regime. More than 20 test assets will collect continuous flight data to achieve this goal.

How do you learn to fly at 13,000 miles per hour—a speed at which it would take less than 12 minutes to get from New York to Los Angeles? Or, how do you know whether a vehicle can maintain a long-duration flight while experiencing temperatures in excess of 3,500 degrees Fahrenheit—hotter than a blast furnace that can melt steel? And if you can fly, and withstand the extreme heat, how do you know if the vehicle can be controlled as it rips apart the air? How? You try it.

DARPA’s second flight test of the Falcon Hypersonic Technology Vehicle 2 is scheduled to launch Wednesday. The flight window is between 7:00am – 1:00 pm PDT from Vandenberg AFB, Calif., aboard an Air Force Minotaur IV rocket. 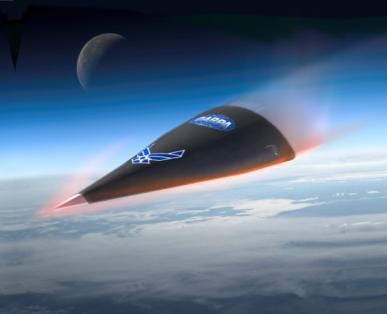 “Wind tunnels capture valuable, relevant hypersonic data and can operate for relatively long durations up to around Mach 15. To replicate speeds above Mach 15 generally requires special wind tunnels, called impulse tunnels, which provide milliseconds or less of data per run,” Schulz said. “To have captured the equivalent aerodynamic data from flight one at only a scale representation on the ground would have required years, tens of millions of dollars, and several hundred impulse tunnel tests.” According to Schulz, impulse tunnel testing is required to create a portion of Mach 20 relevant physics on the ground.

“And even then,” said Schulz, “we wouldn’t know exactly what to expect based solely on the snapshots provided in ground testing. Only flight testing reveals the harsh and uncertain reality.”

Approximately nine minutes into its first test flight in April 2010, telemetry assets experienced a loss of signal from the HTV-2. The vehicle’s onboard system detected a flight anomaly and engaged its onboard safety system—prompting the vehicle to execute a controlled descent into the ocean.

During its second test flight, “DARPA looks forward to conquering more unknowns about long-duration hypersonic missions.  We need to increase our technical knowledge to support future hypersonic technology development,” said Dave Neyland, director of DARPA’s Tactical Technology Office. “We gained valuable data from the first flight, made some adjustments based on the findings of an engineering review board to improve this second flight, and now we’re ready to put all of that to the test.”

For its second test flight, engineers adjusted the vehicle’s center of gravity, decreased the angle of attack flown, and will use the onboard reaction control system to augment the vehicle flaps to maintain stability during flight operations.

A technology demonstration and data-gathering platform, the HTV-2 is packaged in a special capsule atop the launch-ready Minotaur IV Lite rocket.

After the Minotaur rocket launches and nears orbit, HTV-2 will separate and fly at a hypersonic glide trajectory within the earth’s atmosphere Mach 20 speeds, approximately 13,000 miles per hour.

During the second flight test, more than 20 land, air, sea and space test assets will collect data needed to improve predictions, through modeling and simulation, of future hypersonic flight vehicle performance—ultimately leading toward the capability of reaching anywhere in the world in under an hour.

Today, DARPA attempted to fly the fastest aircraft ever built.  The Agency’s Falcon Hypersonic Technology Vehicle 2 (HTV-2) is designed to fly anywhere in the world in less than 60 minutes.  This capability requires an aircraft that can fly at 13,000 mph, while experiencing temperatures in excess of 3500F.  The second test flight began with launch at 0745 Pacific Time. 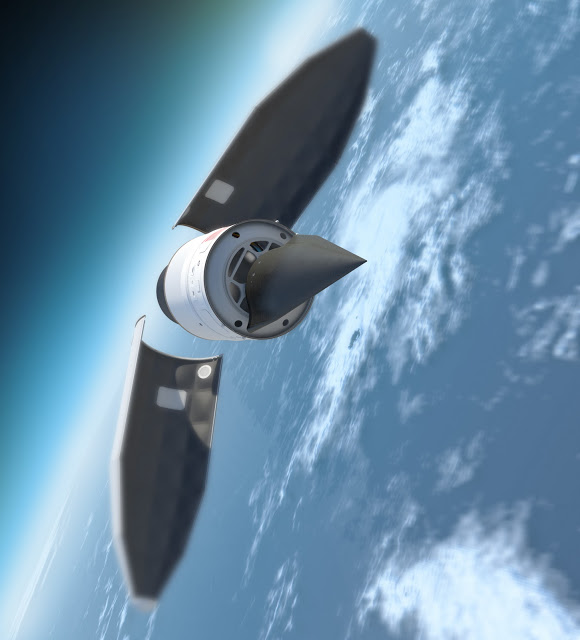 The Minotaur IV vehicle successfully inserted the aircraft into the desired trajectory.  Separation of the vehicle was confirmed by rocket cam and the aircraft transitioned to Mach 20 aerodynamic flight.  This transition represents a critical knowledge and control point in maneuvering atmospheric hypersonic flight.  More than nine minutes of data was collected before an anomaly caused loss of signal.  Initial indications are that the aircraft impacted the Pacific Ocean along the planned flight path.

“Here’s what we know,” said Air Force Maj. Chris Schulz, DARPA HTV-2 program manager and PhD in aerospace engineering.  “We know how to boost the aircraft to near space.  We know how to insert the aircraft into atmospheric hypersonic flight.  We do not yet know how to achieve the desired control during the aerodynamic phase of flight.  It’s vexing; I’m confident there is a solution. We have to find it.”


“Prior to flight, the technical team completed the most sophisticated simulations and extensive wind tunnel tests possible.  But these ground tests have not yielded the necessary knowledge.  Filling the gaps in our understanding of hypersonic flight in this demanding regime requires that we be willing to fly,” said DARPA Director Regina Dugan.

“In the April 2010 test, we obtained four times the amount of data previously available at these speeds.  Today more than 20 air, land, sea and space data collection systems were operational.  We’ll learn. We’ll try again. That’s what it takes.”

According to Schulz, three technical challenges exist within this HTV-2 flight regime.  They are categorized as aerodynamic; aerothermal; and guidance, navigation and control.  And each phase of flight introduces unique obstacles within these areas.

“To address these obstacles, DARPA has assembled a team of experts that will analyze the flight data collected during today’s test flight, expanding our technical understanding of this incredibly harsh flight regime,” explained Schulz.  “As today’s flight indicates, high-Mach flight in the atmosphere is virtually uncharted territory. ”

In the coming weeks, the assembled independent Engineering Review Board will review and analyze the data collected. This data will inform policy, acquisition and operational decisions for future Conventional Prompt Global Strike programs—the goal of which, ultimately, is to have the capability to reach anywhere in the world in less than one hour.

IV. DARPA HYPERSONIC VEHICLE SPLASH DOWN CONFIRMED
Flight 1 engineering changes believed effective
August 14, 2011
On Thursday, 11 August, the HTV-2 experienced a flight anomaly post perigee and into the vehicle’s climb.  The anomaly prompted the vehicle’s autonomous flight safety system to use the craft’s aerodynamic systems to make a controlled descent and splash down into the ocean. Controlled descent is a term typically associated with a human-in-the-loop directing or guiding the unscheduled landing of an aircraft.  For DARPA’s Hypersonic Technology Vehicle 2 (HTV-2) controlled descent takes on new meaning thanks to the vehicle’s safety system.

“We’ve confirmed that the HTV-2 made impact with the Pacific Ocean along its flight trajectory as planned in the event of an anomaly,” explained Air Force Maj. Chris Schulz, DARPA HTV-2 program manager and PhD in aerospace engineering. “This flight safety system is a significant engineering advance in that the system prompts a vehicle to monitor the parameters under which it is operating and exercise safety protocols completely autonomously should those parameters be breached.”

“According to a preliminary review of the data collected prior to the anomaly encountered by the HTV-2 during its second test flight,” said DARPA Director Regina Dugan, “HTV-2 demonstrated stable aerodynamically controlled Mach 20 hypersonic flight for approximately three minutes. It appears that the engineering changes put into place following the vehicle’s first flight test in April 2010 were effective. We do not yet know the cause of the anomaly for Flight 2.”
A detailed analysis conducted by an independent Engineering Review Board following the first flight test, prompted engineers to adjust the vehicle’s center of gravity, decrease the angle of attack flown and use the onboard reaction control systems to augment vehicle flaps during the vehicle’s second flight test. Those changes appear to have been effective. “An initial assessment indicates,” said Schulz, “that the Flight 2 anomaly is unrelated to the Flight 1 anomaly.”
During the reentry phase of the flight plan, the craft is traveling at Mach 20, under extreme conditions as it attempts to enter the glide phase of flight. In the coming weeks an independent ERB will investigate the most probable causes of the new anomaly encountered during the second test flight of HTV-2.
V. HYPERSONIC VEHICLE TEST SHOWCASES SIGNIFICANT FEATS
Initial data indicates significant improvement in predictive modeling
August 25, 2011

On Aug. 11, DARPA demonstrated stable aerodynamically controlled Mach 20 flight for nearly three minutes in its attempt to fly the fastest aircraft ever flown. This feat was the result of many scientific and technological advances. 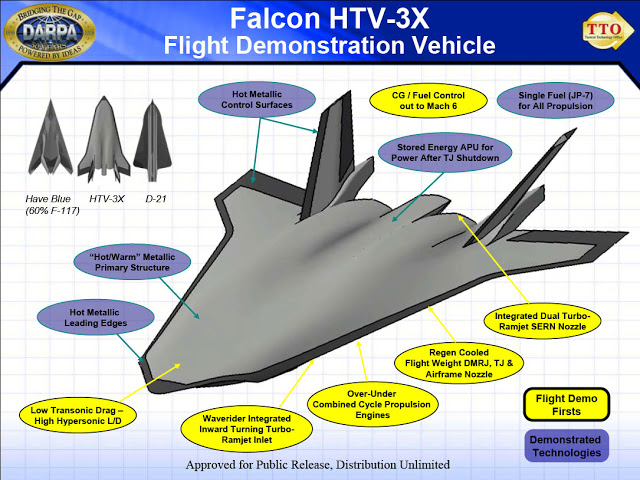 This is not an easy task.  According to Air Force Maj. Chris Schulz, HTV-2 program manager and PhD in aerospace engineering, “What the Minotaur IV did was make a three-point shot from the California coastline into a basket between California and Hawaii.”

Most launch vehicles spend very little time and perform minimal maneuvers inside the atmosphere. To deliver the HTV-2 to the required mission start point, the Minotaur IV spent its entire flight inside the atmosphere while safely and reliably performing a series of aggressive banks and turns.

Throughout the flight, more than 20 air, land, sea and space data collection systems were operational. Scientists believe that very high quality data collected from the combined test range assets will aid our further understanding of this unique flight environment.

Data collection assets also provided visuals of flight from the ground. “We were fortunate to also obtain handheld camera footage of the HTV-2 flight.  It gives us a visceral feel for what it means to fly at Mach 20,” says DARPA Director, Regina Dugan. The footage released today shows how rapidly a vehicle can travel from horizon to horizon at Mach 20. The video was captured from a handheld camera operated by a crewmember aboard the Pacific Tracker—the first sea-born telemetry collection asset able to visually monitor the HTV-2’s initial entry into the atmosphere.

As a test flight, with the goal to validate current assumptions and increase technical understanding of the hypersonic regime, successful collection of data by the largest collection of test assets ever assembled to monitor a test flight was critical. “Data collection was so important during HTV-2 flight tests that 25-30 percent of the total test flight cost was spent on collection assets,” explained Schulz.

It’s from the initial analysis of data collected by those assets that another preliminary data point emerges. “We’ve been working for more than 50 years to identify how to predict when the transition from laminar to turbulent flow will occur.  This allows us to assess when a vehicle is about to experience its highest drag and heat load. Initial assessment of the data indicates that our pre-flight models successfully predicted transition to within ten seconds of actual transition point,” explained Dugan. “If this information proves true upon further analysis, we’ll have a better understanding of overall system capability and flight dynamics—how far it can fly with more accuracy.” – Source: DARPA.mil

Even though the Falcon HCV is a military project, I am confident that one day we will understand the positive outcome of using similar technology for civilian use. Looking forward to that day.

THRIVE: What on Earth will it take? Previous post
Secrets in Plain Sight - Full Documentary Next post