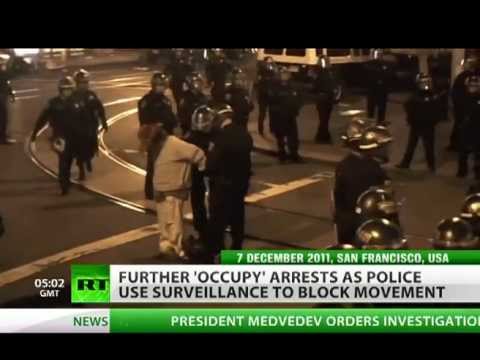 Occupy Wall Street: US Police is Addicted to Abuses – Shame on You!

First of all, the protesters have the right to be there! They are US citizens, unhappy of how the government is managing THEIR tax-money. The increasingly out of control debt, irrational money spending and big corporation & bank bailouts will collapse the floor from under our feet and we will end up jobless, homeless and starving to death – like it happened before. Not only that, but nobody will be blamed for this! Which leads me to the second issue.

The president and government members (of any given country) are not our bosses – in fact, we are their bosses. They offered their services in leading positions, to manage our money & the economy and we are the ones who chose them by vote (at least, this is the official version). Their duty was to take care of our well-being. They clearly were incapable of taking care of the country and its inhabitants, and now they must answer for their crimes!

While thousands of peaceful US citizens are unjustly imprisoned, no banker or politician is at least blamed – not to mention trialed or convicted. Why is nobody pointing out these things?

Finally, what the policemen must understand, is that the Occupy protesters are their friends, not their enemies. They are representing their interests as well, by pointing out the flows of our current society, in a peaceful manner. It’s shameful to see them in action – just look at them!