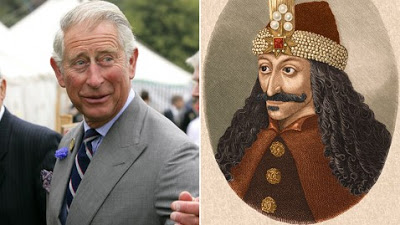 Prince Charles: “I Am A Descendant Of Dracula” + Reptilian Correlations (Historical and Biblical) 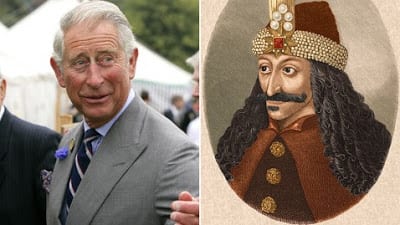 I ask those who are not familiar to my articles to be patient and read all the connections. Things may seem to be out-of-this-world at first, but I promise you that everything will perfectly tie together, as you’ll continue reading.

Count Dracula was a real person, a Romanian ruler (as I will later explain in detail). He was part of an old secret order, the Order of the Dragon. The Dragon is a reptilian variation, especially used in the Asian world. The Asian leaders claimed the throne for having Dragon blood (what in Europe is known as Blue Blood).

Also, the home of the Reptilian species is shaped like a dragon and is called the Draco Constellation. 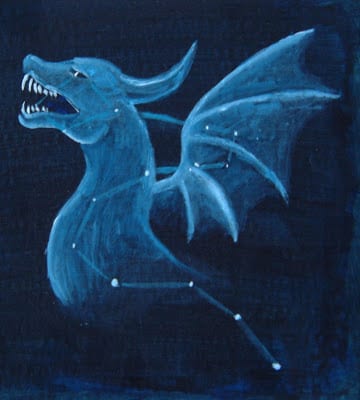 Count Dracula’s father was named Vlad Dracul. Drac means Devil in Romanian, and Dracul means the Devil. Remember, the devil is a serpent in the bible, a reptilian figure who deceived mankind.

Their royal seal was of course, a dragon (sometimes show with a Sumerian-God cross -later called Templar Cross- on its back): 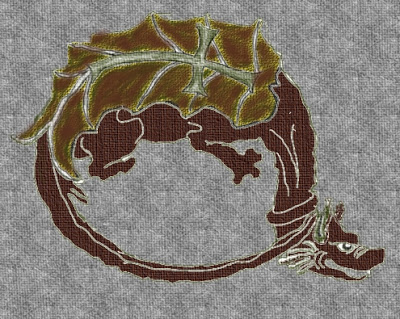 2. Gold Digger is also a reptilian accusation, for the first humans ever to live on Earth were gold miners (before being “hunters and gatherers”, as the official version states) with reptilian DNA.

But why gold miners? Gold could not have been used by the first humans for anything. Why would they put so much effort to mine for a metal without use? Not to mention they were not supposed to have the knowledge or the tools to mine it in the first place.

Amazing Article: The oldest Metropolis on Earth was built by the Anunnaki! (200,000 Years Old)

Search for our True history, the oldest cities on Earth have been built around gold mines and the first humans where gold miners. Including the first Sumerians and Africans. Also, both the Sumerian and African stories tell of Reptilian extraterrestrials who came to Earth and genetically modified humans to use them as slaves for mining gold (an indispensable metal for the more advanced ET races).

3. Crocodile wife (referring to Camilla, Duchess of Cornwall) is probably the easiest Reptilian-Connection.

4. Princess Diana herself referred to the British royal family as “lizards” and “literally not human”.

[4]. The popular princess went so far as to publicly refer to the British House of Windsor as “lizards” and “reptiles.” “They’re not human,” she said. [5] Diana grew to believe that the British monarchy, with all its hidden power, were her enemies. [6]. In Great Britain, all members of MI5, MI6 (British intelligence agencies), members of Parliament, and military officers swear an oath of loyalty to the monarchy, not to the United Kingdom. [5] [6]. In the U.K., the monarchy is the state. By revealing royal family secrets, Diana may have been committing “treason.” (Extract from a good article entitled: Diana Was the Target).

“The Queen Mother… now that’s a serious piece of wizardry. The Queen Mother is a lot older than people think. To be honest, the Royal Family hasn’t died for a long time, they have just metamorphosised. It’s sort of cloning, but in a different way. They take pieces of flesh and rebuild the body from one little bit. Because it’s lizard, because it’s cold-blooded, it’s much easier for them to do Frankenstein shit than it is for us. The different bodies are just different electrical vibrations and they have got that secret, they’ve got the secret of the micro-currents, it’s so micro, so specific, these radio waves that actually create the bodies. These are the energies I work with when I’m healing.

They know the vibration of life and because they are cold-blooded, they are reptiles, they have no wish to make the Earth the perfect harmony it could be, or to heal the Earth from the damage that’s been done. The Earth’s been attacked for zeons by different extraterrestrials. It’s been like a football for so long. This place was a bus stop for many different aliens. All these aliens, they could cope with everything, including the noxious gases.

They’re landing all the time and coming up from the bowels of the Earth. They looked like reptiles originally, but they look like us when they get out now through the electrical vibration, that life key I talked about. They can manifest how they want to. All the real knowledge has been taken out and shredded and put back in another way. The Queen Mother is “Chief Toad” of this part of Europe and they have people like her in each continent. Most people, the hangers on, don’t know, you know, about the reptiles. They are just in awe of these people because they are so powerful.

“Bal moral is a very, very nasty place. That’s somewhere they want to dig underground. They will find reptile fossils, it goes back that far. Don’t think of people like the Queen Mother and Queen Victoria, as different people. Think of them as the same person which after a while has had to replace their coat. When the flesh dies, that energy, while it’s dying, will be immediately up someone else’s jacksy (backside). It’s very vampire, worse than vampire.

They are not going to come to you with hooked teeth and suck you’re blood. Fear is their food, they can actually take fear and manifest it into a tangible thing. The key is the vibrational current. At that vibrational current, they can manifest anything from anything. Its like a holographic image. We are all minerals and water vibrating. This is all an illusion we are living in. That’s the secret. You know when the monarchy’s fallen, it’s not the end of it. They will manifest in another form. The reptiles have never been defeated and this is the closest they have come to it.

The reason they are so threatened today is because the Earth is in such trouble and the mental power of people is returning. This is their most frightening time, but this is not going to kill them. There are long centuries before it’s over yet. The difference this time is that it’ll be more difficult for them and they are going to have to settle for less and the Earth people are going to get more.

But even though these reptilian ones are fuckers, they are sad, pathetic beasts really, while humanity is galloping towards light. They’re just pathetic lumps of nastiness who aren’t going to win. I can’t talk about this everywhere because they would just go ‘Christine, get a white coat, put it on backwards, get out’. But I want an end to the bullshit.”

Update 1: In September 2011, the UK Police received a letter from the former mother in law of an undisclosed SAS sniper, known only as Soldier N, who boasted to his wife that his unit “arranged Princess Diana’s death”. (Source);

Update 2: Royal author John Morgan ­believes a squad of Special Forces soldiers disguised as press photographers had trailed Princess Diana. And they were first to the stricken car after the smash in a Paris road tunnel to make sure she did not survive. (Source);

II. The Windsors proudly admit to be Dracula’s descendants and show interest in Romania
Shocking for most, the royal British family begun investing in Romania, lately. To be more specific, in Transylvania, the exact home of blood-drinking Count Dracula. They’ve bought a rural farm with an orchard, and plan to invest even more from now on. Charles seems especially interested in Transylvania.
But even more shocking is Charles’ latest interview where he Proudly claims to be Dracula’s descendant: “The genealogy shows that I am descended from Vlad the Impaler”, Charles said:
In another interview, Charles admitted he would be tempted to become Romania’s king, if accepted by the people. Later that evening top ranking Romanian politicians and journalists said that after Ceausescu’s execution in 1989, the secret plan was indeed for the British royal family to take over Romania’s crown.
III. Count Dracula and the Reptilian Correlations

As I was saying in the beginning, this lesson started this morning, with a call from a close friend. He told me of a 1979 Romanian movie about the wars of Vlad III the Impaler, also known as Vlad Dracul (the Devil) or more commonly Count Dracula.

He was a real person, a Romanian ruler and the son of Vlad II Dracul. He remained in history as one of the bloodiest rulers, who used to impale his prisoners of war after each battle. It was a very sadistic and painful death, which contributed to his grim notoriety. But there are also legends speaking of darker rituals, like blood drinking and eating bread soaked in the blood of his victims – something that the Romanian historians, of course, ignore or deny.

In this movie that I was talking about, there is a fragment where a peasant child asked his father why were Vlad the Impaler and his father known as devils. Strangely, the father explained that they always wore dragon necklaces on their necks.

(Of course, the common people were probably unaware that both Dracula and his father were members of the Order of the Dragon. This order came to the public’s attention in 1408 when new members were publicly accepted, but it was probably much older).

At first, it seems that the child asked one thing (about devils) and his father answered something different (about dragons), but his father was in fact correct. It is something that I came across at least a couple of times before, but I was unable to fully comprehend at that time. In older times, ‘dragon’ was actually synonymous to ‘devil’ (or at least in the old Romanian dialect).

In other words, Vlad the Devil also meant Vlad the Dragon … the Reptilian.

“It is puzzling why the order chose a dragon as their insignia knowing that, in the traditional Christian heraldry, it is associated to the malefic powers defeated by St. George”. Puzzling indeed…the “evil power” in religion is always represented by Satan or the devil.

Paintings showing St. George slaying a dragon (a devil, a reptilian), are displayed in most Christian and especially Orthodox-Christian churches. 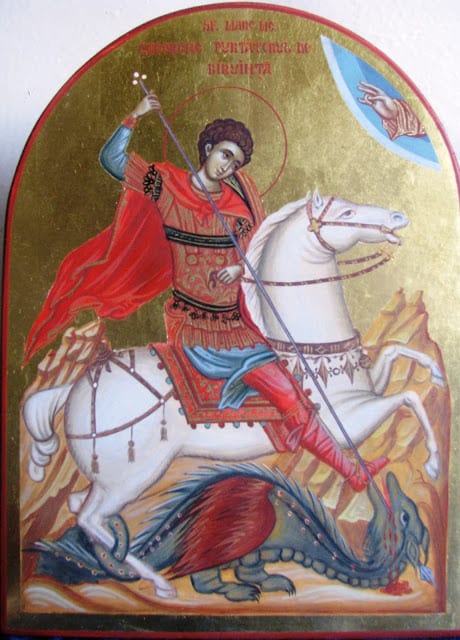 And I also have biblical evidence to back up my claims! Get ready for this one – I find it to be amazing! The evidence comes from the Apocalypse of Saint John the Apostle:

12:9. And the great dragon was cast out, that old serpent, called the devil and Satan, who deceived the whole world: he was cast out into the earth and his angels were cast out with him.

Pretty amazing, isn’t it? Click to Read the entire article: THE APOCALYPSE/REVELATIONS OF ST. JOHN THE APOSTLE

And there is one more connection to make here (if news to anyone): the same bloodline family controls the entire planet.
Watch video: ALL U.S. Presidents Except One Related to One King of England. This means that all of them are related to the Windsors and to Vlad the Reptilian. The same bloodline controls the entire planet, all of them having undiluted reptilian extraterrestrial DNA. Inside the secret societies, the high ranking members know the truth. They understand their origins and respect the ancient agenda: mankind’s enslavement.
Genetic Modification – Fact or Fiction?

It’s not science fiction for a superior race to genetically modify a lesser one to suit their purpose. WE are doing this today, with both plants and animals (GMO food and animals).

And because we can combine our DNA with that of different animals, we can create human-animal hybrids. And that’s the reason why is officially forbidden to do it.

Understanding that genetic modifications are not science fiction at all, why is it so hard for some people to accept the possibility of extraterrestrial intervention in our DNA, in the past? Especially if so much evidence points in this direction.