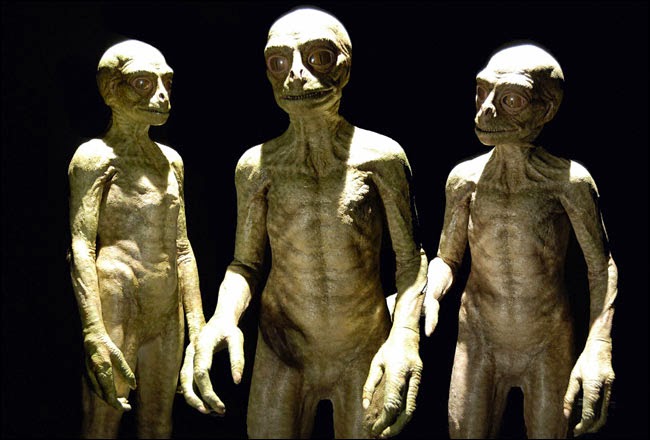 Famous chemist Ronald Breslow PhD has recently released a paper (i.e. “Could ‘advanced’ dinosaurs rule other planets”) explaining the possibility that an ancient advanced Reptilian species could exist somewhere in the universe. The paper was published by the American Chemical Society.

(American Chemical Society) – “New scientific research raises the possibility that advanced versions of T. Rex and other dinosaurs — monstrous creatures with the intelligence and cunning of humans — may be the life forms that evolved on other planets in the universe.”

“We would be better off not meeting them”, concludes the study, which appears in the Journal of the American Chemical Society. 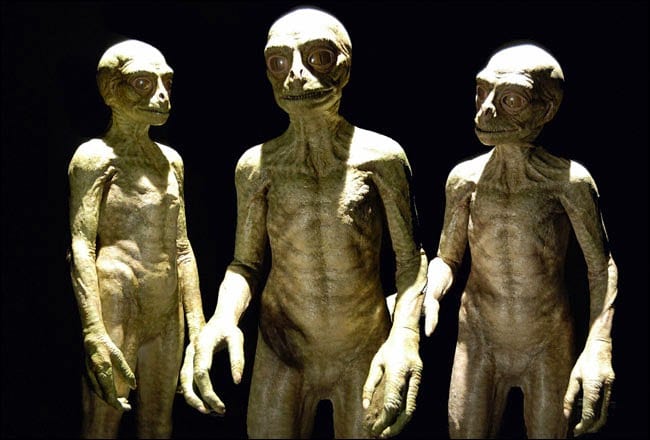 In the report, noted scientist Ronald Breslow, Ph.D., discusses the century-old mystery of why the building blocks of terrestrial amino acids (which make up proteins), sugars, and the genetic materials DNA and RNA exist mainly in one orientation or shape. There are two possible orientations, left and right, which mirror each other in the same way as hands. This is known as “chirality.”

In order for life to arise, proteins, for instance, must contain only one chiral form of amino acids, left or right. With the exception of a few bacteria, amino acids in all life on Earth have the left-handed orientation. Most sugars have a right-handed orientation. How did that so-called homochirality, the predominance of one chiral form, happen?

Breslow describes evidence supporting the idea that the unusual amino acids carried to a lifeless Earth by meteorites about 4 billion years ago set the pattern for normal amino acids with the L-geometry, the kind in terrestial proteins, and how those could lead to D-sugars of the kind in DNA.

“Of course,” Breslow says, “showing that it could have happened this way is not the same as showing that it did.” He adds: “An implication from this work is that elsewhere in the universe there could be life forms based on D-amino acids and L-sugars. Such life forms could well be advanced versions of dinosaurs, if mammals did not have the good fortune to have the dinosaurs wiped out by an asteroidal collision, as on Earth. We would be better off not meeting them.”

The Dinosauroid Hypothesis (a.k.a. Sapient Dinosaurs) 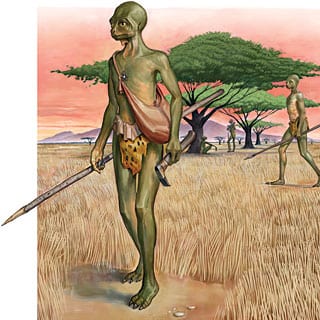 “In 1982, Dale Russell, then curator of vertebrate fossils at the National Museum of Canada in Ottawa, conjectured a possible evolutionary path for Troodon, if it not had perished in the K/T extinction event 65 million years ago, suggesting that it could have evolved into intelligent beings similar in body plan to humans.

Over geologic time, Russell noted that there had been a steady increase in the encephalization quotient or EQ (the relative brain weight when compared to other species with the same body weight) among the dinosaurs.

Russell had discovered the first Troodontid skull, and noted that, while its EQ was low compared to humans, it was six times higher than that of other dinosaurs. Russell suggested that if the trend in Troodon evolution had continued to the present, its brain case could by now measure 1,100 cm3; comparable to that of a human.

Troodontids had semi-manipulative fingers, able to grasp and hold objects to a certain degree, and binocular vision. Russell proposed that his “Dinosauroid”, like members of the troodontid family, would have had large eyes and three fingers on each hand, one of which would have been partially opposed. Russell also speculated that the “Dinosauroid” would have had a tootheless beak.

As with most modern reptiles (and birds), he conceived of its genitalia as internal. Russell speculated that it would have required a navel, as a placenta aids the development of a large brain case. However, it would not have possessed mammary glands, and would have fed its young, as some birds do, on regurgitated food. He speculated that its language would have sounded somewhat like bird song.” — Wikipedia; 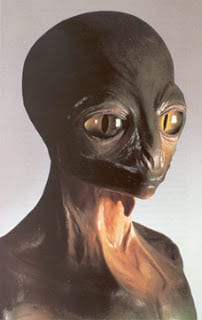 (1977) Aritsune Toyota – “A Japanese science fiction writer was one of the earliest proposers of the idea of sapient dinosaurs. Toyota was intrigued by the theory of the “Warm-blooded Deinonychus” (John Ostrom, 1964) and developed the idea that some kinds of dinosaurs would have evolved to acquire intelligence.

He referred to The Hot-blooded Dinosaurs (Desmond, Adrian J., 1975, Rosemarie Buckman, Oxfordshire) and constructed a theoretical model of what they might have been like. He first published his ideas as science fiction in the novel Kako no kageri (A shadow of the past) in 1977. In the story he described them as reptilian humanoids who use bone tools for hunting, speak a primitive language, and build a rudimentary society. The creature was supposed to have evolved from a dinosaur similar to dromaeosaurus.

A year later, Toyota received advice from Japanese zoologist Tatsuo Saneyoshi, and began striving for more zoological authenticity on details. He then authored Zoku jikanhō keikaku (Prospectus for the spatiotemporal cannon part 2). He continued to study thropoda, and serialized his novel as Dainosaurusu sakusen (The plan of the dinosaurs) in 1979.” – Wikipedia; 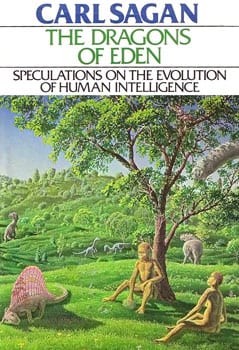 (1977) Carl Sagan – “In his 1977 book, The Dragons of Eden: Speculations on the Evolution of Human Intelligence, author Carl Sagan speculated about the related genus Saurornithoides evolving into ever more intelligent forms in the absence of any extinction event. In a world dominated by Saurornithoides, Sagan mused, arithmetic would be Base 8 rather than Base 10.”

(1978) Harry Jerison – “American psychologist Harry Jerison suggested the possibility of sapient dinosaurs. In 1978, he gave a presentation titled “Smart dinosaurs and comparative psychology”, at a meeting of the American Psychological Association. According to his speech, dromiceiomimus supposedly could have evolved into a highly intelligent species like human beings.”