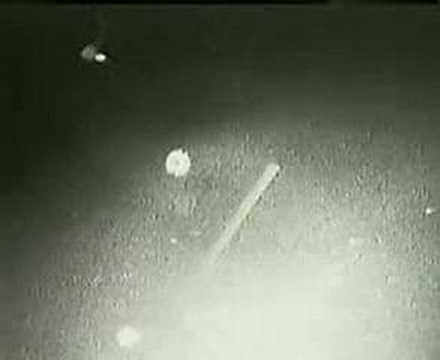 On Sunday, February 25, 1996, the Space Shuttle Columbia deployed an experimental tether into orbit.

The experiment was called the Tethered Satellite System (TSS- 1R) and it’s purpose of this was to attempt to generate electricity by utilizing Earth’s magnetic field.

Unfortunately the tether broke so the experiment was not a success, although approximately five hours of data were recorded.

What really made “The Tether Incident” famous was the appearance of many unidentified flying objects (UFOs) clearly visible in the NASA footage.

One of the most controversial segments of video footage in the NASA archives is the TSS-1R “tether incident” footage, shot back in early 1996 during shuttle mission STS-75. As compelling as that original raw video is however, the addition of flightpath/velocity tracking plots and the application of Image-Stabilization/Shake-Reduction techniques can provide a new and more revealing way of analyzing what is considered by many to already be some rather impressive evidence.

In addition to the three flightpath/velocity “stable sequences” analyzed in this presentation, I have also included several pan/tilt/zoom “shake sequences” from the raw flyby footage as well, showing those segments with “Image-Stabilization/Shake-Reduction” applied in an effort to make them easier to interpret. In those motion-corrected examples, I elected to use the highly visible 19695-meter-long free-drifting tether as the target feature to match and mount each successive frame of raw footage to.

Unfortunately, there are several negative factors related to the camera system employed to shoot this footage, and together those issues serve to make these scenes rather difficult to properly stabilize. Firstly, any pan or tilt commands sent to the camera’s two-axis PTU (Pan/Tilt Unit) result in very abrupt shifts to the FOV which are immediately followed by a brief period of servo/clutch bouncing. This bouncing effect is caused by the PTU having to absorb the inertial forces generated when the mass of the camera body (mounted to the PTU) was rapidly panned and/or tilted.

The lack of positive control where the camera struggles to return the scene to a normal stable state is most obvious in the higher magnification sequences, with the “bouncing” effect appearing to be due to the astronauts sending the camera movement commands to the PTU using what was called HIGH-RATE control mode (12 degrees of camera movement per second) rather than the far-less-abrupt LOW-RATE movement setting (1.2 degrees per second) that should have been employed.

Stabilization of these shake sequences is further complicated by the gamma, gain and iris (f-stop) control settings of the camera, which during the tether flyby appears to have been set in what was called “Black Stretch” (or “night”) mode.

“Black Stretch” provided the astronauts and MCC an additional gain output capability that improved the camera’s low-light viewing characteristics, but an undesired consequence was that whenever the rapid (HIGH-RATE) camera movement occurs and the FOV bounces, it results in rather severe contrast trailing effects (residual ghosting) that bleeds light off each visible object in a direction 180-degrees opposite of the camera movement. This obfuscates the scene by significantly lowering the number of stable (or near-stable) frames available for inclusion in the shake-corrected sequences.

Making matters even worse is the fact that we are forced to contend with an absolutely brutal contrast gradient/reflection that reveals itself across the full FOV during each of the zoomed-in sequences. The appearance of this gradient and its effect on the scene during stabilization can be seen quite readily in the sequence I show starting at the 2:15 mark.

When the initial camera movement and follow-on bouncing occurs in the raw footage, the gradient remains essentially stable while the objects in the FOV move around. When the scene is stabilized however, the camera movement is effectively canceled out but the once-stable gradient/reflection, because it is a product of the camera/lens system, now appears to bounce in the FOV instead, with the gradient divide crossing back and forth over the relevant objects in frame and blurring them further.

Still, even with all those negatives working against us, these motion-corrected sequences do provide a different and slightly cleaner look at the tether footage, so I felt they were worthy of inclusion here.

Scientific Lecture: Getting Ready For the Coming 'Age of Abundance' Previous post
How to Clean Up the Pineal Gland: 7 Easy Steps Next post