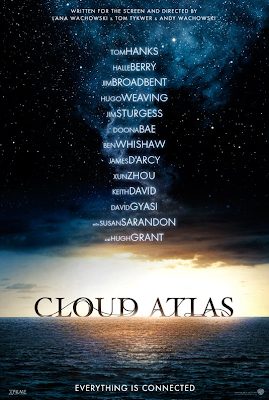 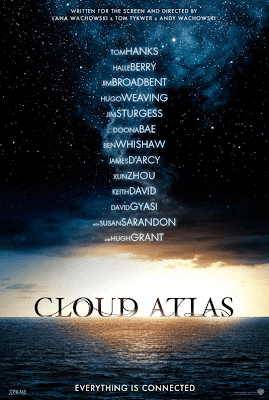 I want to give you all a heads up to “Cloud Atlas“, a movie to hit the US theaters on October 26th, 2012 and open internationally early next year. The movie is based on David Mitchell’s novel with the same name and the plot “consists of six nested stories that take the reader from the remote South Pacific in the nineteenth century to a distant, post-apocalyptic future.”

The plot summary, according to imdb: “An exploration of how the actions of individual lives impact one another in the past, present and future, as one soul is shaped from a killer into a hero, and an act of kindness ripples across centuries to inspire a revolution.”

I have the highest expectations for this movie, especially because it’s directed and produced by the Wachowski brothers. They have previously wrote and directed one of my all time favorite movie, The Matrix, and also wrote (the screenplay) and produced the very inspiring “V for Vendetta“.

If you don’t want to stumble across tons of spoilers, I suggest you not to watch the extended version of the trailer, nor to research any further into the plot. The following trailer should be enough to get your attention, without giving too much of the plot’s key moments:


Cloud Atlas has all the ingredients for my kind of blockbuster: deals with a controversial fact (reincarnation and the karmic law, in this case), it’s produced by the Wachowski brothers, it has a big budget and a great cast that includes A-listers like: Tom Hanks and Halle Berry. So, I’m hoping it will live up to its expectation!
Why Did NASA Bombed the Moon? Previous post
Former CNN Reporter Exposes Their Censorship Next post