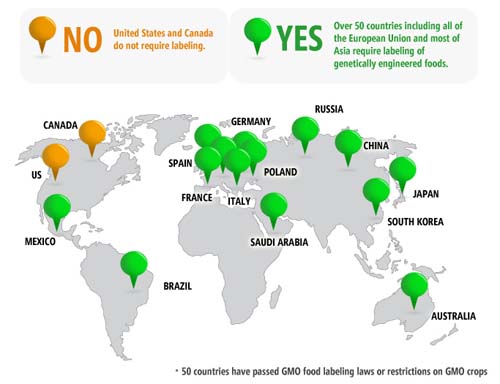 Just how much is it worth to chemical giants like Monsanto to make Proposition 37 – a bill that would require labeling of genetically engineered food – go away?

Enough to contribute $4.2 million so far to a campaign to defeat it, that’s how much.

Monsanto’s not the only major chemical company hoping to defeat this measure. Dupont ($1.27 million) and Dow Agro ($1.18 million) are contributing millions to fight our right to know what’s in the food we eat.

Why are You Being Kept in the Dark About What’s in Your Food?
Monsanto is the acknowledged leader responsible for the genetic changes in our food system – the mother of biotechnology in agriculture and creator of other products that have included Agent Orange1, PCBs2, DDT3, Recombinant Bovine Growth Hormone (rBGH) and aspartame4.

How Monsanto became such a ringmaster is crucial to understanding why Americans are not allowed to know if their food has been genetically engineered by simple labeling like 50 countries around the world do, including Russia, China and the entire EU. 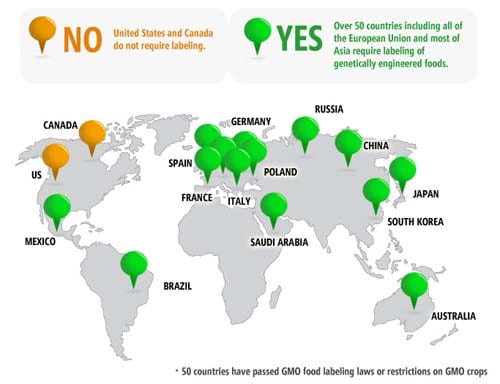 Monsanto influenced President Ronald Reagan’s administration back in 1986 to assure genetic engineering would be kept away from the public forum. Monsanto’s power has been further enhanced through each administration, adding more influence with each federal appointment.

Even in the past year, Monsanto has directly supported at least 65 candidates for federal office in the 2012 elections, with significant dollars “donated” to the chairs and leadership of the House and Senate Ag Committee.

Who’s Really in Charge of GE Food Safety?
Who is ensuring the safety of Monsanto’s products? Not Monsanto.

“Monsanto should not have to vouch for the safety of biotech food. Our interest is in selling as much of it as possible. Assuring its safety is the F.D.A.’s job” – Philip Angell, Monsanto’s director of corporate communications. “Playing God in the Garden” New York Times Magazine.

And neither is the US FDA…The FDA has not conducted a single independent test of any genetically engineered product. The agency simply accepts the testing completed and provided by the biotechnology corporations like Monsanto. The FDA makes this very clear,

“Ultimately, it is the food producer who is responsible for assuring safety” – FDA, “Statement of Policy: Foods Derived from New Plant Varieties” (GMO Policy), Federal Register, Vol. 57, No. 104, p. 229

Does that make you a bit concerned about the integrity of our food safety system? There are many variables to consider with these genetically engineered foods. GMOs are living, synthetic organisms that can reproduce and proliferate, they can mutate and migrate. Can we trust a small group of chemical companies to control and monopolize our food and restructure the world’s food system?

The USDA has implemented a new fast-track process that is a part of efforts by the Secretary of Agriculture, Tom Vilsack5, to “transform the USDA into a high-performing organization that focuses on its customers” – namely big biotech bullies like Monsanto, Dow, Dupont, BASF, and Syngenta. The USDA recently posted 12 new genetically engineered (GE) crop submissions for public comment, and nine are under the new fast-tracked process. It’s no coincidence that Vilsack was named Governor of the Year by the Biotechnology Industry Association in 2001…

Former United States Secretary of Agriculture (served from 1995 until 2001), Dan Glickman, was a big promoter for biotechnology and pushed for these products to be sold in Europe to secure profitable exports. He concluded after his USDA departure,

“What I saw generically on the pro-biotech side was the attitude that the technology was good and that it was almost immoral to say that it wasn’t good because it was going to solve the problems of the human race and feed the hungry and clothe the naked. And there was a lot of money that had been invested in this, and if you’re against it, you’re Luddites, you’re stupid. There was rhetoric like that even here in this department. You felt like you were almost an alien, disloyal, by trying to present an open-minded view on some of the issues being raised. So I pretty much spouted the rhetoric that everybody else around here spouted; it was written into my speeches.” — (Read complete article on mercola.com).