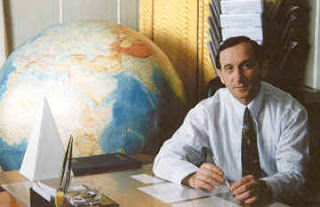 Dr. Alexander Golod, PhD. has been doing Russian pyramid research in the former Soviet Union since 1990. This research involved the construction of over twenty large pyramids in 8 different locations in Russia and Ukraine.

The pyramids were built in many places including Moscow, Astrakhan, Sochi, Zoporozhye, Voronezh, Belgorod, the Tver Region, Krasnodar, Tolyatti, Uzbekistan, and France.

All the Russian pyramids are made of fiberglass with the largest is standing an incredible 144 feet high (44 meters) tall, and weighing in at over 55 tons. Built at cost over 1 million dollars this Russian pyramid is a modern wonder.

Many different experiments are being done using these pyramids. They include studies in medicine, ecology, agriculture, physics, and health sciences.

What is significant about this work is that it is being carried out by top scientists in Russia and Ukraine and not fringe elements or unknown inventors.

Some of the amazing pyramid power research being done is showing great promise for all mankind.

4. Soon after construction of the Lake Seliger pyramid a marked improvement of the ozone was noted above the area;

5. Seismic activity near the pyramid research areas are reduced in severity and size;

6. Violent weather also appears to decrease in the vicinity of the pyramids;

7. Pyramids constructed in Southern Russia (Bashkiria) appeared to have a positive effect on oil production with oil becoming less viscous by 30% and the yield of the oil wells increased according to tests carried out by the Moscow Academy of Oil and Gas.

8. A study was done on 5000 prisoners who ingested salt and pepper that had been exposed to the pyramid energy field. The test subjects exhibited a greatly reduced violence rate and overall behavior was much improved.

9. Standard tissue culture tests showed an increase in survival of cellular tissue after infection by viruses and bacteria;

10. Radioactive substances show a decreased level of radiation inside the pyramid;

11. There are reports of spontaneous charging of capacitors;

12. Physicists observed significant changes in superconductivity temperature thresholds and in the properties of semi-conducting and carbon nano materials.

13. Water inside the pyramid will remain liquid to minus 40 degrees Celsius but freeze instantly if jostled or bumped in any way.

It is interesting to note that results seem to show that increasing the height of the pyramid improves the quality of the results.

So, as you can see from this brief introduction, there is much we have to learn about the natural forces around us. The Egyptians knew some of this when they designed the great pyramids at Giza. However, with modern scientific research techniques it is now becoming possible to gain even more insight and benefit from Russian Pyramid Power! — Further Reference;

David Wilcock talks about the Russian Pyramid Research Program, based on the available factual information

Recorded in September of 2009 at Project Camelot’s Awake and Aware in LA Conference.
New Secrets Of The Pyramids Revealed Previous post
New York Faces Most Intense Storm in History Next post