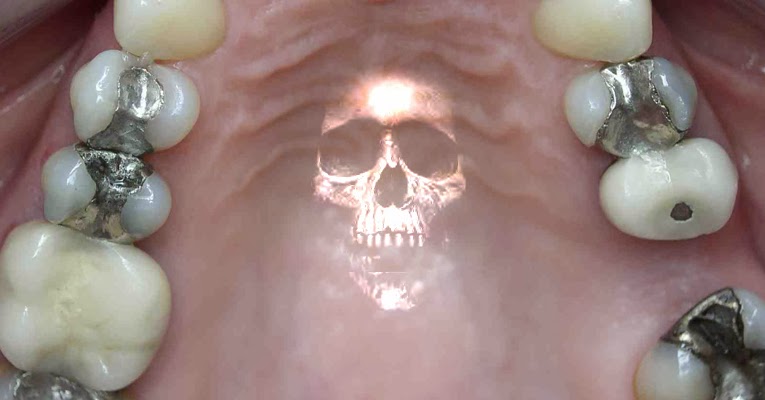 Jim asked me: “How can i get mercury fillings removed safely? I hear if they are just drilled out that could expose you to massive doses of mercury.”

Must Read: Amalgam Fillings Leach Mercury Vapor Into The Brain;

I have done some research and it turned out that you are right. It is actually not enough to have your mercury fillings drilled out, because the interaction between the dentist’s drill and the amalgams creates vapors of mercury which – without the proper protection – the patient can breath into the sensitive lung tissue.

Once again, I have found an wonderful article on the Natural News website, which is in fact Mike’s personal experience with this situation: 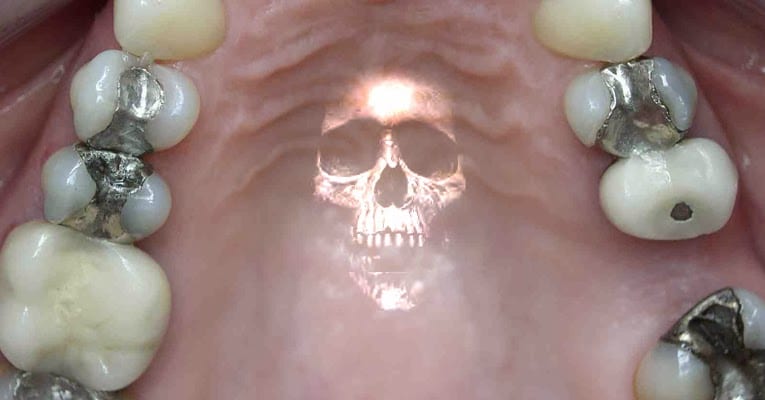 “Here’s a great idea: Let’s take one of the most toxic elements on the periodic table and put it in people’s mouths. That’s exactly what dentists have been doing in the United States for decades, as they’ve been filling dental cavities with none other than mercury.

Of course, they call them “silver” fillings, but they’re really a combination of silver and mercury, which is, again, one of the most toxic substances on the periodic table of elements.

At the same time, dental clients are increasingly realizing they need to get that mercury removed, because as you chew and breathe, some of that mercury is being ingested by your digestive tract or inhaled into your lungs. Little by little, those mercury fillings disappear out of your teeth. Where do they go? Right into your body.

So people want to get those mercury fillings removed. There have been some amazing testimonials to the kind of health recoveries people have experienced once they remove mercury from their mouths. Some people have been diagnosed with fibromyalgia, for example, and then had their symptoms completely vanish within 30 days of removing all the mercury in their mouth.

Mercury is also known to promote Alzheimer’s disease, dementia and other nervous system disorders. However, when it comes to removing mercury, too often we’re still in the dark ages of modern dentistry, because a lot of dentists don’t know how to properly remove mercury from your mouth.

In this article, I’m going to describe how to get mercury removal done right. If you’re a dentist reading this, make a note: this is the new standard of mercury removal. And if you’re not offering this service to your clients, you should consider adopting it, because people will be increasingly demanding this kind of service down the road.

As a dental customer, the first thing you want to do is find a dentist who will actually agree to remove the mercury from your mouth. Some dentists will look at you with a degree of scorn and say, “Oh, that’s hogwash. Mercury is great for you. See, I chew on mercury every single day and I’m fine.”

So, you’ve got to find a dentist who’s willing to take the mercury out of your mouth. The best thing to do is visit a natural health-oriented dentist if you can find one in your area. I’m fortunate enough to be working with one of the most experienced and well-known natural health dentists in the country. His name is Dr. Steven Swidler, at Medicine Wheel Dental, and let me tell you how he removes mercury from your mouth.

I went in to see Dr. Swidler and told him I had already had all of the mercury removed from my mouth. How did I know that? Because my previous dentist, who I had convinced to remove the mercury, told me he had completed the job. Well, as it turned out, Dr. Swidler looked at my mouth and found there was still quite a bit of mercury in there. Go figure.

So, don’t assume just because a conventional dentist told you the mercury’s gone, that it actually IS gone. You might want to get a second opinion, because I’ve been walking around with mercury in my mouth for a couple of years, thinking it was gone.

So Dr. Swidler said, “Let’s take it out,” and on the next visit he proceeded to do so. First he gave me 3,000 mg of vitamin C. This is to boost the antioxidants in your system and help nutritionally protect you from the mercury. Knowing something about chlorella and superfoods, I also took chlorella before that appointment, because chlorella binds with heavy metals and prevents them from being absorbed by your system.

The next thing he did was put oxygen on my nose only, so I could breathe through my nose and get fresh oxygen. Why is this important? Because, when dentists start drilling out the mercury, they’re creating mercury vapor, or airborne mercury particles, and you certainly don’t want to be inhaling those into the delicate tissues of your lungs. So, you need to get protection by breathing oxygen.

Next, I saw Dr. Swidler and his assistant putting on what appeared to be gas masks. They were actually facemasks that filter out volatile organic compounds and particulate matter. This was to protect them from the mercury. Finally, they stuffed what I’m sure was enough cotton in my mouth to weave an entire pair of jeans.

They used constant suction and washing to get the mercury out of my mouth as they were drilling it out. After all of this was done, they had me rinse my mouth out without swallowing, making sure I got any extra mercury out of the way.

It was replaced with a resin compound that contains no mercury whatsoever. This is the proper way to get mercury removed from your mouth, and if your dentist isn’t using a similar technique, then he or she is unnecessarily exposing you to mercury vapor or particles, just as you think you’re getting the stuff removed from your mouth.

If you are interested in pursuing mercury removal — by the way, I strongly recommend you get all the mercury taken out of your mouth as quickly as possible for a variety of health reasons — make sure you get it done right so you don’t expose yourself to mercury vapor or particles during the removal process, or else the removal can be far more toxic than just leaving it in place. However, a good removal will, of course, get this heavy metal out of your body in the safest way possible, without exposing you to dangerous vapor.

As a follow up to this, it’s interesting to note there are still many dentists in this country who are putting mercury into people’s mouths. I find that absolutely appalling. It’s something that should be relegated to the dark ages of modern dentistry. Then again, dentists are also many of the same people who are still promoting the ingestion of a highly toxic chemical called fluorosilicic acid, which is sourced from the waste products of smoke stacks and industrial incinerators.

This fluorosilicic acid is mislabeled “fluoride” and then dripped into the water supply based on the advice of half-crazed dentists whose mouths are apparently filled with lots of mercury, because they think they alone have the right to determine whether an entire population should be medicated with a highly toxic substance like fluorosilicic acid.

I’ve been to meetings where dentists were up-in-arms insisting the entire population, no matter what level of fluoride they might be consuming elsewhere, needed to be medicated with this, and should have no choice whatsoever in the matter. That is, in fact, the current position of the American Dental Association — once again, another “health” association that seems to have completely lost its mind.

Even if they say fluoride is good for your teeth, it’s not the same stuff dripping into the water supply. Naturally-occurring fluoride is not the stuff obtained by scraping the chemicals off the inside of industrial smoke stacks.

That’s where they’re getting fluorosilicic acid, which is what most municipalities are actually dripping into their water supply. Seriously, if you take a look at modern dentistry, it’s a house of horrors. Some of the most ignorant and unscientific procedures of all are practiced in dentistry.

A lot of it is just complete quackery, and if you don’t visit a naturopathic dentist or a natural health oriented dentist, you are undoubtedly subjecting yourself to some very unhealthy side effects simply from being a patient of modern dentistry.”

Ron Paul's Farewell Message to America Previous post
Update: Top 5 Reasons You Should do a Liver Cleanse – Today! Next post