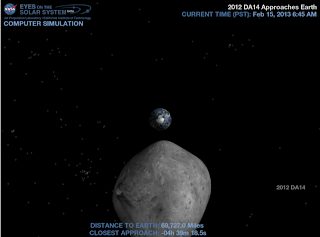 Meteor Exploded Over Russia Injuring Hundreds — Why Haven’t We Been Warned?

Chelyabinsk, Russia — As many as 950 people were injured after meteor exploded over the Russian Urals. YouTube was flooded with videos of one or multiple meteor/s braking up into pieces above the Russian city of Chelyabinsk (all videos bellow). The resulting explosion/s shuttered apartment windows and doors, collapsed roofs and created panic.

Russian officials reported around 400 injured at first, but several hours later the numbers reached 950. It is still unclear if pieces of the meteor/s actually hit the ground, or the damage was solely caused by the generated shock wave of the explosions.


Adding to the tension, an asteroid will near-miss Earth today. Are the two events related?

NASA: “Small near-Earth asteroid 2012 DA14 will pass very close to Earth on February 15, so close that it will pass inside the ring of geosynchronous weather and communications satellites.” 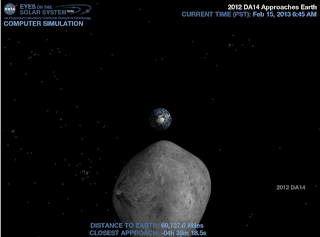 Picture Credit: NASA
Even though the asteroid will come very close to Earth, NASA says there is nothing to worry: “NASA’s Near-Earth Object Program Office can accurately predict the asteroid’s path with the observations obtained, and it is therefore known that there is no chance that the asteroid might be on a collision course with Earth. Nevertheless, the flyby will provide a unique opportunity for researchers to study a near-Earth object up close. Here are the facts about the safe flyby of Earth of asteroid 2012 DA14 — a record close approach for a known object of this size.”
I will continue to update the article, because I really want to find out if the meteor that broke apart over Russia is related in any way to the asteroid that will pass very close to Earth later today. I will also continue to add new videos (as soon as uploaded) and last minute information. Stay tuned.
#1 UPDATE: Possible impact zone
#2 UPDATE: Russian MP blames meteor shower on US secret arms test

” ‘Those were not meteorites, it was Americans testing their new weapons,’ Mr. Zhirinovsky confessed to journalists. ‘[US Secretary of State] John Kerry wanted to warn [Russia’s Foreign Minister] Lavrov on Monday, he was looking for Lavrov, and Lavrov was on a trip. He meant to warn Lavrov about a provocation against Russia,’ he said.

The US Department of State has recently said that John Kerry has been unable to get in touch with Russia’s Sergei Lavrov, who is away on his Africa tour, for three days to discuss urgent global issues, including the North Korean threat and the escalating Syrian crisis.” — Source.
#3 UPDATE: Tim O’Brien, associate director of the University of Manchester’s Jodrell Bank Observatory:

“This reasonably large chunk of rock was moving faster than the speed of sound, maybe 20,000 miles per hour. It made a sonic boom in the atmosphere, and that hit buildings and shattered windows. That is what seems to have caused the injuries. It’s a completely abnormal experience. This thing appeared in the distance, raced over the horizon and was followed up 30 seconds or a minute later by a huge boom as the shock wave hit the ground. I can imagine that would be very frightening.”

#4 UPDATE: It is possible that it might have been a meteorite, instead of a meteor, as this picture and the video from the first update suggest: 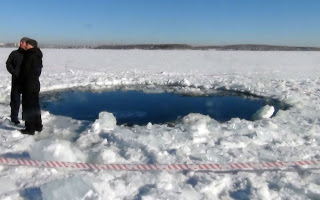 The hole in the picture is apparently made by on of the meteorites. Location: Chebarkul Lake, Chelyabinsk, Russia
I am looking forward to an official press release, which will hopefully clarify speculations.

#5 UPDATE: The meteor explosion released as much energy as a nuclear blast, Nature magazine reports – a blast much larger than North Korea’s recent test:

“Infrasound data collected by a network designed to watch for nuclear weapons testing suggests that today’s blast released hundreds of kilotonnes of energy. That would make it far more powerful than the nuclear weapon tested by North Korea just days ago and the largest rock crashing on the planet since a meteor broke up over Siberia’s Tunguska river in 1908.”

#6 UPDATE: The meteor that appeared over Russia this morning described a vector perpendicular to that of the asteroid flying by Earth later today. The Telegraph has an elegant graphic illustrating the paths of the meteor and the asteroid. According to their sources, the two events are not related. 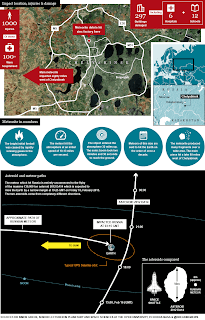