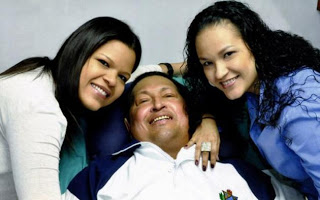 The Venezuelan President, Hugo Chavez, died Tuesday at the age of 58, after he was recently hospitalized with a severe respiratory infection.

The main stream media unanimously reported his death as a direct consequence of his cancer affliction, which may not be the case, according to Vice President Nicolas Maduro.


Mr. Maduro accused “foreign countries” (which is an indirect accusation to the USA) of poisoning the president. Maduro also warned that the United States was seeking to destabilize the country.
The government expelled the two American military attachés soon after the President’s death, accusing one of caring out “a plot against the government” after failed attempts to recruit Venezuelan military personnel to carry out “destabilizing projects.”

President Chavez accused multiple times the CIA of assassination attempts and failed coups against his regime, and there is solid evidence linking the Bush administration to the failed military coup of April 2002. — Read Article Here.

Why are the United States showing so much interest in Venezuela?
The United States are extremely dependent on the imported oil, and because most – if not all – of the decision makers have big investments in oil, they have no interest in finding and implementing clean alternatives.

As a result, many young Americans lost their lives fighting in the Middle East, in order to protect the financial investments of the 1% elite, by keeping the United States dependent to foreign oil. — Read more about the Bush-Laden-CIA Connections and their involvement in starting the war in Iraq.

Venezuela has the largest oil reserve in the world


According to Wikipedia, “the proven oil reserves in Venezuela are claimed to be the largest in the world, according to an announcement in early 2011 by President Hugo Chavez and the Venezuelan government. The reported proven reserves reach 297 billion barrels (4.72×1010 m3), surpassing that of the previous long-term world leader, Saudi Arabia. OPEC said that Saudi Arabia’s reserves stood at 265 billion barrels (4.21×1010 m3) in 2009.”
According to The World Factbook (also known as The CIA Factbook — because it is prepared by the CIA for the use of U.S. government officials), Venezuela also has the second largest natural gas proven reserves in the Western Hemisphere.

So, should we expect another war? In my opinion no, for two reasons: the first and most important one, Venezuela is strongly supported by Russia, and secondly, coups are much more rewarding than wars.

The illusion of a democratic government is preferred by those who control the country (and all of its wealth) from the shadows, because the people will never be able to point them out as the cause of their poverty. Instead, they will focus all of their attention on the puppet president (who was covertly manipulated into power by the shadow government, hence serving their interests), which they will replace with another puppet (who will serve the same people and interests as the previous one).

What will happen next in Venezuela?

Vice President Nicolas Maduro will serve as interim until the government will be ready to hold elections, in 30 days. According to Al Jazeera, Foreign Minister Elias Jaua affirmed one of Chavez’s final wishes:

“Maduro would be interim president and then be the ruling party’s candidate to carry on the larger-than-life leftist’s ‘revolution’ in elections to be called within 30 days.”

The future of Venezuela will be decided withing 30 days. Maduro’s main opponent will be the pro-USA candidate Henrique Capriles Radonski, which serves Washington and all its interests. While Maduro is seen by the common people as the logical successor to “El Comandante” Chavez, Capriles has the support (and access to the black budgets) of the CIA.

One thing is clear: it will be a fierce battle for the presidential seat.