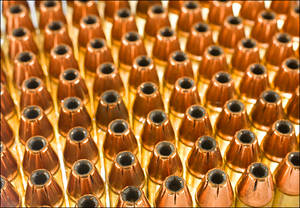 Internment camps for political dissidents in the U.S. aren’t a conspiracy theory. The Department of Defense document entitled “INTERNMENT AND RESETTLEMENT OPERATIONS” or FM 3-39.40 proves this beyond a shadow of a doubt. Download document here.

Foster Gamble (Thrive Movement) addresses an article published by Forbes, about the recent purchase of 1.8 billion rounds of ammo by the DHS:

As reported, the Department of Homeland Security (DHS) has an open purchase order for 1.6 billion rounds of ammunition, some for hollow-point rounds (forbidden by international law in war), and a large amount for specialized snipers. This would be enough to sustain a war in America for more than 20 years…less than 6 million rounds a month were used at the height of the Iraq war.
So, first there is the critical question:

‘Why in the world would the US domestic security force need enough bullets to wage an Iraq-style war for 20 years?’ ” (…)

“Let’s look through the lens of an Agenda for Global Domination, as described in the documentary film, THRIVE, that includes the demise of America. If you were planning the collapse of the economy, trying to institute a global authority and preparing to handle historic blowback, you might want to:

Authorize the use of the military against US citizens
✓ Cancel Posse Comitatus, Executive orders

And you would want to:

Take away as many guns as possible from those who might object to the globalist plan — especially the automatic weapons that would be a match for the soldiers imposing martial law and rounding up protesters.

Stockpile lots and lots of bullets — to use against those of us resisting and to deplete the market for those citizens wanting to purchase ammunition.

So when you try on this perspective… (just do a browser search for any items with which you aren’t familiar) does the fact that everything on this list has already been done seem like mere coincidence? Does it seem like it is all to protect us from foreign “terrorists” who hate our freedom? Or does it start to seem obvious that Henry Kissinger was serious when he said publicly,

‘Today, America would be outraged if U.N. troops entered Los Angeles to restore order. Tomorrow they will be grateful! This is especially true if they were told that there were an outside threat from beyond, whether real or promulgated, that threatened our very existence. It is then that all peoples of the world will plead to deliver them from this evil. The one thing every man fears is the unknown. When presented with this scenario, individual rights will be willingly relinquished for the guarantee of their well-being granted to them by the World Government.’

Most of the “Global Domination Agenda (GDA) list” above (from Railway cars with shackles to Drones authorized for use over US communities) has actually now been covered to varying extents by the mainstream media — usually 6–12 months behind the alternative sources.

So what to do?

Wake up. Speak up. Link up. Stand up. — Read complete article.

Reading on Facebook about this matter, I was surprise in a pleasant way to see that some people have already taken action:

Bob Hinz: “I called NY senator Schumer’s office and asked the aid if the Senator could explain this. The aid said that someone in his office would get back to me by phone or letter. She took my info. I also called Senator Gillebrand’s office and asked the same question and got transferred, and was disconnected a short time after that. I called back two times and was disconnected both times. I think we need to let our “representatives” know that we know what is going on and that we are not going to stand for it. It’s time to turn the heat up on those in government (and the invisible government behind them) who are there ostensibly to protect our rights and interests and not sanction efforts designed to control or murder the American people.”

Foster Gamble replayed with words of praise, as expected, and suggested that we all take non-violent actions: “Thanks for taking action, Bob. This can be happening all over the country! You are an inspiration. Keep the non-violent heat on! The sword of truth cuts to the heart of the matter without drawing blood.”

In my opinion, we haven’t learned anything useful from history. It’s depressing to see the crushing majority of people not interested in the future of the human species. With the Senate 93-7 ‘Indefinite Detention’ Bill passed and FEMA Camps officially activated, after priory receiving $1 billion for coffins and body bags from the US Government, we are definitely heading for something big.

Creating Drinking Water Out Of Thin Air Previous post
Russian Leader Warns: “Get All Money Out Of Western Banks Now!” Next post