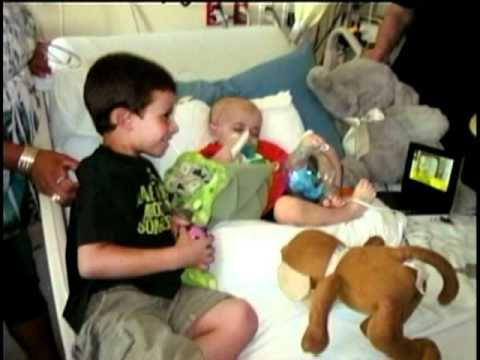 Medical marijuana is gaining acceptance, but could it even help kids? Dr. William Courtney has seen it happen, and on Friday, told HuffPost Live host Alyona Minkovski about it. Saying he was “quite a skeptic 5 or 6 years ago”, Dr. Courtney continued that “my youngest patient is 8 months old, and had a very massive centrally located inoperable brain tumor.” The child’s father pushed for non-traditional treatment utilizing cannabis.

“They were putting cannabinoid oil on the baby’s pacifier twice a day, increasing the dose… And within two months there was a dramatic reduction, enough that the pediatric oncologist allowed them to go ahead with not pursuing traditional therapy.”

The tumor was remarkably reduced after eight months of treatment. Dr. Courtney pointed out that the success of the cannabis approach means that “this child, because of that, is not going to have the long-term side effects that would come from a very high dose of chemotherapy or radiation… currently the child’s being called a miracle baby, and I would have to agree that this is the perfect response that we should be insisting is frontline therapy for all children before they launch off on all medications that have horrific long term side effects.” — Huffington Post

Recently, the Spanish International Medical Veritas Association (IMVA) and Dr. Robert Ramer and Dr. Burkhard Hinz of the University of Rostock in Germany, also aknowledged hemp oil as a cure for cancer. — Read article here.
UPDATE — Studying this case I’ve also stumbled across this 2008 case of a father who used Marijuana to heal his young boy of cancer:
Unfortunately, the child apparently deceased in the end. Here is a top YouTube comment:

“He actually passed away last year because the federal government in Montana took away marijuana dispensaries and he no longer had access to the cannabis oil that had his cancer in remission. THIS LITTLE BOY DIED BECAUSE OF THE GOVERNMENT GETTING IN THE WAY. I have been following this story since it was released and it absolutely breaks my heart to know that this little boy’s life was taken away by unjust laws and crooked politicians. Please thumbs up to let others know what the govt has done!”

The Prophecies of Mitar Tarabich: The Most Accurate Predictions Previous post
Hugo Chavez Died -- How Will USA React? Next post