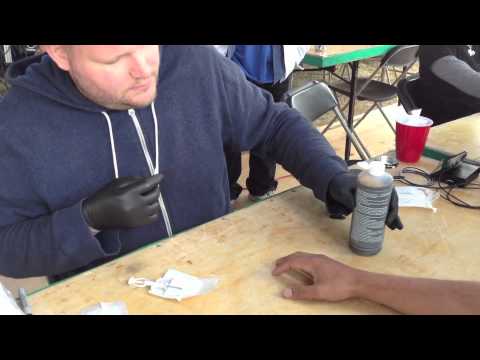 Eight sheeple payed $30 each, to have a RFID chip (model EM4012) implanted into their right hands. As you probably know by now, the end goal of the New World Order is to implant microchips in all of the Earth’s population, hence having total control over our lives. The microchip will be used as ID, credit card (under one global electronic currency), GPS tracker, and probably much more.

Personally, I’m sure that the ultimate version of the RFID microchip will be able to influence our moods and thoughts with the use of advanced nanotechnology, and even cause death — all via satellite control.

Evidence that the RFID human microchip is 666, the biblical “mark of the beast”!

The RFID Microchips had already been injected by force in the Philippines. Also watch: the North American Union and the Amero.
An interesting story is that of Bob Boyce, the man who discovered the so called “infinite battery”. Unfortunately, Bob was diagnosed with terminal cancer. In the center of Bob’s tumor the surgeon found a microchip manufactured by a company called VeriChip. The doctors concluded that it was the cause of his cancer. Bob had no idea how the microchip got into his body. — Read his story and also learn how to build the “infinite battery”.
Russian Leader Warns: “Get All Money Out Of Western Banks Now!” Previous post
Groundbreaking New Physics Surrounding Pyramids Next post