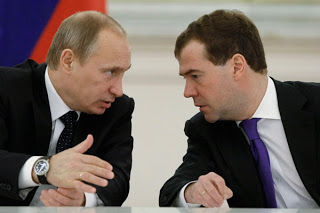 Russian Leader Warns: “Get All Money Out Of Western Banks Now!”

According to EU Times, “a Ministry of Foreign Affairs (MFA) ‘urgent bulletin’ being sent to Embassies around the world today is advising both Russian citizens and companies to begin divesting their assets from Western banking and financial institutions ‘immediately’ as Kremlin fears grow that both the European Union and United States are preparing for the largest theft of private wealth in modern history.

According to this ‘urgent bulletin’, this warning is being made at the behest of Prime Minister Medvedev who earlier today warned against the Western banking systems actions against EU Member Cyprus by stating:


‘All possible mistakes that could be made have been made by them, the measure that was proposed is of a confiscation nature, and unprecedented in its character.

I can’t compare it with anything but… decisions made by Soviet authorities… when they didn’t think much about the savings of their population. But we are living in the 21st century, under market economic conditions. Everybody has been insisting that ownership rights should be respected.’ “

At the time of this article, the total US national debt was $16,733,820,000,000+ and rapidly growing, as presented by the US debt clock. I say it again: there will be NO economic recovery! From the creation of the very first dollar until the complete collapse of the financial system, is just a matter of time. And this cycle will go on and on, for as long as the US government will continue to loan money from the Federal Reserve — which is a private bank, despite its official-sounding name.

Though there are no signs of an economic recovery, we see the government preparing for a total collapse:

2. The Precious Metal Restriction Has Begun;