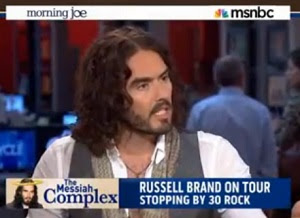 I had never heard of Russell Brand until recently, but he’s about to become a household name across America thanks to his delusion-busting performance as a guest on MSNBC’s Morning Joe program where he “ripped them all a new one” according to comments posted on YouTube.

Allow me to explain: MSNBC is a news show with a huge budget and almost no viewers. It is hosted by what can only be called a “band of retards” who have absolutely nothing useful to say… ever!

Today they made the mistake of inviting a guest on their show (Russell Brand) whose IQ exceeds the sum of all the other IQs of everybody else in the room. 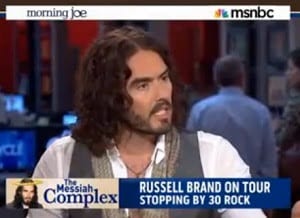 Watching this collision of one high-IQ individual with a band of “teevee tards” was a lot like watching Alex Jones and Piers Morgan… but funnier.

Brand proceeded to cleverly smash through their boring senseless chatter, take over the news reporting without using a teleprompter, profile the secret sexual fantasies of the female host, and mock them all without them even realizing they were being mocked.

“This is a hotbed of neurosis and psychosis… I’m grateful to be here,” Brand says to the other three hosts at one point, and they have zero reaction seemingly because they don’t understand the multi-syllabic words he’s using.

Brand even managed to explain to MSNBC’s viewers (most of whom probably had no ability to grasp what he was saying) how the mainstream media manipulates the words of people in order to construct a particular agenda. He said that mass media was an operation in changing information “so it suits a particular agenda” and that MSM viewers were being manipulated.

In response, all three MSNBC co-hosts could come up with nothing better than to talk about Brand’s chest hair, or his fashion boots, or claiming they couldn’t understand him because he was talking in a British dialect. It was almost exactly like watching the movie Idiocracy by Mike Judge, specifically the courtroom scene.

Brand, meanwhile, continued to pummel the hosts with one quip after another, slamming home insightful, even philosophical observations about how stupid the media is and what a bunch of stooges the MSNBC reporters were.


Russell Brand made these reporters look as dumbfounded and clueless as Alex Jones made Piers Morgan appear in their now-famous CNN encounter. It was one of the most refreshing things I’ve seen in recent memory. More! More!

Russell Brand is touring the USA and Canada right now, continuing through July and August. He’s in the UK later this year. Click here for show dates and locations. — Natural News;
Extremely Important Information: The Human Sponge Previous post
The Island Where a Dead US Soldier is Worshiped as God Next post