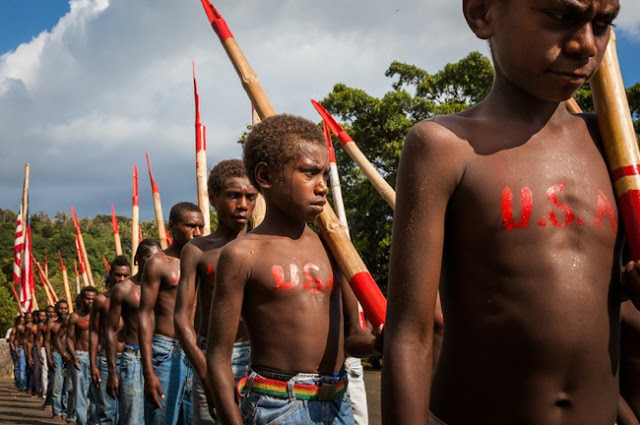 The Island Where a Dead US Soldier is Worshiped as God

I. The island where a dead US soldier and Prince Phillip are worshiped as gods

The tribe of Tanna (a remote island near Fiji and New Caledonia) worships a deceased American WWII soldier named John Frum as Messiah, while their supreme deity is none other than Prince Philip, Duke of Edinburgh.

Their religion fells into the category of what is known as “Cargo Cults“. They originated in early 20th century tribal communities on a number of Pacific islands.

He joined them during their annual festivities, where they all paint “USA” on their chests and march around with bamboo mock-up rifles and wooden AK-47s in the hope that John Frum will return and offer them abundance and salvation. But there is also an Apocalyptic scenario about their Messiah’s return.

According to their beliefs, everyone in the world will die at his return and they will inherit the planet and all its wealth.

“It all started in the early 20th century, when Westerners started going to Melanesian islands, like Papua New Guinea, Vanuatu, and the Solomon Islands. I mean, imagine seeing planes and boats for the very first time. To them, it was literally a miracle from the sky—foreign beings appearing in these huge, noisy things and bringing them rifles, clothes, and food.” — Vice;

These religions were born after US and UK soldiers reached their remote islands by ships and planes during WW2 (mostly), to establish airfields and army bases.

Without a proper understanding of our culture and technology, they considered the soldiers to be actual gods coming from the heavens.

So, what if our ancestors witnessed similar things thousands of years ago, and our religions are nothing else than the variations of these cargo cults?

Studying the ancient accounts of gods from the most important ancient cultures, like the Sumerian, first African tribes, Akkadian, Egyptian, Mesoamerican, Greek and even Roman, always led me to the discovery of flesh and bones beings, with names and kindred.

They had been worshiped as gods only after their departure, and the rituals of our ancestors had the goal of bringing them back.