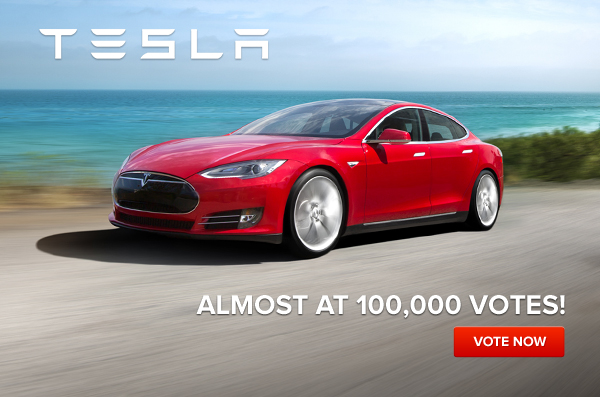 As you may know, Tesla is under attack from a number of car dealer associations in various states who are challenging Tesla’s right to directly serve our customers at Tesla Stores and Service Centers.

Their efforts are protectionist in nature and infringe on the right of the consumer to choose how they purchase and service their vehicle.

An anonymous Tesla enthusiast created a White House petition to allow direct sales of cars to consumers in all states. We want to thank the tens of thousands of fans who have voiced their support and have already signed the petition. We want this petition to succeed. For that to happen, the petition needs 15,000 more signatures by Friday, July 5, 2013.

Please act now and take a moment to register, sign and forward the petition today!

A victory for Tesla against the car dealer associations will allow Tesla to sell cars directly to the US population, which translates into cheaper cars for the consumers. Why should we be forced to pay additional fees to car dealers?
If Tesla wins, then other car manufacturers will probably follow their example and demand the right to sell products directly to the consumers. Fingers crossed!
Pole Shift News -- When Will It Happen? Previous post
US And Russian Astronauts Talk About Their UFO Experiences Next post