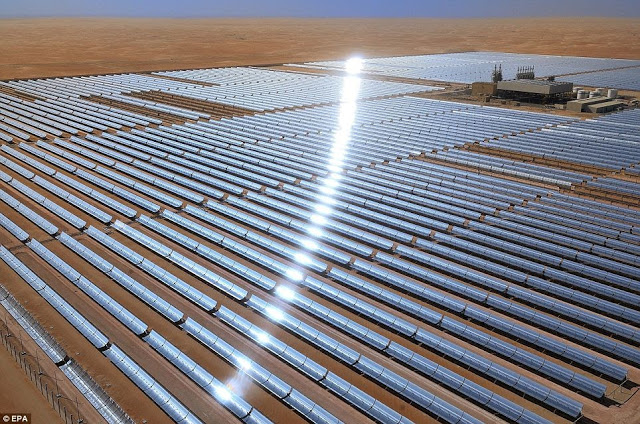 – 100-megawatt plant will power thousands United Arab Emirates homes;
– It is hoped that it will also displace 175,000 tons of CO2 each year;
– Plant covers 2.5 sq/km of desert, equivalent to 285 football pitches;

You might think that as one of the world’s top oil producing nations, the United Arab Emirates would have little use for solar energy. But that hasn’t stopped the Middle East state from unveiling the largest concentrated solar power plant in operation anywhere in the world.


The 100-megawatt solar-thermal project in Abu Dhabi will power thousands of homes in the country and, it is hoped, displace approximately 175,000 tons of CO2 per year. The $600 million (£398 million) project dubbed Shams 1 took three years to build.

Incorporating the latest in parabolic trough technology, the plant features more than 258,000 mirrors mounted on 768 tracking parabolic trough collectors, covering an area of 2.5 sq/km, or 285 football fields. By concentrating heat from direct sunlight onto oil-filled pipes, Shams 1 produces steam, which drives a turbine to generate electricity.

In addition, the solar project uses a booster to heat steam as it enters the turbine to dramatically increase the cycle’s efficiency. The project also includes a dry-cooling system that significantly reduces water consumption – a critical advantage in the arid desert of western Abu Dhabi.

In the sweltering heat of the Arabian sun, Shams 1 generates electricity to power 20,000 homes in the UAE.

And because solar power is generated during peak demand the UAE is able to reduce the need for ‘peak shaving’ generators, which are expensive and idle most of the year. Masdar, Abu Dhabi’s renewable energy company, partnered with French energy company Total and Spain’s energy infrastructure company Abengoa to build the plant.

‘The abundance of solar energy is an opportunity to integrate sustainable, clean sources of power that address energy security and climate change.

‘The region needs more projects like Shams 1, and we look forward to pushing the boundaries of future energy.’

Dr Sultan Ahmed Al Jaber, CEO of Masdar, said: ‘The inauguration of Shams 1 is a major breakthrough for renewable energy in the Middle East.

‘Just like the rest of the word, the region is faced with meeting its rising demand for energy, while also working to reduce its carbon footprint.

‘Shams 1 is a significant milestone, as large-scale renewable energy is proving it can deliver electricity that is sustainable, affordable and secure.’

He added: ‘Abu Dhabi is investing and incubating a new energy industry, domestically and internationally. Through Masdar, the UAE is redefining the role it plays in providing the world with energy.

‘From precious hydrocarbon exports to sophisticated renewable energy systems, we are balancing the energy mix and diversifying our economy – moving toward a more sustainable future.

‘Today, the UAE is the only OPEC nation delivering both hydrocarbons and renewable energy to the international market.’