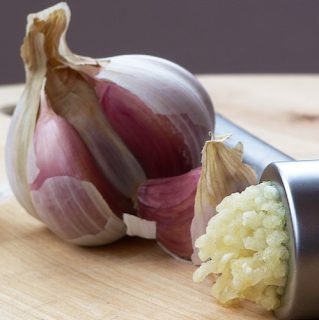 That’s a statistic the cancer industry cannot claim because almost 40% of cancer patients die within five years and more than 80% die within twelve years either of the cancer or the treatment that was administered for the cancer.

Eating garlic twice a week will never kill you and it reduces cancer risk without any side effects whatsoever.

The reason so many people die with conventional cancer treatment is that while damaging healthy cells, chemotherapy also triggers them to secrete a protein that sustains tumour growth and resistance to further treatment.

Only through the forces that have carefully conspired to thwart meaningful advances in cancer research and treatment over the past century has chemotherapy succeeded. In what reality do we live in when cut, poison and burn are the only ways acceptable to treat cancer?

The Power of Garlic

Garlic (Allium sativum) is a member of the onion family Alliaceae. Garlic has been used throughout history for both its culinary and medicinal properties.

Garlic’s distinctive characteristics arise from sulfur, which constitutes almost 1% of its dry weight.

Although garlic does not typically serve as a major source of essential nutrients, it may contribute to several dietary factors with potential health benefits, including the presence of oligosaccharides, arginine-rich proteins and, depending on soil and growing conditions, selenium and flavonoids.

Preclinical models provide rather compelling evidence that garlic and its associated components can lower the incidence of breast, colon, skin, uterine, esophagus, and lung cancers. Suppression of nitrosamine formation continues to surface as one of the most likely mechanisms by which garlic retards cancer.

The ability of garlic to inhibit tumors due to different cancer-inducing agents and in different tissues indicates that a generalized cellular event is likely responsible for the change in tumor incidence and that the response is highly dependent on environmental or other types of biological insults. Because metabolic activation is required for many of these carcinogens, there is likelihood that either phase I or II enzymes are altered.

It is becoming increasingly clear that the response to allyl sulfurs relates to their ability to form free radicals rather than to serve as an antioxidant (Antosiewicz et al. 2008). Allyl sulfurs may bring about changes by influencing the genomic expression by affecting histone homeostasis.

Garlic has even been found to be 100 Times More Effective Than Antibiotics.

Researchers at the Jiangsu Provincial Centre for Disease Control and Prevention claim to have found a protective association between the intake of raw garlic and lung cancer, advocating that, “garlic may potentially serve as a chemopreventive agent for lung cancer.”

The study, published online in the journal Cancer Prevention Research, notes that Chinese medicine has used garlic since 2000 BCE. The authors suggest compounds such as diallyl sulfide – that are released when a garlic bulb breaks into cloves – may contribute to the herb’s potential preventative powers. The researchers did not look at cooked garlic in this study.

A number of studies on garlic have appeared dealing with diallyl sulfide and cancer. One from the Republic of Korea cites diallyl disulfide (DADS) as the most prevalent oil-soluble sulfur compound in garlic, inhibiting cell proliferation in many cell lines. Scientists there examined DADS ability to kill cells in a process involving free radical production.

They found that the famous tumor suppressor gene, p53, arrested the cell cycle when DADS treatment was present. Cancer cells died following 24 hour DADS treatment that activated the p53 gene. They also found that DADS induced cell death was prevented by treatment with a compound known to prevent p53 dependent cell death by reducing free radical levels in the mitochrondria, the cellular furnaces.

Their results showed that mitochrondrial free radicals may serve as second messengers in DADS-induced cell death, which requires activation of p53. That study was found in the January Journal of Biochemical and Molecular Toxicology.

When scientists looked at 4,500 adults in perfect health and 1,424 adults with lung cancer, they discovered that those who ate raw garlic at least twice weekly had a significantly lower chance of contracting lung cancer. Scientists worked it out to be a 44% less likely chance. Findings were similar even if the adults smoked or were near cooking fumes, with a 30% less likely chance.

The researchers conducted face-to-face, standardised interviews in China with 1,424 lung cancer patients and 4,543 healthy controls which aimed to find out about participants’ lifestyles and diets – in particular how much garlic they ate and whether they smoked.
According to the researchers the “effective components in garlic in lung cancer chemoprevention warrant further in-depth investigation.”

The researchers suggested that diallyl sulphide – a compound released when a garlic bulb sprouts into cloves – may be at the root of garlic’s preventative potential.

Diallyl sulphide is a breakdown of allicin, an antibiotic and anti-fungal compound largely depleted by cooking or pickling.

While the study concentrated primarily on garlic in its raw state, it can also be consumed in tablet, oil, powder, aged and cooked form.

Yet proclamations of these health properties can be found outside of China too. The World Health Organisation’s guidelines recommend a dose of around one clove of fresh garlic for adults per day. While garlic tablets are a licensed drug in Germany, where they are prescribed for the treatment of atherosclerosis.

Most of us buy garlic at a supermarket. We don’t know what kind it is, how fresh it is or where it’s grown. But there’s a good chance it comes from China, which produces 75 percent of the world’s supply — and whose food exports have come under scrutiny after recent discoveries of tainted pet food ingredients, toothpaste and more.

Garlic is the United States’ biggest fresh-vegetable import from China, which sent 138 million pounds of it worth more than $70 million last year. The U.S. also gets small amounts from Mexico, Argentina and about 15 other countries.

My advice is to buy garlic locally if you can and avoid Chinese garlic whenever possible.