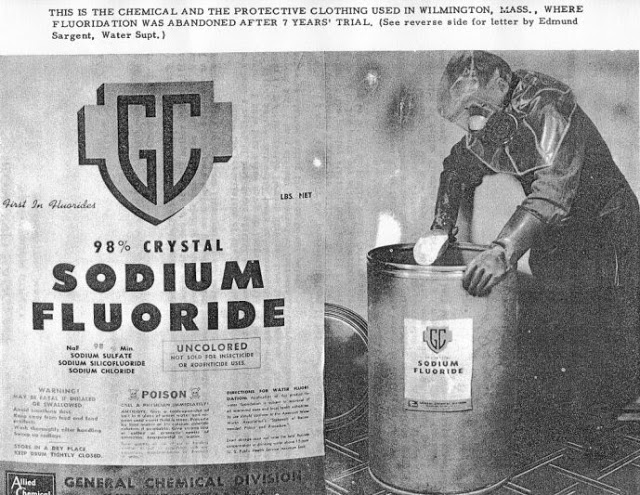 I was surprised to read this headline in the Register Guard on August 19, 1993: “Fluoridated Water Safe, Study Finds.” This proclamation came after an 18-month review of research on fluoridation by the National Research Council. On August 14 the NRC panel said that they found no credible evidence that fluoride causes cancer, kidney disease or birth defects.

Dr. Bernard Wagner, a NYU School of Medicine professor and chairman of the NRC committee, said that the only proven harm to health from fluoridelaced drinking water that his panel could find was an increase in staining or pitting of tooth enamel (dental fluorosis).

He said, “The overwhelming benefits of fluoride in water in terms of preventing (tooth decay), allowing young children to have a life of good teeth and maintaining those teeth into older life, far outweighs the small percentage of our population that shows fluorosis.”

The NRC committee viewed the EPA standard of no more than 4 parts per million (ppm) of fluoride in drinking water as “appropriate.” It is doubtful that the NRC committee reviewed 50 years of research by many scientists such as Yiamouyiannis, Waldbott and others that document the extreme toxicity of fluoride at doses far below the so-called “appropriate” level of 4 ppm.

The fluoridation of drinking water in America began in the 1940’s. The NRC panel estimates that 132 million Americans now use drinking water with fluoride levels above 0.7 ppm, the so-called minimum “beneficial” level. It is estimated that 184,000 Americans are drinking water that contains more than 4 ppm fluoride (Griffiths).

The NRC committee admitted that it cannot gauge the true fluoride exposure in Americans because it is present in foods, beverages and a wide array of dental products and procedures and because everyone consumes different amounts of fluoridated water and foods.

Estimates suggested that less than one-quarter of fluoride ingested by Americans comes from fluoridated drinking water.

The rest comes from canned foods, drinks processed with fluoridated water, medicines, insecticides, fertilizers, solvents, fuels, and so on. Fluoride is increasing in our food chain, our atmosphere and in our living tissues due to industrial contamination. In 1950, the average American ingested about 1.1 mg of fluoride daily. In 1988, this increased to 6 mg daily. If fluoride prevents tooth decay, and we’re ingesting more than ever before why are dental cavities increasing?

The following information is from the research of Dr. John Yiamouyiannis, unless otherwise documented. Yiamouyiannis has spent years researching the health effects of fluoride toxicity. He founded the Safe Water Foundation, which regularly reports research documenting the harmful effects of fluoride. Fluoride is a cumulative poison that damages the immune system, poisons over 100 enzymes, makes minerals such as calcium and magnesium precipitate and become unavailable, causes premature aging, causes hypothyroidism, increases risk to cancer and bone pathologies such as osteoporosis, and causes seizures in susceptible people. Fluoride also increases the risk for the so-called autoimmune diseases, such as Lupus, Rheumatoid Arthritis, and others, and increases the incidence of mongoloidism and crib death (SIDS) in newborns.

NO! In May 1989, Yiamouyiannis and his researchers reported the results of their analysis of a large database from the National Institute of Dental Research (NIDR) of the US Public Health Service to determine whether there is a relationship between fluoridation and tooth decay. Released on June 21, 1988, the $22,670,000 nationwide survey examined 39,207 U.S. school children aged 5 – 17 years from 84 geographical areas.

Other researchers confirmed Yiamouyiannis’ research. For example, A.S. Gray and J. Colguhoun were public health officials who had previously been very active in promoting fluoridation. Both authors showed that tooth decay in fluoridated areas was the same or slightly higher than in nonfluoridated areas. Colguhoun’s research has documented many flaws in earlier studies claiming that fluoridation reduces tooth decay. Fluorosis (dental mottling of teeth) occurs in one out of four children.

Why is Fluoride Called “The Aging Factor”?

Yiamouyiannis’ book, Fluoride, The Aging Factor, documents the cumulative effect of tissue damage by fluoride, commonly seen as aging (collagen damage), skin rashes and acne, gastrointestinal disorders, and many other conditions, including osteoporosis. The U.S. Center for Disease Control and the Safe Water Foundation reported that 30,000 to 50,000 excess deaths occur in the United States each year in areas in which the water contains only one ppm fluoride.

The following is a partial list of conditions that show why fluoride is called the aging factor. Fluoride destroys collagen: Fluoride breaks down collagen and interferes with its formation. Collagen comprises 30% of the body’s protein and is a major structural component of skin, ligaments, tendons, muscles, cartilage, bones and teeth. In lab tests, fluoride was fed to animals. Collagen breakdown products – the amino acids hyroxyprolene and hydroxylysine – were observed in their urine. These amino acids are found only in collagen and their levels start increasing in the urine at only one ppm fluoride. (Yiamouyiannis, Health Freedom News).

Fluoride’s destruction of collagen causes premature wrinkles, brittle bones and teeth as well as arthritic symptoms. In fact, fluoride increases the brittleness of bone so much that it shatters like glass when stressed, as in an accident. Yiamouyiannis describes severe health problems among a group of Turkish villagers in Kizilcaoern, who drank water containing 5 ppm fluoride. Their symptoms were quite dramatic because the villagers had a poor, low protein diet. Symptoms included premature aging, bone problems including arthritis, frequent fractures, and a poor birth rate, with stillbirths after 4 or 5 months of gestation.

Fluoride suppresses the immune system: Fluoride inhibits the movement of white blood cells by 70%, thereby decreasing their ability to reach their target. Yiamouyiannis cites 15 references in his pamphlet, Lifesavers Guide to Fluoridation, that document immunosuppressive effects of as little as 10% of the amount of fluoride used in fluoridated water. These include studies in Japan (1985), Russia (1987) and Scotland. Immunosuppressive effects run the gamut, from a cold that won’t go away to increased risk of cancer and other infectious diseases.

Fluoride is a potent enzyme poison: The U.S. Academy of Sciences, the World Health Organization and others have listed over 100 enzymes that are inhibited by fluoride at levels of 0.1 to 2 ppm. For every enzyme inhibited, an important metabolic process is stopped. For example, fluoride accumulating in the thyroid is one of several factors in the current epidemic of hypothyroidism. In fact, the symptoms of fluoride poison are identical to those of hypothyroidism.

Does Fluoride Cause or Increase the Incidence of Cancer?

YES! Yiamouyiannis documents research showing that fluoride increases the tumor growth rate by 25% at only 1 ppm, produces melanotic tumors, transforms normal cells into cancer cells and increases the carcinogenesis of other chemicals. For the original references to these studies, refer to Yiamouyiannis’ pamphlet, Lifesavers Guide to Fluoridation.

In 1977, epidemiological studies by Dr. Dean Burk, former head of the Cytochemistry Section at the National Cancer Institute and Yiamouyiannis showed that fluoridation caused 10,000 excess cancer deaths yearly. It was not until 1989 that the results were reluctantly released.

Is it Okay for Pregnant Women to Ingest Fluoride?

NO! Fluoride readily crosses the placental barrier into fetal circulation. As the fetal skeleton develops and calcifies, it affords binding sites for fluoride. Fluoride crosses all cell membranes and is toxic to all embryonic cells. For this reason, the FDA has banned fluoride in prenatal vitamins. Breast milk is stabilized at 0.1 to 0.14 mg/l of fluoride regardless of the mother’s intake, but this does not mean that the baby is safe from the effects of fluoride. Why? Fluoride decreases the available magnesium and calcium.

Can Fluoride Cause Seizures?


YES! Either calcium or a magnesium disturbance can produce seizures. Fluoride decreases calcium by combining with it to form a very insoluble compound (calcium fluoride). This has been used as an antidote for acute fluoride poisoning. Suppose you don’t have acute poisoning but simply a continuous small dosage in your water supply? It has been found in man and animals that the parathyroid glands are extremely sensitive to fluoride. Continuous doses cause hyperparathyroidism, which further decreases calcium and upsets its delicate balance. This produces seizures. (Faccini, Teotia, Spira).

Is There a Safe Level of Fluoride?

NO! The best you can do is to make sure your water has less than 0.2 ppm (parts per million) fluoride. The U.S. Pharmacopeia says that one or two ppm of fluoridated water can cause varying degrees of pain, bone aching, weakness, brown teeth, stiffness and loss of appetite. These are the same symptoms suffered by the Turkish village people described in Yiamouyiannis’ book.

Water is not the only source of fluoride. All commercial foods contain various amounts of fluoride from fluoridated water and fluoridated pesticides. To find the actual amounts which vary from 0.1 to 440 mg/kg, there are charts available at (link no longer available).

Can Fluoride Be Eliminated from The Body?

YES! At least from soft tissues. For example, drinking distilled water for 3-6 months reduces the soft tissue fluoride levels but not bone levels. Soft tissue levels cause the greatest health problems. Case history (Waldbott): A 12-year-old boy who lived in a town where the water supply was fluoridated developed convulsions of increasing severity. The neurosurgeon did many tests, and exploratory brain surgery but found nothing diagnostic. When fluoridated water was eliminated, the child had no further attacks and urinary fluoride levels decreased from extraordinarily high amounts (4.4 mg per 24-hours) to none.

How To Prepare For An Economic Depression Previous post
Marine Corps Colonel Speaks Out: "We're Building A Domestic Army" Next post