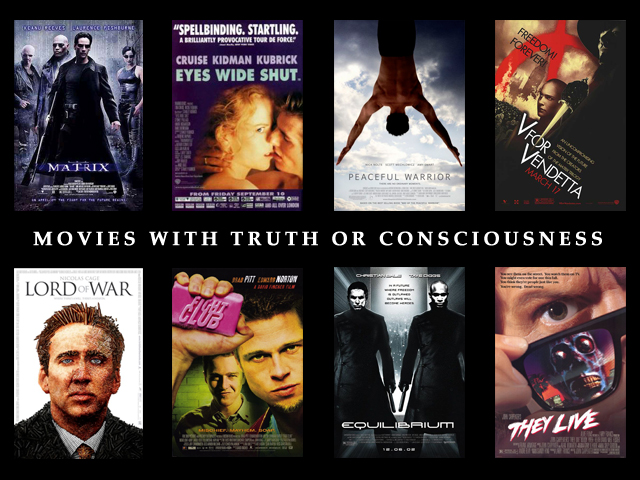 Peaceful Warrior
Gives a great look at the importance of living in the now, and sheds light on the role that the mind can play in clouding your inner guidance. Shows the limitless potential we all carry, while emphasizing that there is more to life than just what we have and what we chase in the form of materials and success. Based on the true story of Dan Millman.

The Matrix
Gives a great representation of exactly what we are to the Elite of the world –batteries. We fuel their entire matrix and designed system. Perhaps even more profound is how this film reveals what it is like to awaken and step out of The Matrix into the real world. Only the minds stories and your ego are what limit you. 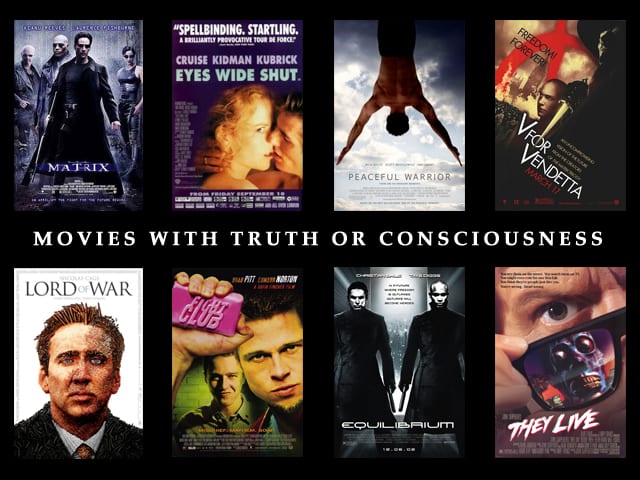 Equilibrium
What would happen if your government created a medication that stopped you from feeling? This is what is explored in this film and it eerily is accurate to our world and how we have become drones to the system simply going to work and doing tasks not ever feeling what is outside of it. What happens when one breaks free?

They Live
A very accurate depiction of the Extraterrestrial presence that is ruling our planet. They Live sheds light on how a secret group of reptilian ET’s are at the top of our elite and are creating a frequency on the planet that keeps us all blind from the truth and from seeing who they truly are. It also sheds light on much of the control the Elite has over various structures.

V For Vendetta
Shows some of the corruption in the various levels of government, and how we are kept hidden from the truth. Ultimately also gives glimpses of the intention behind the New World Order, and how all it takes is a collective awakening and refusal to abide to bring an end to their power and control.

Eyes Wide Shut
A look into what Illuminati and masonic rituals are like. This film was modeled after real events. Kubrick’s goal in this film was to expose what was happening with the Elite in this world. Kubrick was apparently killed for the release of this film shortly after approving the final cut that was released in theaters.

La Belle Vert (The Green Beautiful)
Shows the interconnectedness we all share, and how far off the human experience on earth has drifted from that. Focuses on the simplicity and peace that inherently comes from a planet based on love and oneness.

Fight Club
At the end it shows how the complete collapse of the financial and debt structures in place. Which is part of what will be required to shift the consciousness of the planet.  Also shows the role the mind can play, and how easily it can mask itself as our true and only experience.

Revolver
An awesome movie with a lot of truth in it that is often not seen in film. This movie breaks down what the Ego truly is and how it plays a role in enslaving us. It very accurately depicts the role of the ego and how powerful it can be in this experience. All of this is done with a great story anyone would enjoy.

1984
Shows the government’s ability and desire to easily re-write history and ultimately control everything that we say, think and feel. Also uses a reversal of freedom and love-based words to enforce a heavily controlled reality, where power rests in the hands of few. Also shows how fear alone is enough to keep people not only supporting but in promotion of the system that keeps them enslaved.

Conversations With God
Shows the relationship and connectedness we all have with our inner guidance/ higher self. Also gives a framework for how life naturally falls into place when connected, and how the mind can play a definitive role in disconnecting us from it.

Metropolis
Shows the enslavement of the masses for the benefit of the few, and the desired separation that exists between the two classes. So much so that the enslaved have no understanding of what they are up keeping, and the benefactors have no appreciation or connectedness to those that they benefit from.

Blood Diamond
Sheds light on the corruption and hardship incurred in certain parts of the world to provide unnecessary luxuries to those in the developed world.  Also shows how this truth is controlled and hidden from those who keep the industry intact through praise and value.

Avatar
A film involving consciousness and how we are all connected as one to each other,  the planet and the animal kingdom. Avatar also has a striking resemblance to the actual reptilian take over of earth. In the films case humans create a hybrid body to mingle and manipulate the Na’vi race much like what has happened here on earth.

The Wizard of Oz
Shows one of the control systems most heavily utilized tactics, which is to blow their control and power out of proportion. Making them seem larger and more powerful then they truly are (the small wizard behind the curtain).

K-Pax
This is a story of a “drop in” which is an Extraterrestrial who takes on a human physicality to have an experience on earth. Prote, the main character, has come from his planet and into a human body to observe and take back information about the experience of earth.

Fire In The Sky
This film is based on a true story of an alien abduction. Not much more needs to be said other than, it’s a true story and many cases like this exist.

Mr. Destiny
A comedic and light-hearted film that introduces the idea of timelines, ultimately showing that as unpleasant as one’s current reality may seem, it is always that which is best for soul growth and experience.

A Scanner Darkly
Featuring some cameo appearances by Alex Jones, this film dives into the drug world and how the government and the very people appointed to stop drug use and sales get caught up in the scene and are often the suppliers.

Knowing
This film has some great bits of truth in it that involve ETs and light beings who are choosing to assist various individuals in an apocalyptic time with rebuilding a new life on another planet. This was a potential scenario that had dissolved in reality.

Ambition to Meaning
This is a film made by Dr. Wayne Dyer and is based on some of his books. It is a great depiction of 3 different stories that all intertwine with one another. This film is geared towards spreading the message of shifting ones consciousness to create a new and more expanded life.

What Dreams May Come
Sheds light on the fact that we can sometimes create what appears as a periodic afterlife for ourselves based on what we believed while living. We remain in this afterlife until we figure our how to move beyond it and reincarnate again.

Waking Life
Are dreams as real as reality? The film looks at dreams and how they can be as real and full of growth as “real life” is.  This is a good one to reflect upon as it allows us to raise many questions within ourselves about life, the universe and how it all ties together.