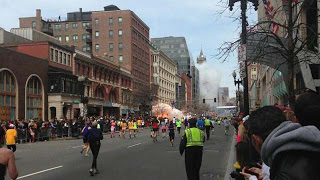 Almost five months passed since the Boston Marathon bombings took place, and there are many questions left unanswered. Even though I could write a very long list of important questions, I have decided to select only the most crucial ones.

1. Why was there a bomb drill scheduled for the exact same day as the Boston Marathon?

2. After the first explosion, why did the officials announced on the speakers that it was just a drill?

University of Mobile’s Cross Country Coach, who was near the finish line of the Boston Marathon when a series of explosions went off, said he thought it was odd there were bomb sniffing dogs at the start and finish lines.

“They kept making announcements on the loud speaker that it was just a drill and there was nothing to worry about,” Coach Ali Stevenson told Local 15.


“It seemed like there was some sort of threat, but they kept telling us it was just a drill.” [1]

3. Zubeidat Tsarnaeva, the mother of the two suspects, told RT News that the FBI was “controlling” her sons for up to five years. [2] So why had the FBI denied any previous contact with the suspects, only to later admit that they were in contact for about five years (just like their mother said)?

4. Why is the main stream media not mentioning the fact that the FBI openly admitted to have previously fabricated phony terrorists and terror attacks?

5. Why do the officials ignore the clear differences between the backpacks worn by the Tsarnaev brothers and the ones found at the bomb sites? The colors and models clearly don’t match up, but they do match with the backpacks worn by the CRAFT members, who were also deployed at the bomb site number one (color, shape, braces and even the white label). 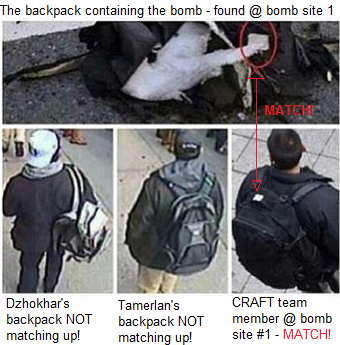 6. Why have the officials never questioned  – actually, not even mentioned – the CRAFT black-op teams standing all around the bomb site number one?

After all, they were the ones who carried identical (or almost identical) backpacks to the ones found torn apart at the bomb sites.

On the same note, here is a very disturbing picture, of a bearded man standing at the location where the first bomb was allegedly detonated.

His backpack seems identical to the ones worn by the CRAFT team and to the one found torn apart at the bomb site number one. Also, he is not paying any attention to the marathon. He was never mentioned or questioned by the officials.

7. Why was he never even considered a suspect?

8. What were the ones presented to us as “the first responders” to Sandy Hook, doing under cover near the place of the first explosion? [4] – Could they be actors?

9. According to the official story, at the bomb site number one, the bomb exploded on the sidewalk, just in front of the “Lenscrafters” building. So why is there so much glass from their windows on the sidewalk, like in the case of an inside explosion (or a staged event)?

A Saudi national named Abdul Rahman Ali Alharbi – who has six relatives belonging to Al Qaeda and another five that were detained at Gitmo – was allegedly injured at the scene of the Boston Marathon Bombing. In the following picture you can see him and two other Saudis near the scene of the first explosion. 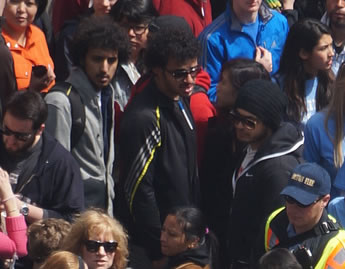 10. What is a man with a dozen Al-Qaeda relatives doing at the site of a terrorist attack in USA?

Immediately after the explosions, Alharbi was declared “a person of interest” by the FBI, but soon after Secretary of State John Kerry secretly met with the Saudi Foreign Minister, Alharbi was removed from the suspect’s list (in less than 24 hours) and promised to be deported on National Security as soon as possible.

11. How is it possible to rule out of the suspect’s list a person who was present at the bomb site and who is related to so many Al-Qaeda members, in less than 24 hours?

Even strangely, Alharbi was also visited in hospital by Michelle Obama. [5] Also the US president, Barack Obama, made room for an unscheduled meeting with the Saudi Foreign Minister.

12. Why was Alharbi visited my Michelle Obama in hospital?

13. Why did Barack Obama met with the Saudi Minister in such a hurry?

There is a video showing the arrest of Tamerlan Tsarnaev, [6] and his identity was confirmed by his aunt. [7] Tamerlan was took into custody naked and uninjured. Later, pictures of his dead and mutilated body surfaced on the internet.

14.  So, who killed Tamerlan Tsarnaev in police custody and why is the official story still standing after footage of his unharmed arrest?

Also, despite the official reports stating that Tamerlan was run over by his brother with a stolen SUV, Dr. Richard Wolfe, head of the hospital’s Emergency Department, could not see any evidence of this claim:

“I certainly did not see any tire marks or the usual things we see with someone run over by a car,” he said. [8]

15. Where is the video showing Dzhokhar Tsarnaev dropping his backpack at the place of the first explosion? FBI said they have it and promised to make it public – they haven’t.

16. Why hasn’t the police read the Miranda rights to Dzhokhar Tsarnaev? Every human being on this planet is INNOCENT until PROVED guilty by a COURT OF LAW.

17. Why are there no pictures of Dzhokhar Tsarnaev after his arrest, not even in courtroom?

For all we know at this point, he could be dead, and replaced in courtroom by a look-alike actor.

18. Why isn’t the press mentioning all the other cases in which official drills were being conducted by governmental institutions or companies affiliated to the government, at the same day and in the same way as actual terrorist attacks took place?

And finally, here is a “bonus” question pack:

What if the Tsarnaev brothers are not even dead? What if everything is just a bad movie that we are all watching on TV, thinking its real? What if they are all actors and the joke is, once more, on us?