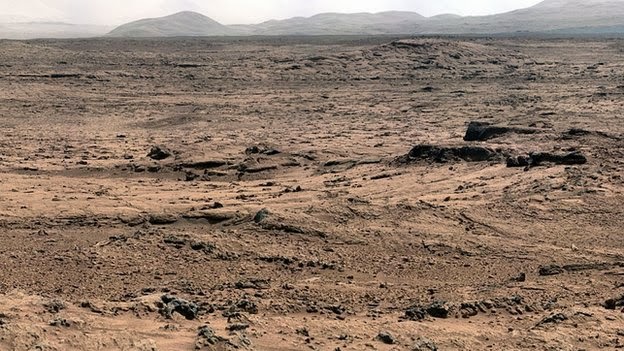 I’ve always had the feeling that there could be a strong connection between our planet and Mars. And the more I dug up on this subject, the more evident the connection became. In this article, I’ve puzzled together some of the latest scientific discoveries, so we can sneak a peek at one of the best-kept secrets of our solar system: (get ready for it) life on Earth may have originated on Mars.

I. NASA: “Rover Finds Conditions Once Suited for Ancient Life on Mars”

“Scientists identified sulfur, nitrogen, hydrogen, oxygen, phosphorus and carbon — some of the key chemical ingredients for life — in the powder Curiosity drilled out of a sedimentary rock near an ancient stream bed in Gale Crater on the Red Planet last month.”

After analyzing rock sample collected by the Curiosity rover, NASA concluded in March 2013 that Mars was once suited for life. According to Michael Meyer, lead scientist for NASA’s Mars Exploration Program at the agency’s headquarters in Washington:

“A fundamental question for this mission is whether Mars could have supported a habitable environment, (and) from what we know now, the answer is yes.” [1]

“One of the most exciting results from this very first solid sample ingested by Curiosity is the high percentage of water in the soil,” said Laurie Leshin, lead author of one paper and dean of the School Science at Rensselaer Polytechnic Institute.

“About 2 percent of the soil on the surface of Mars is made up of water, which is a great resource, and interesting scientifically,” Dean Leshin concluded. [2]

III. Are we all Martians?

During the last month’s Goldschmidt Meeting [3] held in Florence, Italy, Prof Steven Benner detailed the theory that life on Earth “may have come from Mars.”

“The evidence seems to be building that we are actually all Martians; that life started on Mars and came to Earth on a rock,” Prof Benner detailed. [4]

Have a wonderful day – possible – Martians! 🙂