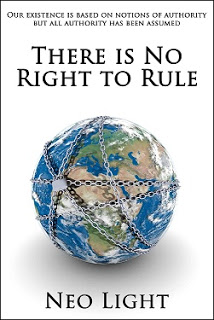 There is No Right to Rule!

Alexander LightSeptember 10, 2013
Neo Light: “Everybody knows this, right, because this is what everyone has been conditioned to believe to be true. But the majority of what most people believe to be true is what they have been conditioned to accept, through their parents, their peers but most significantly by the indoctrination which passes for state education and through the mass media.

But I can prove that much of what we believe to be true is not true; it’s just that we’ve all come to accept it because most people perceive it as reality.

But there is NO RIGHT to rule, this condition only exists because it was a system which was set up to control and dominate humanity, yet most people believe that this structure of those who rule and those who are ruled is a natural state for civilized society. But it is not a natural state for the human condition as humans are meant to be free: it was in every respect an artificial system that was instituted when ‘civilizations’ developed.

Do you know that there truly is no right to rule? All those who have exercised any right to rule have declared their assumed authority, yet we are told that their rule is either ‘divinely’ ordained or is in some other way legitimate. In this book I take people through the systems which have declared a right to rule, starting with the religions as they endorse and support the reign of monarchs. I highlight some of the key questions I posed and issues I identified which led me to recognize the inherent defects in the structures which have been instituted to govern our lives.

I give an overview of the legal system looking at the origin of law, who are the lawmakers and detail what the law in fact is, which is different to what people believethe law to be. The major revelation in the book is this: I can prove that everyone is the property of the state, no one is free and no one owns anything they think they own.

I evidence when this structure was devised and who were instrumental in creating a system where the human population were used as collateral to raise money from the financial markets and how this persists to this day.

It arose when slavery was purportedly abolished and the English parliament voted to compensate the slave owners to the sum of £20 million, equivalent to £15 billion today, and that a secret committee was convened to negotiate the terms of the loan from the banks.
How it was the most influential men in parliament who introduced the bill to register births and that it was the parliamentarians who were the slave owners and thus legislated for themselves to receive compensation for the loss of their ‘property.’ They had agreed to compensate themselves and used the future labor of the people as collateral to raise the funds. And these are the things that are never spoken of in the mainstream, the government were immoral and corrupt then and as you know still are to this day.

I go on to legally distinguish the difference between a ‘person’ and a ‘human being’ and how all laws refer to a person. What most people do not know is that a corporation is legally defined as an ‘artificial’ person and I evidence how everyone exists in society and contracts with the state in their capacity as an artificial person, the corporation. And I evidence why it is that people contract with the state through the all capitalized version of their name, though they have no idea this is what they do and explain the historic significance and real meaning of the all capitalized version of one’s name.
But equally as importantly I show people how to free themselves from contracting with the state as an artificial person and how to reclaim their independence and sovereignty, not least by including copy letters that I sent to the Registrar General for Births, Deaths and Marriages and to other state agencies informing them that I know the fraud that has been perpetuated by getting parents to pass legal title for their child to the state and that I no longer contract with them in the capacity as a corporation.
I also evidence how it is the christian church which has been instrumental in declaring some right to rule and how the church, the monarchy and the state are inextricably linked. How this nexus has existed since before the formation of the modern parliament, how it is a small elite class which has assumed some right to rule and have misled humanity to believe it is legitimate or ‘real.’ But their declarations are based upon a fraud and this book evidences the true facts and provides the solution so anyone who wants to can take their first step to true freedom.
There is far more in the book which will not only help you to a greater understanding of what is the law, but shows how the law is nothing more than a set of rules that people unknowingly CONSENT to be bound by. This is the origin of the expression that ‘government is by the consent of the people.’ It is the understanding of the language and meaning of law which is crucial to understanding the system.
I define the legal distinction between ‘positive’ law as against ‘natural’ law and all man-made laws are called positive law which is separate to and inferiorto natural law. Positive law cannot bind you as a human being unless you unwittingly consent to be bound by it; because humans are truly only subject to the natural laws of the universe.
I go on to discuss the fraud that is ‘money’ and how it is nothing but a promissory note and proposes a solution for people to adopt to start to learn to live without the need for money.
We’re nearly there, humanity is waking up and many people have awoken to the reality of our existence, being one of manipulation, subservience and control. People know the system is corrupt and are seeking ways to break the structures which dominate our lives.”
This book provides one of the answers that people have been searching for.

“I have an upper second class business degree obtained after 2 years part-time study. I have two post graduate diplomas in law and qualified as a solicitor and later opened my own legal practice which I managed for six years until 2012 when I finally figured out what was inherently wrong with the system of laws which completely dominate and control our lives.

When I could evidence this knowing I stopped practicing law and now write to share my insight into the legal, political and social systems that we exist under.

15 years in law were to enable me to apply all my legal attributes to dissect the legal system for the benefit of humanity, because I understand the language of law.”
Marijuana Prohibition Is Ending + 10 Health Benefits Previous post
9/11 Conspiracy Solved: Names, Connections And Details Exposed Next post 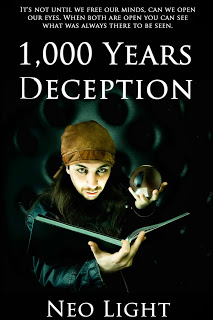 It’s ALL a CON