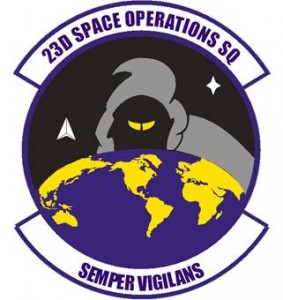 From humanities ancient history to the present day, symbolism has played a large role through out all stages and ages of human development. It must be considered another form of language and communication. From “secret societies” like the Masons, Illuminati and major multinational corporations, governmental organizations and financial institutions, intriguing symbolism has always been used. You can find it within the military industrial complex, the energy industry, the health industry and all other major unhealthy products that surround human beings on a daily basses.

Corporate logos, military symbolism and more have allowed more people around the world to wake up, and actually notice the connections around us. Who is responsible for these patches? How do they come into being? What is the inspiration? 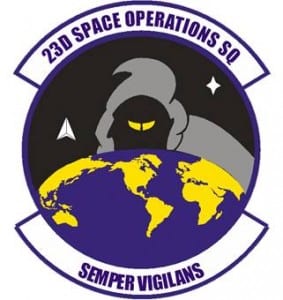 1. This is the 23rd Space Operations Squadron U.S. Air Force patch. It is one of eight Air Force Satellite Control Network Remote Tracking Stations. You can read more about them on the U.S. Air Force website, but how many people wonder about them? Personally, I started to wonder about them a while ago when I realized that trillions of dollars, much of which was unaccounted for, was going to the the department of defense.

If you really want to examine this reality on our planet, and the secrecy behind it, you have to look at the military industrial complex.

It looks like we have a being with one eye, and a slit for an eyeball hiding in a hood gazing upon planet Earth. What does this symbolize?

Symbolism has always been used, it has been another form of language and communication for millions of years. Military patches and symbols have always had some reptilian type attributes to their patches.

It’s hard to think about what the slit and one eye means, but let’s take a look at what “Semper Vigilans” means. It means always vigilant. Vigilant means alertly, watchful of and alert to detect trouble. Does this mean that the being, with slits for eye balls is always watching?

If we look at a translation, we also get “carefully observant or attentive, on the lookout for possible danger, a policy of open eyed awareness. The language is Latin.

This patch can be found here. On the official website for the U.S. Air Force, they do not hide  their patches and you cannot find information about the inspiration for the design. 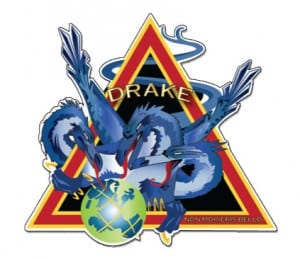 2. This patch belongs to the National Reconnaissance Office (You can tell this web site is real, only government sites can have a “.gov” URL.  It was painted onto the Alliance Atlas V rocket that was launched from space. On the bottom right corner of the triangle, we read “Non Morieris Bello”.

I’m sure it means more than nothing, the people involved within the military industrial complex don’t just say “lets make this patch up”. 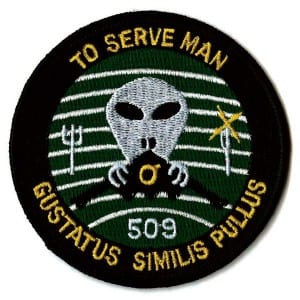 I definitely think that extraterrestrial technology had much to do with secret air force air craft, and still does to this very day.

It looks like a pitch fork on the left side with a couple of lightning bolts on the right side. The stealth bomber is being grasped by an extraterrestrial (Zeta Reticuli grey).

The patch reads “Gustatus Similis Pullus” which translates to “Tastes like chicken”. 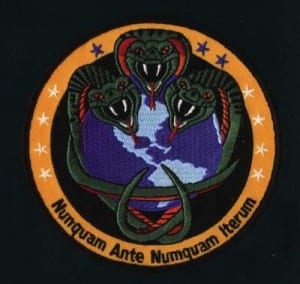 4. This patch was designed for the November 8th 1997 launch of spacecraft USA – 136, one of three to enter into the TRUMPET constellation.

As you can see, there are three cobras wrapped around the Earth, continuing the common draconian imagery theme that runs throughout the military.

(I would also like to draw your attention to the upper three stars, which might represent the infamous Orion’s Belt – a major Illuminati worship focus. Two stars are aligned, and one is offset). 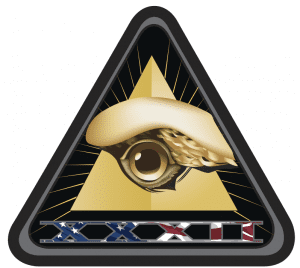 5. This is the mission patch for the NRO’s load that was launched aboard a United Launch Alliance Delta IV. This was the second in a series of six launches for the 50th anniversary of the NRO.

I’m sure many of you are familiar with this pyramid and eye like logo. We see it everywhere, and on every major corporation and financial institution on the planet. You can even see it on the back of the US $1 bill.

What is the connection between all symbolism we see in major corporations belonging the same bloodlines that connect with all major ruling facets of our world? Pyramids, all seeing eyes and reptilian references.

This is a common trend throughout modern day times as well as ancient history. It appears it is not being done by accident. Major bloodline connections and symbolism has been covered in depth on CE as well as many other websites, feel free to research this topic more if it is of interest to you. The answers are so often right in front of us.

A Cry To America From A Syrian Mother Previous post
Have You Ever Wondered Why You Are Here? Next post