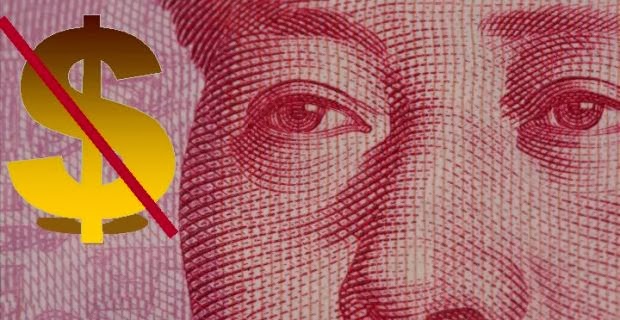 We assume it is a coincidence that on the day in which we demonstrate China’s relentless appetite for gold, driven by what we and many others believe is the country’s desire to have a call option on a gold-backed reserve currency when the time comes, just posted in China’s official press agency, Xinhua, is an op-ed by writer Liu Chang in which he decries the “US fiscal failure which warrants a de-Americanized world” and flatly states that the world should consider a new reserve currency “that is to be created to replace the dominant U.S. dollar, so that the international community could permanently stay away from the spillover of the intensifying domestic political turmoil in the United States.”

Of course, if China were serious, and if the world were to voluntarily engage in such a (r)evolutionary reserve currency transition, then all Magic Money Tree theories that the only thing better than near infinite debt is beyond infinite debt, would promptly be relegated to the historic dust heap of idiotic theories where they belong. 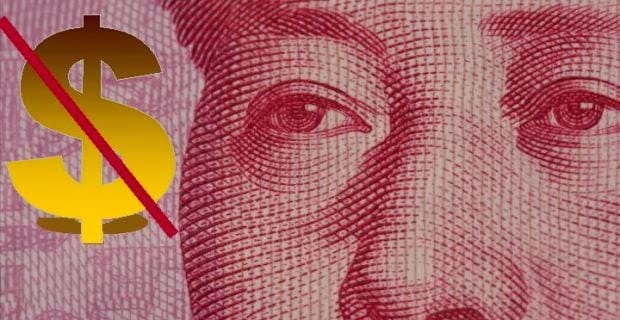 Some of China’s (which as a reminder is the single largest offshore holder of US Treasury paper, and the second largest of all only second naturally to the Federal Reserve whose $85 billion in monthly monetizing “flow” is what is keeping rates from exploding higher) thoughts as captured in the Xinhua Op-ed:

– Reform of the world’s financial system should include the introduction of a new internatonal reserve currency to replace the U.S. dollar;

– The international community could thus permanently stay away from the spillover of intensifying domestic political turmoil in the U.S.;

– Fiscal impasse in the U.S. is a good time for “befuddled world” to start considering building a “de-Americanized world”;

– Impasse has left many nations’ dollar assets in jeopardy and the international community agonized;

– Other cornerstones should be laid to underpin a de-Americanized world, including respect for sovereignty, recognizing authority of UN in handling global hotspot issues and giving developing and emerging market economies more say in major international financial institutions;

– Purpose of such changes is not to “completely toss the United States aside,” rather to encourage Washington to play a much more constructive role in addressing global affairs;

Of course, if and when the day comes that the USD is no longer the reserve currency, kiss America’s superpower, or any power, status, which is now based purely on the USD’s reserve currency status, and the ability to fund half the US budget deficit with debt promptly monetized by the Fed, goodbye.

Finally, as a reminder… 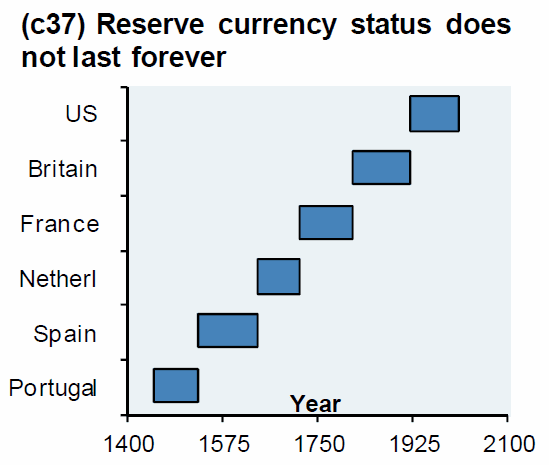 As U.S. politicians of both political parties are still shuffling back and forth between the White House and the Capitol Hill without striking a viable deal to bring normality to the body politic they brag about, it is perhaps a good time for the befuddled world to start considering building a de-Americanized world.

Emerging from the bloodshed of the Second World War as the world’s most powerful nation, the United States has since then been trying to build a global empire by imposing a postwar world order, fueling recovery in Europe, and encouraging regime-change in nations that it deems hardly Washington-friendly.

With its seemingly unrivaled economic and military might, the United States has declared that it has vital national interests to protect in nearly every corner of the globe, and been habituated to meddling in the business of other countries and regions far away from its shores.

Meanwhile, the U.S. government has gone to all lengths to appear before the world as the one that claims the moral high ground, yet covertly doing things that are as audacious as torturing prisoners of war, slaying civilians in drone attacks, and spying on world leaders.

Under what is known as the Pax-Americana, we fail to see a world where the United States is helping to defuse violence and conflicts, reduce poor and displaced population, and bring about real, lasting peace.

Moreover, instead of honoring its duties as a responsible leading power, a self-serving Washington has abused its superpower status and introduced even more chaos into the world by shifting financial risks overseas, instigating regional tensions amid territorial disputes, and fighting unwarranted wars under the cover of outright lies.

As a result, the world is still crawling its way out of an economic disaster thanks to the voracious Wall Street elites, while bombings and killings have become virtually daily routines in Iraq years after Washington claimed it has liberated its people from tyrannical rule.

Most recently, the cyclical stagnation in Washington for a viable bipartisan solution over a federal budget and an approval for raising debt ceiling has again left many nations’ tremendous dollar assets in jeopardy and the international community highly agonized.

Such alarming days when the destinies of others are in the hands of a hypocritical nation have to be terminated, and a new world order should be put in place, according to which all nations, big or small, poor or rich, can have their key interests respected and protected on an equal footing.

To that end, several corner stones should be laid to underpin a de-Americanized world.

For starters, all nations need to hew to the basic principles of the international law, including respect for sovereignty, and keeping hands off domestic affairs of others.

Furthermore, the authority of the United Nations in handling global hotspot issues has to be recognized. That means no one has the right to wage any form of military action against others without a UN mandate.

Apart from that, the world’s financial system also has to embrace some substantial reforms.

The developing and emerging market economies need to have more say in major international financial institutions including the World Bank and the International Monetary Fund, so that they could better reflect the transformations of the global economic and political landscape.

What may also be included as a key part of an effective reform is the introduction of a new international reserve currency that is to be created to replace the dominant U.S. dollar, so that the international community could permanently stay away from the spillover of the intensifying domestic political turmoil in the United States.

Of course, the purpose of promoting these changes is not to completely toss the United States aside, which is also impossible. Rather, it is to encourage Washington to play a much more constructive role in addressing global affairs.

And among all options, it is suggested that the beltway politicians first begin with ending the pernicious impasse.