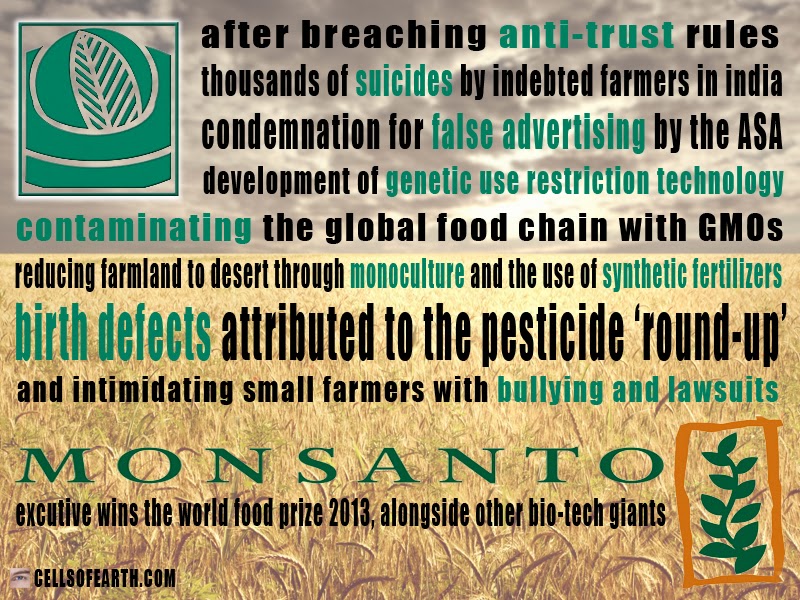 As Lily Tomlin has noted, “No matter how cynical you get, it’s almost impossible to keep up.”

For example, imagine if a prestigious group announced that this year’s “World Environmental Prize” is being awarded to BP, for its unique contribution to the ecology of the Gulf of Mexico. No way, you say? Too absurd?

Right, but try this one: Imagine that an Iowa group announces that its “World Food Prize” will go to Monsanto for pushing its patented, pricey, genetically-tampered Frankenseeds on impoverished lands as an “answer” to global hunger. This would be so morally perverse that the “cyn” in cynical would be spelled s.i.n. Yet, it has actually happened.

Rather than encouraging sustainable farming and self-sufficiency in impoverished communities as a way to alleviate poverty and malnutrition around the world, this year’s World Food Prize has been “won” by a profiteering, biotech, seed-and-chemical monopolist that’s the freakish opposite of sustainability. 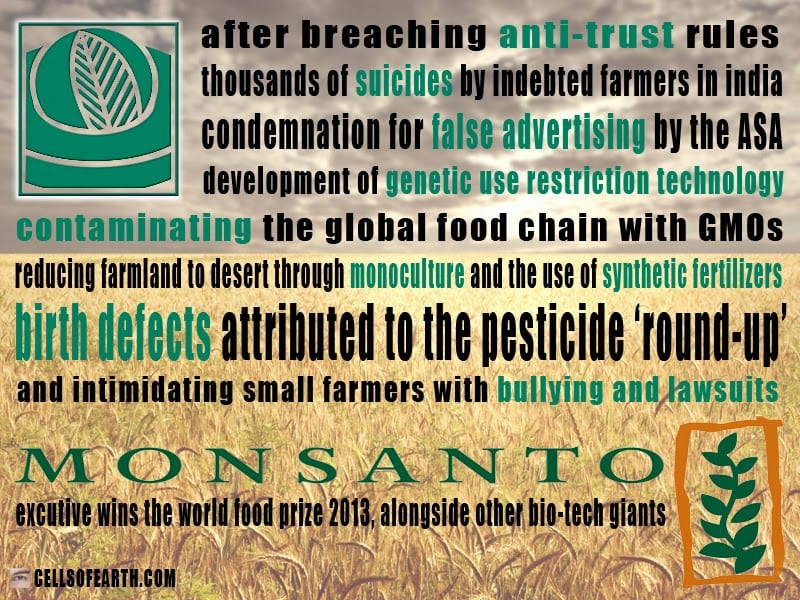 Monsanto, which owns 90 percent of the world’s genetically modified seeds, is globally infamous for bullying family farmers, bribing and corrupting governments, stiffing independent scientific inquiries into its hokum, running false ads and fraudulent PR campaigns, and going all out to keep consumers from knowing that the crops produced by its seeds contain alien, bioengineered DNA and have not been tested for long-term health and environmental problems.

Why would this avaricious outfit get any sort of award, much less one that can give it a false legitimacy as a corporate “savior” for the world’s poor? Perhaps because Monsanto is a major funder of the World Food Prize. Indeed, the foundation that hands out the award is headquartered in downtown Des Moines in a historic building that recently got a spiffy remodeling, thanks to a $5 million donation from — you guessed it — Monsanto. The corporate honoree has also been a steady donor to the food prize foundation, giving some $400,000 to its promotion of industrial agribusiness in the last dozen years.

It was my privilege to go to Des Moines last week for Monsanto’s World Food Prize extravaganza. Well, I didn’t exactly get into the ceremony where the halo was being fitted on this predatory proliferator of proprietary GMO seeds. In fact, I wasn’t even allowed to enter the Monsanto-financed edifice, wasn’t invited to sip sauvignon blanc at the Rockefeller reception on the patio, and didn’t get to mingle with the corporate, political, and foundation backscratchers at the official hullabaloo.

Rather, I was down the street at the graceful First United Methodist Church, where more than 500 of us scruffy “outsiders” gathered in protest of the Monsanto absurdity. There, real-life Iowa farmers spoke plainly about the myriad of abuses they have endured at the hands of the genetic manipulator.

One pointed out that if the corporation genuinely gave even one damn about hunger, it could’ve used its immense lobbying clout in Washington this year to stop Congress from stripping the entire food stamp program from the farm bill. Instead, Monsanto didn’t lift a finger to help fend off hunger in our own country. It doesn’t care at all about feeding the world, he said with disgust, it cares about profits, period.

Indeed, Monsanto is a pitch-perfect example of what Pope Francis was referring to in May, when he declared: “The worship of the golden calf of old has found a new and heartless image in the cult of money and the dictatorship of an economy which is faceless and lacking any truly humane goal.” How ironic, then, that Monsanto bought this food prize for itself in order to masquerade as a world hunger fighter, hoping to persuade the Vatican to bless its demonic effort to force the world’s poor farmers to buy and become dependent on its altered seed.

The World Food Prize Foundation has grandly dubbed its award “The Nobel Prize for Agriculture.” But Monsanto has zero to do with agri-Culture. It is the agri-Business face of the cult of money that Francis warned about — and it has turned this award into the “Ignoble Prize.”

By Jim Hightower, Nation of Change;

“This statement is supported by 81 Councillors of the World Future Council, a network of global luminaries who “form a voice for the rights of future generations,” and/or Laureates of the Right Livelihood Award, often called the Alternative Nobel. Supporters’ names appear below.”

In honoring the seed biotechnology industry, this year’s World Food Prize — to many, the most prestigious prize in food and agriculture — betrays the award’s own mandate to emphasize “the importance of a nutritious and sustainable food supply for all people.” 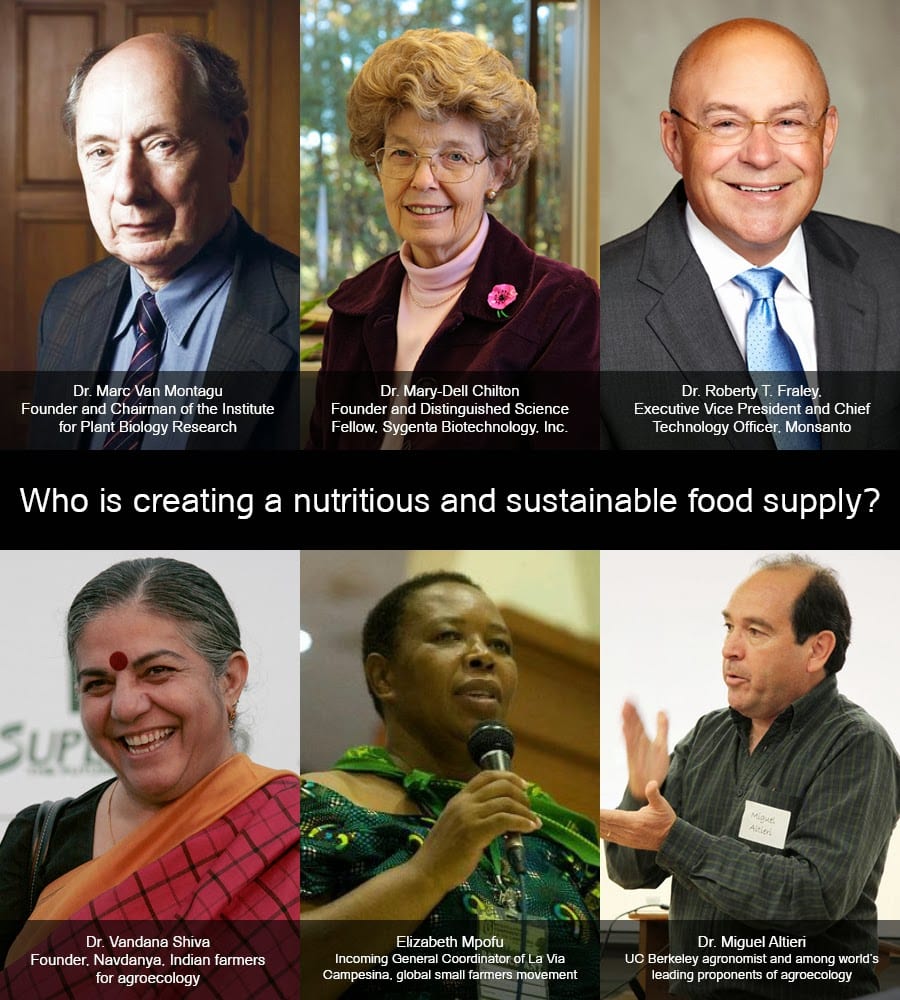 The 2013 World Food Prize has gone to three chemical company executives, including Monsanto executive vice president and chief technology officer, Robert Fraley, responsible for development of genetically modified organisms (GMOs). Yet, GMO seeds have not been designed to meet the Prize’s mandate and function in ways that actually impede progress toward the stated goals of the World Food Prize.

Almost twenty years after commercialization of the first GMO seeds, by far the most widely used are not engineered to enhance nutrient content, but to produce a specific pesticide or to resist a proprietary herbicide, or a combination of these traits. Even in reducing weeds, the technology is failing, for it has led to herbicide-resistant “super weeds” now appearing on nearly half of American farms.

GMO seeds undermine sustainability in other ways as well.

While profitable to the few companies producing them, GMO seeds reinforce a model of farming that undermines sustainability of cash-poor farmers, who make up most of the world’s hungry. GMO seeds continue farmers’ dependency on purchased seed and chemical inputs. The most dramatic impact of such dependency is in India, where 270,000 farmers, many trapped in debt for buying seeds and chemicals, committed suicide between 1995 and 2012.

GMOs also threaten sustainability because they continue agriculture’s dependence on diminishing and damaging fossil fuels and mined minerals, as well as a wasteful use of water.

This award not only communicates a false connection between GMOs and solutions to hunger and agricultural degradation, but it also diverts attention from truly “nutritious and sustainable” agroecological approaches already proving effective, especially in the face of extreme weather. The Rodale Institute, for example, found in its 30-year study, that organic methods used 45 percent less energy and produced 40 percent less greenhouse gases and outperformed chemical farming during drought years by as much as 31 percent.

Further evidence from around the world is showing how ecological methods dramatically enhance productivity, improve nutritional content of crops, and benefit soil health, all without leaving farmers dependent on ever-more expensive inputs. The United Nations, through its Office of the Special Rapporteur on the Right to Food, has documented ecological agriculture’s potential in hungry regions to double food production in one decade. Chaired by former World Food Prize awardee Dr. Hans Herren, the 2008 International Assessment of Agricultural Knowledge, Science and Technology for Development (IAASTD) report, developed by 400 experts and endorsed by 59 governments, calls for redirection of agricultural development toward such sustainable practices. Agroecology and food sovereignty are emerging solutions shaped and chosen by scientists and citizens worldwide.

Note that the World Food Prize mandate is also to recognize contributors to food “for all people,” but GMO seeds make this goal harder to reach. Most GM crops are used for feed for livestock, processed food, or fuel — products not accessible to hungry people. Moreover, the planet already produces more than enough food for all, and 40 percent more per person than in 1970; yet today 870 million people, still suffer from extreme, long-term undernourishment because they lack power to access adequate food. Developed and controlled by a handful of companies, genetically engineered seeds further the concentration of power and the extreme inequality at the root of this crisis of food inaccessibility. Monsanto, for example, controls 90 percent of the U.S. soybean crop and 80 percent of the country’s corn and cotton crops.

The choice of the 2013 World Food Prize is an affront to the growing international consensus on safe, ecological farming practices that have been scientifically proven to promote nutrition and sustainability. Many governments have rejected GMOs, and as many as two million citizens in 52 countries recently marched in opposition to GMOs and Monsanto. In living democracies, discounting this knowledge and these many voices is not acceptable.

The 81 signatories below are Councillors of the “World Future Council” and/or Laureates of the “Right Livelihood Award”:

29 COUNCILLORS OF THE WORLD FUTURE COUNCIL
(An asterisk indicates the signer is also a Right Livelihood Award Laureate but listed only once.)