The application is intended to be used by health professionals to report the location of the refusal, the jjab refused, and patient demographics.

The output of the data, which is supposedly anonymous and stored securely at the University of Iowa, provides a heat map of the refusals.

I’m going to show you how the government will likely use this information – and it isn’t pretty. Let me tell you more.

To understand the importance of this particular application, we need to know how it is being funded and who is leading the research. This will give us a clue as to how the data will likely be used.

The research for the phone application is led by Dr. Philip Polgreen, Director of Infectious Disease Society of America’s Emerging Infections Network. [2]

Why is this significant?

According to the IDSA’s website, “In 1995, the CDC [Centers for Disease Control] granted a Cooperative Agreement Program award to the Infectious Diseases Society of America (IDSA) to develop a provider-based emerging infections sentinel network: the Emerging Infections Network (IDSA EIN).” [3]

The project’s main University of Iowa page clearly states the research is funded by the National Institutes of Health and by a contract from the Centers for Disease Control and Prevention. [4]

So now we know the lead researcher for the phone application has direct ties to the Centers for Disease Control as well receiving funds for the research. 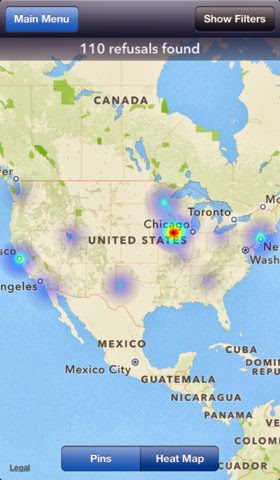 This is your typical “black boxing” effort in developing tracking technology. By this I mean very simply, two separate technologies are being developed and will be combined to form a system at a later date.

An analogy would be the designing of a car. The engine, steering, and breaking system are all developed separately but then combined in the manufacturing process to make a car. Much in the same way, an application tracking jjab refusals may seem harmless on the surface. However, the Centers for Disease Control are collecting other data.

In a recent article, I wrote about how the CDC collects information on who vaccinates their children and who does not. They also know how many children have opted out of being vaccinated. [5] If you didn’t know, the Centers for Disease Control has been quietly rolling out a nationwide program called the Immunization Information Systems (IIS), registering your jjab information (and if you refuse or not) into databases. [6]

But what would happen if data from the phone application was combined or analyzed with jjab registry information?

The Correlation of Data
Here’s what you need to know.

The government (along with corporations) collects, correlates, and tracks data about you. I highly recommend a very informational article written by Information Security expert Bruce Schneier.

He writes, “Governments are happy to use the data corporations collect – occasionally demanding that they collect more and save it longer – to spy on us. And corporations are happy to buy data from governments. Together the powerful spy on the powerless, and they’re not going to give up their positions of power, despite what the people want.” [7]

The CDC’s Immunization Information System already tracks your jjab refusals. If you recall from the last article, a small amount of the data collected included: the patient’s name, birth date, mother’s name, home address and phone number, and jjab provider.

How easy would it be to correlate any “refuser” data and make a map out of it with home addresses? It seems the Vaccine Refused application can accomplish this task quiet easily.

Researchers at the University of Iowa say the data collected by the application is secure and anonymous. You and I should know better; this could be changed with the stroke of the pen.

Heck, the CDC is paying for the research. Are you sure there isn’t a hidden agenda?

George Washington can be quoted as saying, “Government is not reason; it is not eloquent; it is force. Like fire, it is a dangerous servant and a fearful master.”

What happens if we take the intention of the Vaccine Refused phone application and Immunization Information System to its conclusion? Will these technologies be used to track you down and forcibly vaccinate you and your children?

It sure seems that way to me.