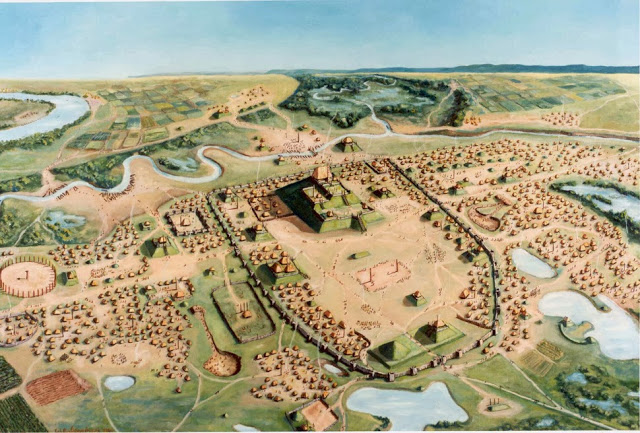 The Greatest Ancient City of North America, Transformed by Mysterious Fire in 1170 CE

One thousand years ago, in the place where St. Louis, Missouri now stands, there was once a great civilization whose city center was ringed with enormous earthen pyramids, vast farmlands, and wealthy suburbs. For hundreds of years it was the biggest city in North America. Then a mysterious fire changed everything.

The city that once existed in St. Louis’ current footprint is known today as Cahokia, and its creators are commonly called the Mound Builders because of the 120 or so enormous mounds they left behind. Shaped much like the stone pyramids of the Maya civilization to the south, these mounds rose up hundreds of feet, and were often built on top of tombs.

At their summits were ceremonial buildings made from wood and thatch. Unfortunately, many of these magnificent creations were destroyed in the nineteenth century when St. Louis was built. Below, you can see one of the only remaining pyramids, known as Monk’s Mound.

The first evidence of a settlement in the Cahokia area is from the year 600 CE, at a time when the Maya civilization would have been at its peak. But it wasn’t until after the largest cities of the Maya began to fall in the 1000s that Cahokia came into its own. It’s estimated that the city center held as many as 15,000 people (making it comparable in size to European cities of the same era), and reached the height of its productivity between roughly 1000-1300 CE. 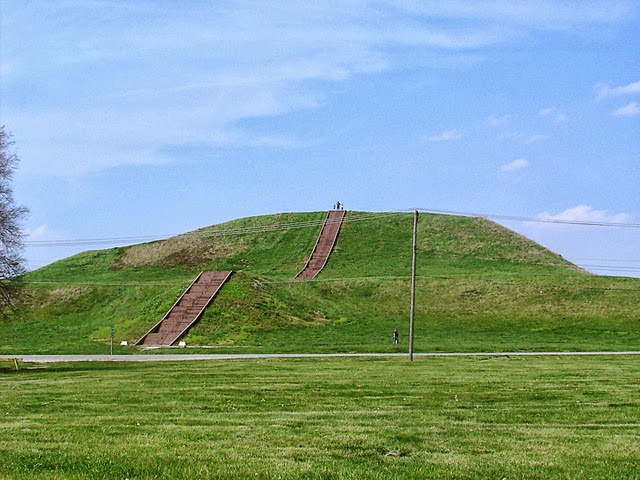 And right around the middle of that time period, in about 1170 CE, a devastating fire ripped through the main ceremonial plaza at the center of the city. After the fire, it appears that the city was a changed place: New architectural designs sprung up, along with new defensive walls. There was also a sudden influx of clay plates featuring sun symbolism. What happened? Who started that fire?

A new scientific investigation published this month in the Journal of Field Archaeology attempts to puzzle out what caused the fire, and what happened in the aftermath. University of Illinois at Urbana-Champaign archaeologist Timothy R. Pauketat and his colleagues pored over new dig sites in East St. Louis, and examined the evidence for the fire. The evidence is extremely strange. What we know is that the fire likely consumed over 100 thatched buildings, which were all packed with freshly-made luxuries like floor mats, clay pots, pipes, ceremonial bones like snake vertebrae, and baskets of corn kernels. Already, this is a bit odd.

A typical home would not contain items that were all new — you’d find garbage, gnawed bones, chipped pots, and corn cobs along with the kernels. In fact, none of these houses had any garbage pits associated with them at all. Adding to the mystery is that these houses seemed hastily constructed, and were placed much more closely together than homes elsewhere in the city. Also, they were built in an area that Pauketat and colleagues describe as overdeveloped but underused, a region more like a public event space than a neighborhood.

The researchers believe that the fire might have been an accident, or caused by warfare. But far more likely is that it was actually a ceremonial fire, a kind of mass sacrifice, which marked a dramatic shift in the cultural and political life of Cahokia. It wasn’t uncommon for the Mound Builders to burn the structures they built at the top of mounds in ceremonial events.

Often, they would include offerings like the ones found in those burned houses, especially corn kernels. Indeed, these ceremonial fires sound a lot like Burning Man, right down to the drug use — Cahokians liked to imbibe something called “black drink,” which was a super-strong caffeinated brew that probably got everybody seriously jazzed until they threw up.

But if this fire was sacrificial, it was on a scale that was unprecedented — at least as far as we can tell, from the archaeological record. There are other odd clues about this fire, too. Instead of rebuilding after the fire burned out, it appears that people simply swept up the coal and ashes and put them in tidy piles.

Nothing was rebuilt. This is particularly notable because in Cahokia and its outlying suburbs, homes that were damaged were typically rebuilt — often a duplicate structure would be built directly on top of the old one. So if this had been an accidental fire, or a casualty of war, we’d expect to see new homes on top. But there was nothing.

Pauketat and his fellow researchers also note that in the wake of the fire, Cahokian culture seemed to change in very specific ways. One very interesting shift is that people no longer built large, mansion-like homes that we believe were reserved for aristocrats and priests. These “mansions” were built in characteristic L and T shapes, and sometimes a ceremonial building would be circular.

After the fire, all of the buildings and homes were square or rectangular. It’s possible, suggest Pauketat and colleagues, that the fire was part of an uprising against an established group that had once occupied these more ostentatious homes.

There were other cultural changes too. I already mentioned that there is a sudden rise in popularity of sun imagery on clay plates. It’s possible that this was the sign of a new spiritual or political regime in the area. Still, people continued to build their characteristic mounds, and to farm. So many aspects of life remained the same — including the practice of building atop the pyramids. In other words, the old regime may have been toppled but many of the old ways continued on.

What’s certain, say the researchers, is that this fire marked a major turning point in Cahokia’s civilization, and perhaps the “beginning of the end.” By 1400, Cahokia and its environs had been almost entirely abandoned. It’s possible that the fire marked a decline in the city’s power, and the sacrifices were part of an ongoing effort to bring back the city’s former status.

As more excavations are done in East St. Louis, we can hope to find out more about this incredible lost civilization. For now, the story of its mysterious fire is a reminder that ancient civilizations are not monolithic. Like civilizations today, they underwent many changes and revolutions. What to us appears in retrospect to be a single entity known as Cahokia, may have been to the locals many cities and many cultures that just happened to inhabit the same region.

What’s fascinating is that this region along the Mississippi is an area that has been home to many cities, for hundreds of years. After all, St. Louis occupies the old footprint of Cahokia today. Perhaps, in another millennium, the archaeologists who occupy some future city in the area will be uncovering the old breweries and coal mines of St. Louis and wondering what happened to the people who worked in them.

Read the scientific paper, and find out about visiting the Cahokia Mounds.

Newly Discovered Asteroid to Hit Earth Within 24 Hours -- NASA Says It Will Not! Previous post
UFOs Hovering Over Smoking Ship in California Next post