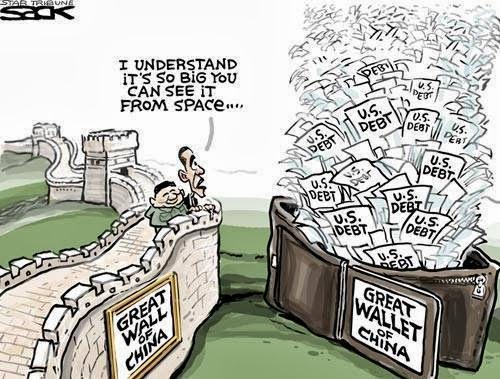 A dirty secret regarding the U.S. economic “recovery” [1] that the government and its banking cronies would rather you didn’t know is that China holds over $2 trillion in U.S. reserve debt notes that they have been wanting to dump ASAP as the dollar continues its death spiral into nothingness due to Ben Bernanke’s lunatic money-printing.

Knowing that dumping U.S. Treasuries en masse would cause their value to crash, thus hurting their economy, China has instead gone on a buying spree, trading their funny-money U.S. dollars in to strategically buy up failing U.S. corporations and real estate to the tune of over $100 billion per year.

This has caused U.S.’s trashed real estate market to temporarily rebound and inflate once again as U.S. dollars that nobody in their right mind wants gets dumped back into America. Who could have foresaw that America would eventually become the final dumping ground landfill for the unwanted and highly toxic U.S. dollar? Apparently, the rest of the world!

Just like in China, the vast majority of U.S. real estate is being flipped by speculators looking to make a quick buck. And like in China, no one is actually living in many of these flipped properties. However, all the while, the Liar in Chief, like a broken record, continues to cite this real estate rebound as proof that America is on the road to recovery even as unemployment, welfare rolls and layoffs skyrocket, states file for bankruptcy, all necessitating $85 billion per month in quantitative easing Federal Reserve funny money just to keep the nation on life support.

As bad as the imminent real estate re-crash is going to be for the U.S., the one currently counting down in China could, like a giant-sized thermonuclear virus, start an economic contagion that may wipe out what’s left of the world’s economies in an instant.

And this may well be by design as George Bush Sr. and his Rothschild-Rockefeller [2] partners have been patiently maneuvering the global economic collapse as the excuse to usher in their New World Order plan for a one world centralized government. I suppose you could reasonably make an argument that I’m just being a conspiracy theorist, yet good ‘ol Georgie just keeps repeating his diabolical plan over and over again. He must really believe in the old adage that if you say something often enough, you will eventually make it so.

If you’ve read any of my past articles, you know I always end what could be seen as some really depressing observations with a possible solution for the rest of us that aren’t a part of the so-called Elites of the world and this time is no different. The truth is that despair will get us nowhere and yet, that is exactly what is expected of us.

When we give in, then lay down in the face of tyranny, we truly become slaves to it. The trick is not to do what seems logical and fight back against it for we cannot win that battle. That would only serve to fuel the intensity of the tyrannical vibration and create more of it. Resistance truly is futile and is exhausting.

Instead, the way or path to true human sovereignty is by unplugging from that diabolical program altogether. This allows one to rise above its toxic frequency to one more in tune with naturally sustaining conscious human health and evolvement, gifts we were all born to manifest by the way. I know, it sounds great and all but you might be saying “how can we possibly get back to that when it appears to be so late in the game?” Fair enough, yet I’ll say this: “we can never solve a problem from the same level of consciousness that created it in the first place.”

I forget who said this, Einstein maybe, but it’s meaning is clear. We can only see the forest for the trees unless we view the situation from a higher perspective. Get it? Raise our vibration, then we can see the whole picture and not just pieces of it! Only then, can we make truly life-affirming choices in our lives that also encourage others to do the same. Not to plug my own past articles or anything, but I have written in some detail previously regarding ways to accomplish just that so here I will provide just a quick review.

Four steps to reclaim your freedom

1. Get out of paper assets as they are designed to enslave people with the illusion of value where there is none. This includes dollars, CDs, IRA, 401k, stocks, bonds and bank savings accounts. When banks inevitably fail en masse, [5], [6] the citizenry will suffer the same fate the people of Cyprus did – confiscation of savings. And no, FDIC will not save anyone.

They have roughly $30 billion dollars of insurance money to cover well over $10 trillion in customer banking deposits so the people will not see a dime. The banking and stock market ponzi scheme needs a constant supply of suckers to sink their vampiric fangs into so the only way to starve them to death is to avoid their parasitic brothels altogether.

So what are we to do with our savings? There is a reason the rest of the world is trading in much of their fiat wealth to buy up gold and silver coins and bars at this time. As history has repeated ad nauseum, all fiat currencies return to their real value within forty years – and that value is zero. And guess what? The U.S. and the rest of the world for that matter, has been on a purely fiat monetary system for exactly forty years now.

Predictably, it is headed back to a gold and silver-backed monetary standard as it has repeatedly done for over five thousand years. Only those with eyes to see will be spared from being run over by the fast approaching economic train of destruction and a lifetime of abject poverty. It is time to see!

2. Avoid all GMO junk foods, [7] sodas, jjabs [8] and prescription meds in favor of organic foods, plants and herbs that elevate your overall health and consciousness. Heck, grow your own foods too! Not only does it save you a lot of money, it’s much better for you.

As I’ve written previously, GMOs, jjabs and meds are purposely designed to cripple human health, creating a population of disease-ridden, confused zombies that are easily led to believe and do virtually anything.

3. Turn off the TV. It was originally designed to mind control the masses into a low vibratory, vegetative state of unconsciousness. Is it any wonder TV shows are called television programming?

It’s become the greatest way to shape the minds of entire populations into believing reality is whatever is transmitted out of that box and into their brains. Television does not represent truth, but rather corrupts it. It is time to unplug from that soul-sucking box of lies forever!

4. Meditate [9] and exercise at least a little bit regularly. Get off the couch and move your body, get back in touch with nature and definitely get some sunlight everyday. The terrible myth that sun exposure is bad for you and causes skin cancer is just another terrible lie. In fact, it is the toxic ingredients in sunblock that cause melanoma. The sun bathes the body in vitamin D which is essential for good health. Lack of it leads to disease and depression, aka the ideal citizen.

Breathe deeply and by all means, avoid negative, nasty and narrow-minded people like the vampire plague they are in favor of healthy individuals who help keep us happy and resonating at a higher frequency.

Incorporating those few things can not only bring peace and harmony into our lives, but it also sends out a vibration to others who will want to do the same for themselves.

And isn’t that really what we’re all here to do for one another?

Until next time, start to take little actions everyday that open doors to higher levels of consciousness to see who we really are and what we are truly capable of receiving and giving to the world. I’m sure you will agree that’s a journey well worth taking and all it takes is the first step.

5 Tips To Find Peace Within Yourself Previous post
"iPhone 5s Fingerprint Database Links To U.S Govt." -- Anonymous Claim They Can Prove It Next post