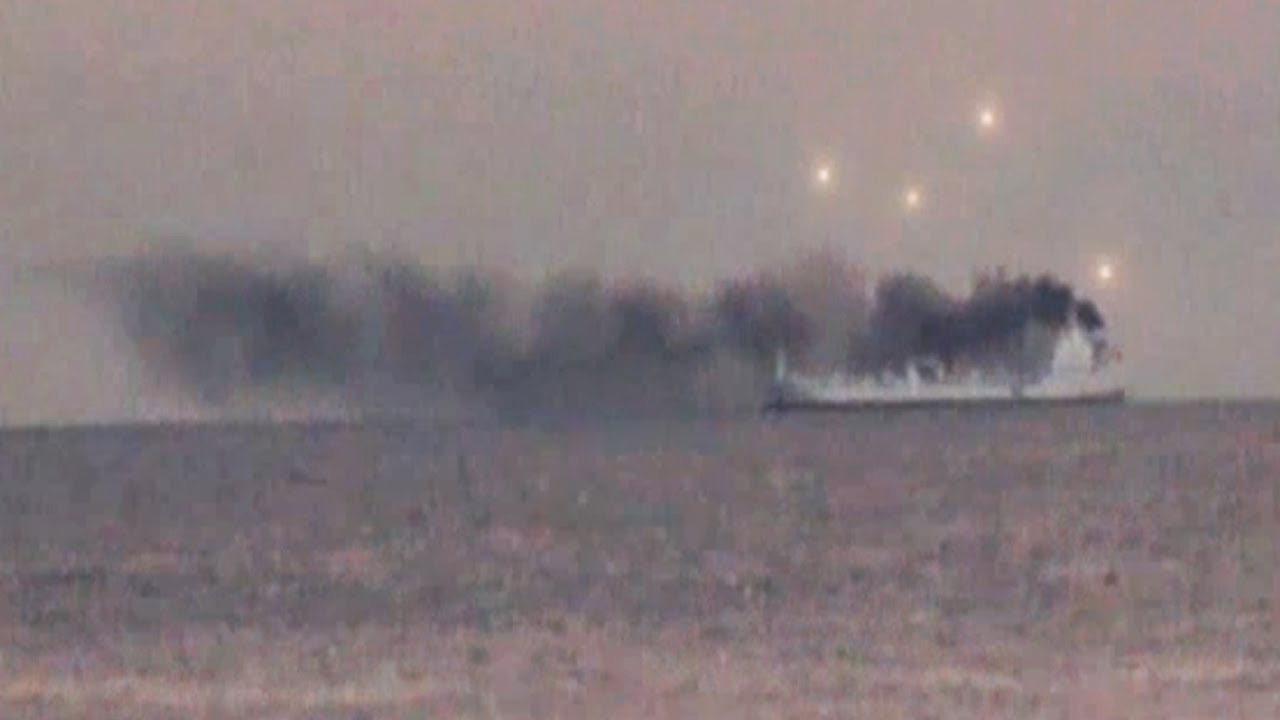 A number of unusual glowing lights recently appeared in the sky near a smoking ship reportedly somewhere off the California coast.

They moved in that dazzling way that gets UFO enthusiasts excited, lighting up the sky. Then, one-by-one, the lights disappear in different directions away from the ship.

According to the YouTube poster of the video, looknowtv, these unidentified objects were “recorded in California from the viewpoint of the beach.

You can see a few UFOs flying over or behind this ship which appears to have a large amount of smoke coming from it.”

The lack of further details from the videographer and YouTube poster raises many red flags and questions of credibility here.

So, HuffPost showed the video to one of our resident UFO image and video analysts, Marc Dantonio, owner of FX Models, a company that creates special miniature prototypes for government and military projects.

“Remarkably, this does look like something I have seen!” Dantonio told HuffPost in an email. “To me, it looks like these are jets with afterburners on, heading away from the camera.”

Dantonio refers to a new radar-evading military fighter jet — the F-35 — with the capability of hovering like a helicopter. The F-35 is currently undergoing successful tests.

“This could be one of the F-35 Joint Strike Fighter wings doing training over the ocean where the afterburner is allowed,” Dantonio suggested.

“As the first one peels off to the lower right, the aspect ratio of its circular exhaust and afterburner shape changes with respect to the camera and gradually fades away. Similarly, the others — except for one — follow suit. So, to me, this looks exactly like a tactical training mission which happened to be seen over a ship that looks like its engines were being cycled up.”

Dantonio is also convinced the video doesn’t show flares in the sky.

“Although the initial video event shows something that looks like flares, the subsequent behavior does not match the expected behavior,” he said. “Parachute flares would not appear to hang in the sky like this unless they were quite far away, perhaps 30-plus miles away when seen.”

There seems to be a new trend with the online posting of UFO videos. It used to be more common to see videos posted by individuals who simply wanted to share their experiences more directly with the viewers. This often included posters using their own names or, at the very least, a pseudonym that partially identified who they were.

It also allowed for many hoaxers using various techniques to try and pull the UFO wool over our eyes with phony pictures and videos.

Now we’re seeing an upswing in what can be called commercial UFO agencies. The UFOs-over-the-ship-video comes to us from looknowtv. A previous HuffPost story about UFOs and night vision photography focused on alleged unidentified objects seen over Germany — presented by the new UFOFilesTV agency.

The problem with this agency-based orientation is a lack of vital information about the posted videos, i.e. names of the alleged videographers, exact sighting dates and locations and, most important, personal descriptions about the circumstances surrounding the reported events.

Those are key elements of any credible UFO investigation. Yet, we’re not being presented with that information by the so-called UFO agencies.

In the case of this current video, the agency at least acknowledges acquiring the video from someone identified as Taylor L., but no other critical information about the event is offered.

While, on the surface it may seem like these UFO agencies are promoting more videos, the result may turn out to be less credibility.

The Greatest Ancient City of North America, Transformed by Mysterious Fire in 1170 CE Previous post
The Real Reason Why NASA Is Being Shut Down Next post