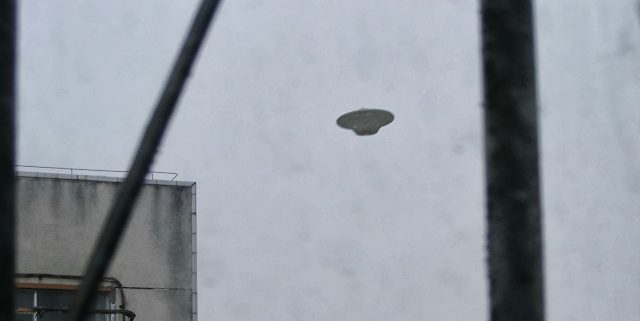 Why do we let ETs Play Hide and Seek With Us?

More than 6,000 pages of reports describing people’s experiences with unidentified flying objects between 1994 and 2000 have just been released under a three-year project between the Ministry of Defence and The National Archives.

A UFO sighted by Boston and Skegness police, in Lincolnshire, was captured on film. The police reported the sighting to the coastguard, which in turn alerted ships in the North Sea, where a crew reported seeing more UFOs. Simultaneously, an unidentified blip was picked up on radar over Boston.

Also included in the latest release is a letter from senior MoD official Ralph Noyes, in which he describes seeing a film of UFOs captured by RAF fighter pilots in 1956. Mr Noyes claims the footage was shown at a secret underground screening arranged for air defence staff at the MoD in 1970.


The files are available to download for free for a month from the National Archives website (http://ufos.nationalarchives.gov.uk). Dr. David Clarke from Sheffield Hallam University, an ‘expert in UFO history’ offers a brief video discussing some of the incidents that are reported. He discusses four or five apparently convincing incidents and debunks each.

Perhaps as a concession to fair minded reporting he mentions one case right at the end of the video that has not yet been debunked, but there is something in his description of this sighting referring to a craft “shaped like a ‘toblerone’ with rounded edges” that suggests a somewhat tongue in cheek approach.

There is no voice given on the National Archives site for any argument with Dr Clarke’s viewpoint let alone the chance for another ‘expert’ who might choose to highlight some of the as yet unexplained cases or disagree with Clarke’s point of view on the sightings he mentions.

A Government institution, the National Archive, that one would expect to be a neutral source of information to the public, is thus presenting an entirely one-sided view as fact. Visitors to the site who are new to the subject will be instantly advised that the tens of thousands of sightings cataloged in the National Archive can be dismissed almost entirely as bearing no relation to any extra-terrestrial phenomena.

The mainstream media in the UK and the USA is also implacable to any serious discussion of the subject and uniformly places it well into the lunatic fringe. The majority of the population will never be allowed to realize that this lunatic fringe includes thousands of high ranking military officials, of the calibre of men such as Admiral Lord Hill Norton, Chief Of Defence staff, who affirmed its out of this world nature, and Colonel Charles Halt, Deputy Commander of a US nuclear air base in Rendlesham England, who has witnessed and testified to the genuine nature of the phenomenon and its lack of a confirmatory explanation to this day.

They will be unaware of the tens of thousands of airline pilots, astronauts, navy personnel and air traffic controllers who have also testified to genuine and unexplainable sightings.

Men such as these with their high level of training would, one would have thought, be expert enough to know and distinguish terrestrial from extra-terrestrial phenomena.

It is a world sized disgrace that liars and cheats are made of thousands of sincere witnesses who provide much needed compelling evidence that the phenomenon is real and deeply troubling to millions of people. The arrogance and diffident attitudes towards the UFO phenomenon of a particular cartel of scientists and ‘rent a skeptic’  debunkers are too often the final verification accepted by mainstream reportage.

The profession by its very nature that is most wrong in things as they finally turn out are unquestionably scientists, yet we tend to believe what they say with nary a quibble. Funny isn’t it. It beggars belief.

So do extra-terrestrial visitors to our planet exist?

Let’s take a skeptical view: Perhaps the hundreds of thousands of witnesses who have reported encounters with alien phenomena are the victims, or even willing accomplices of media hype and subliminal messages unwittingly received by highly suggestible individuals.

Apart from the extreme unlikelihood that many millions of abductees reporting similar incidents are victims of mass delusion it is not only unlikely but impossible that the same mass delusion would have been a feature of the ancient past to explain the historical evidence for alien visitors. [1]

Medieval artists who chose to depict saucer shaped UFOs in the background of their paintings or ancient cave paintings across the world that are thousands of years old and depict beings identical to the Grey aliens described today. [2]

The whole alien phenomenon has been readily dismissed as the stuff of New agers, and science fiction buffs. Anti-gravity devices, teleportation, travel faster than the speed of light are put in stark context if one considers how easy it might have been to try to convince people in the nineteenth century about the possibility of current developments in bio-technology, digital technology, space travel and virtual reality.

If indeed we are subject to visitation by extra-terrestrial entities why are they choosing to keep the reality of their existence as elusive as they can? Furthermore, how is it that they are so amazingly successful at doing so without collusion with national governments?

Efforts to keep this knowledge away from the public have it seems resulted in an unmitigated success by governments and the authorities supposed to deal with them. Despite all the evidence to the contrary the control mechanisms that run the world’s mainstream media outlets have without exception managed to relegate the alien phenomenon as far into the outfield as it is possible for it to go. Why?

A handful of cases possibly linking the MMR jjab with autism led to millions of parents understandably refusing the jjab for their children. A rare side effect of aspirin in children has led to the medicine being banned for children under twelve.

Yet, despite volumes of evidence from reliable sources about alien interference and sometimes even assault on our species, we are not motivated to look further. We are not stirred even with the curiosity to seriously and pervasively explore the subject. We are happy to allow our media to sweep the whole subject under the carpet.

Why is this so? I can’t help feeling to quote Shakespeare in Hamlet that ‘there is something deeply rotten in the state of Denmark’ when it comes to looking meaningfully at the UFO phenomenon. You can include the USA and the UK as two of the main players in that rotten state of things.

But then with the lies perpetrated by both governments to bring about the Iraq war is it any surprise. Their callous misjudgments and devious wranglings have claimed hundreds of thousands of innocent lives.

Would you blindly trust them with the lives of millions of our children if the UFO phenomenon turns out to be true and predatory extra terrestrial entities are creeping and seeping their way into humanity for their own purposes and not ours?