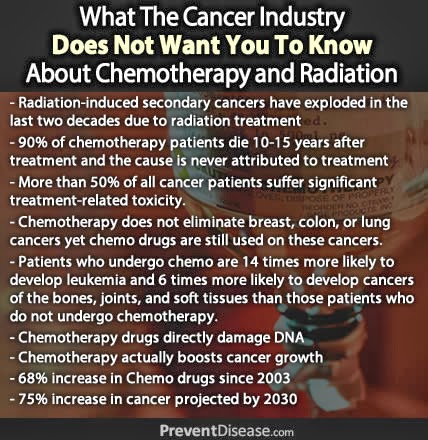 Cancer: The Chemotherapy and Radiation DECEPTION

What The Cancer Industry Does Not Want You To Know

They tell us chemotherapy saves lives, boosts long-term survival rates and does not damage healthy cells. All these statements by the cancer industry are false. Poison kills indiscriminately — always has and always will.

While damaging healthy cells, chemotherapy also triggers them to secrete a protein that sustains tumour growth and resistance to further treatment.

That’s right… chemotherapy will actually boost cancer growth and cancer treatment and is the leading cause of secondary cancers.

Vaccines, pharmaceuticals, diagnostics and therapies, dentistry, psychiatry and practically all medical research is an industry and driver of corporate profits. 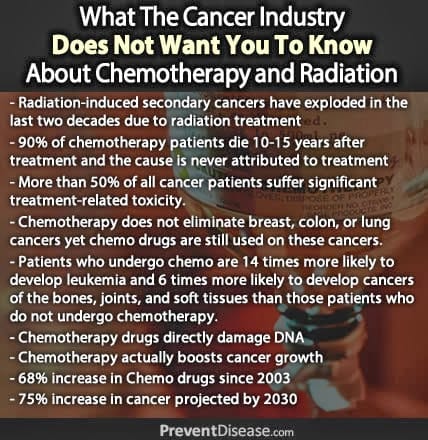 The cancer industry is particularly ironic because the products that cause many cancers are made by divisions of the same multinational corporations whose subsidiaries make the scanners and equipment that is used to diagnose cancers, the drugs used in chemotherapy and those given to prevent the cancer returning.

In what reality do we live in when cut, poison and burn are the only ways acceptable to treat cancer?

The cancer industry destroys or marginalizes safe and effective cures while promoting their patented, expensive, and toxic remedies that do more harm than good.

No chemotherapy drug has ever actually cured or resolved the underlying causes of cancer. Even what mainstream medicine considers “successful” chemotherapy treatments are only managing symptoms, usually at the cost of interfering with other precious physiological functions in patients that will cause side effects down the road. There is no such thing as a drug without a side effect.

Chemotherapy and Radiation May Kill Cancer, But They Also Kill You

Chemotherapy has a number of post-treatment adverse effects. Most chemotherapeutic agents do enter the brain and they can directly and indirectly produce a number of acute and delayed changes to the central nervous system. These effects can last for years, then dissipate, or, when they occur in young children, can ripple into adulthood.

The long-term survival rates of chemotherapy patients are grossly exaggerated because most of these patients end up dying of diseases unrelated to the original cancer itself, but instead related to the treatment.

Chemotherapy drugs (especially alkylating agents) are known to cause other cancers including leukemia many of these drugs fall into this class. Alkylating agents directly damage DNA of all cells. These agents are not phase-specific; in other words, they work in all phases of the cell cycle. Because these drugs damage DNA, they can cause long-term damage to the bone marrow and consequently affect long-term immunity.

Radiation therapy can also increase the risk of developing cancer in most people. The types of cancers linked to radiation therapy are vast, but primarily consist of leukemia and sarcomas. These cases typically develop a few years after radiation exposure with the peak of risk being about five to nine years after exposure.

Again, most patients that pursue radiation therapy develop secondary cancers related to treatment and not as a consequence of the original cancer. Radiation-induced cancers have exploded in the past two decades ever since radiation has proliferated as a treatment, usually secondary to chemotherapy.

Doctors Speak Out About The Cancer Industry

Dr. Robert Atkins, MD, of Atkins Diet fame once announced there are several cures for cancer, but there’s no money in them. They’re natural, effective, and inexpensive, no expensive drugs are involved but they require quite a lot of self-discipline from patients. It costs millions to fund research and clinical trials needed to produce a new cancer drug that can be patented and sold. Often these drugs create more illness.

It has been said that the key to success in the health business is to pull off the trick of making people patients for life. Consider how many people who registered a couple of abnormal blood pressure readings have been kept on medication until the medication killed them, when a quick fix course of drugs supported by major changes of diet and lifestyle would have returned their physical condition to an unmedicated healthy state.

According to Dr. John Diamond, M.D., “A study of over 10,000 patients shows clearly that chemo’s supposedly strong track record with Hodgkin’s disease (lymphoma) is actually a lie. Patients who underwent chemo were 14 times more likely to develop leukemia and 6 times more likely to develop cancers of the bones, joints, and soft tissues than those patients who did not undergo chemotherapy.”

Dr. Glenn Warner, who died in 2000, was one of the most highly qualified cancer specialists in the United States. He used alternative treatments on his cancer patients with great success. On the treatment of cancer in this country he said: “We have a multi-billion dollar industry that is killing people, right and left, just for financial gain. Their idea of research is to see whether two doses of this poison is better than three doses of that poison.”

Dr. Alan C. Nixon, past president of the American Chemical Society writes, “As a chemist trained to interpret data, it is incomprehensible to me that physicians can ignore the clear evidence that chemotherapy does much, much more harm than good.”

And according to Dr. Charles Mathe, French cancer specialist, “… if I contracted cancer, I would never go to a standard cancer treatment center. Only cancer victims who live far from such centers have a chance.”

Dr. Allen Levin stated: “Most cancer patients in this country die of chemotherapy. Chemotherapy does not eliminate breast, colon, or lung cancers. This fact has been documented for over a decade, yet doctors still use chemotherapy for these tumors.”

In his book, “The Topic of Cancer: When the Killing Has to Stop”, Dick Richards cites a number of autopsy studies which have shown that cancer patients actually died from conventional treatments before the tumor had a chance to kill them.

Researchers tested the effects of a type of chemotherapy on tissue collected from men with prostate cancer, and found “evidence of DNA damage” in healthy cells after treatment, the scientists wrote in Nature Medicine.

Chemotherapy works by inhibiting reproduction of fast-dividing cells such as those found in tumours.

The protein was taken up by tumour cells neighboring the damaged cells.

“WNT16B, when secreted, would interact with nearby tumor cells and cause them to grow, invade, and importantly, resist subsequent therapy,” said Nelson.

In cancer treatment, tumours often respond well initially, followed by rapid regrowth and then resistance to further chemotherapy.
Rates of tumour cell reproduction have been shown to accelerate between treatments.

“Our results indicate that damage responses in benign cells… may directly contribute to enhanced tumor growth kinetics,” wrote the team.

The researchers said they confirmed their findings with breast and ovarian cancer tumors.

Patients with incurable cancers are promised much greater access to the latest drugs which could offer them extra months or years of life, however many doctors have been urged to be more cautious in offering cancer treatment to terminally-ill patients as chemotherapy can often do more harm than good, advice supported by Nelson’s study.

The National Confidential Enquiry into Patient Outcome and Death (NCEPOD) found that more than four in ten patients who received chemotherapy towards the end of life suffered potentially fatal effects from the drugs, and treatment was “inappropriate” in nearly a fifth of cases.

Globally, almost 90% of patients who are administered chemotherapy die within 15 years of treatment either from secondary cancers, or a compromised immunity as a direct consequence of the treatment. Chemotherapy and radiation combined are the leading cause of secondary cancer worldwide.

There has been a 68% increase in the use of chemotherapy drugs since 2003 and despite the massive increase in the incidence of cancer since then; the risk factors (according to the cancer industry) for primary and secondary cancers are still related to tobacco, alcohol, occupational exposures and genetic determinants. Cancer treatment or diagnostics is never mentioned as a cause of any primary or secondary cancers.

Cancer is a leading cause of disease worldwide and if recent trends in major cancers are seen globally in the future, the burden of cancer will increase to 22 million new cases each year by 2030. This represents an increase of 75% compared with 2008.

More than half of all cancer patients suffer significant treatment-related toxicity. Treatment can also result in life-threatening infections or patients may simply die of their cancer.

When asked about how to improve a patient’s response and outcome, Nelson replied “alternatively, it may be possible to use smaller, less toxic doses of therapy.”

But small doses of poison are still poison.

The bottom line is that chemotherapy destroys virtually all cells and systems before getting to the actual cancer. This means your central nervous system, organ systems and your immune system (to name just a few) are all compromised even years after the treatment has subsided. Forget about cancer killing you because chemotherapy will do a much better job in the long term.

Chemotherapy causes healthy brain cells to die off long after treatment has ended and may be one of the underlying biological causes of the cognitive side effects — or “chemo brain” — that many cancer patients experience.

Conventional cancer treatment is a massive and expensive fraud–a non-treatment that sickens and kills more people than it ever “cures.” It can never cure anything because it poisons the body which only causes more disease in the future.

The question [of whether or not chemotherapy really extends life, ed.] can probably no longer be answered. In clinical studies the manufacturers always compare their new drugs with older cellular poisons. There are no control groups that are given no treatment at all.

In order to be allowed onto the market, it suffices to achieve a “statistically significant” advantage in one small group of hand- picked test subjects vs. those treated with some already approved cellular poison.