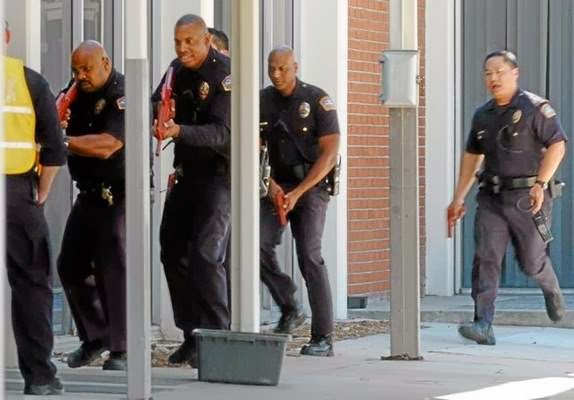 According to a report by the San Bernardino Sun [1], written by Doug Saunders, one such shooting scenario had an “armed man” shooting “three people” before officers locked down the scene.

Shockingly this was nearly an identical scene to what unfolded on Friday, November 1st ( All Saints Day) at LAX. A scene in which, one TSA officer was shot and killed, with three others wounded [2], leaving a total of 7 injured at the Los Angeles International Airport.

OVERKILL, OR JUST A DRILL?

It was an overwhelming display of state security assets. The exercise involved some 300 police officers to perform an active live drill, a massive fire department presence including dozens vehicles and even more support personnel – along with teams from federal agencies FBI, ATF and DHS.

This should come as no surprise to anyone following some of the recent mass casualty events in the Untied States, such as the Aurora theater, Boston Bombing [3] and Sandy Hook [4], all of which were said to have had some type of drill prior to the “real-life” event.

One should also note that in 2002,  Hesham Mohamed Hadayet opened fire in the same airport killing two Israeli’s at the El Al airlines ticket counter.

It was also initially reported that the 23 year-old suspect, Paul Anthony Ciancia of New Jersey was a TSA agent by authorities [5], almost simultaneously someone posted a fake account on Facebook [6] with the same name containing a photo of another man.

Was this an act of misdirection, clouding one’s ability to sift carefully through the information, giving authorities the chance to change the TSA agent narrative?

“Law enforcement sources had earlier told The Times that the gunman was a TSA employee.” – The Times

Watch the YouTube video below, the eye-witness below is clearly not talking about the same suspect at the LAX shooting…

Amazingly the eyewitness reports that the alleged shooter was much bigger than him in addition to being dressed like a uniformed TSA agent. Clearly something is amiss?

Note the witness also states that the person shooting had a pump shotgun and a hand gun not an AR-15 style rifle. He also make mention to possible body armor. 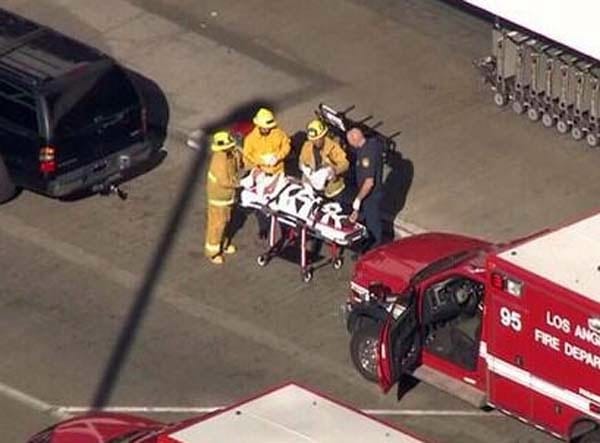 An unprecedented response for just “one shooter” at LAX.

Air travelers in a ‘panic’ over LAX shooting, what do you really see? Is this Westgate all over again?

Will this open the door for armed TSA agents in the near future?

MSNBC and other liberal-leaning media outlets are already devoting most of their debate time to the presence of the much-feared “AR-15″ Semiautomatic assault rifle at the scene of this event. The talk of assault rifle bans is back on, and will provide an easy distraction from the other more important – and critical national issues and scandals plaguing the Obama White House.

Thus far this appears to be another botched false flag operation, but that’s just our opinion…