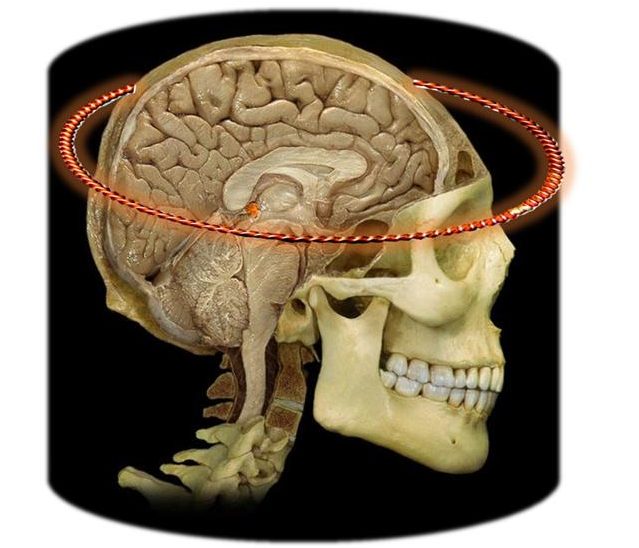 The Amazing “Tensor Ring”: Pineal Gland Activator and Much More

Within a Tensor Ring is an infinite source of energy that is neither electric nor magnetic. Its output is beneficial and healing to all life forms. It is a superconductor. It neutralizes magnetic fields. It brings coherency to chaos, and it produces a measurable gravitational effect. Beyond all this, a Tensor Ring is simple and inexpensive to create.

Tensor Rings were conceived by the late Slim Spurling, a world famous geo-dowser with an interest in metaphysics and a vision of planetary healing.

His story has been documented in two books which I encourage you to read.

Slim knew that linear objects have polarity. He found evidence for it in trees – and in a length of wire. Playing with this concept, Slim formed a closed loop that resulted in an electromagnetic column of energy emitted perpendicular to the enclosed loop. 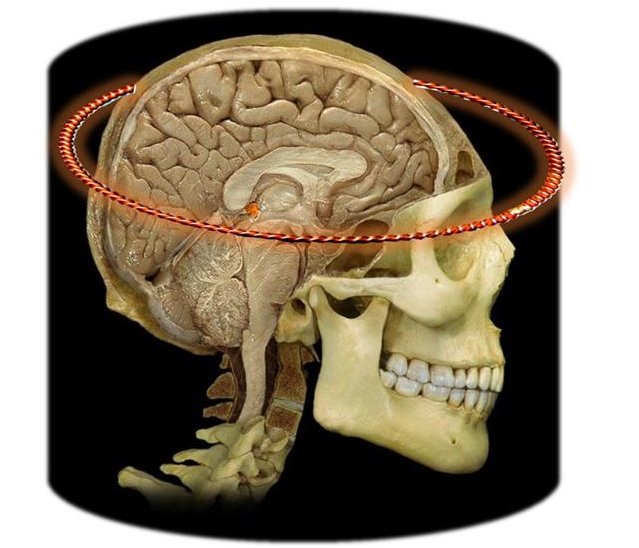 According to the astrophysicist Hans Becker, “when you create a closed loop coil, energy begins to flow and the laws of physics go out the window. They may be the simplest, most efficient source of energy there is- gathering it and condensing it freely from space.”

Interestingly, Pangman and Evans, authors of Dancing with Water: The New Science of Water, noted that Navajo hogans were constructed using positive and negative ends of logs to create a closed loop of specific length, hence creating a Tensor field that augmented the living environment.

What Makes a Working Ring?

Now, don’t run out and make a Tensor Ring — yet. There are two conditions that must be met in the creation of a Tensor Ring. The first requirement is that the wires must be twisted. The reason for this is found in the concept of Common Mode Rejection, as used in basic electronics to cancel out the “noise”, in the electro-magnetic field. 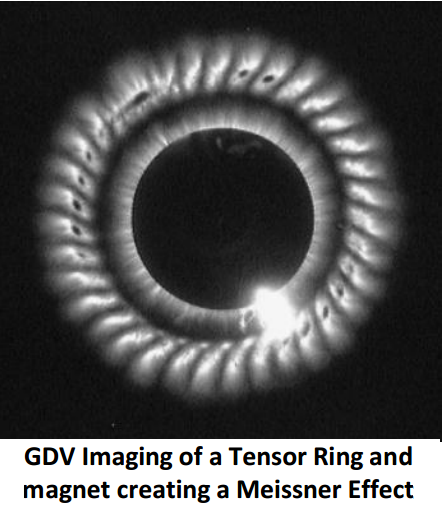 When Slim put a right-handed twist to the folded length of wire, and closed the ends back onto each other, there was a cancellation of the electromagnetic field within the Ring. This created a non-polar column of light.

The second condition for the creation of a working Tensor Ring is the length of the wire. Many people have heard of the Cubit which is a unit of measure from megalithic structures around the globe. The particular Cubit length for the Spurling Rings comes from the Great Pyramid of Giza.

Doug Benjamin, who found and interpreted a lost symbol from within the King’s Chamber, discovered four different Cubit lengths within this symbol. Doug utilized two sets of these Cubit lengths to create “Sacred Space” by effectively neutralizing harmful geomagnetic lines.

Slim began using this set of cubits for Geopathic stress remediation in GDV Imaging of a Tensor Ring and magnet creating a Meissner Effect GDV Imaging of a magnet the Denver area in the 1980’s. Rods of specific Cubit lengths were driven into the ground to neutralize the harmful effects of the Hartman Grid Lines.

The Cubit we are interested in is the Royal Cubit (52.5 cm), which was the length used in the first working Tensor Ring. According to Hans Becker, “the resonant frequency of the Royal or Sacred cubit is 144,000 Hz — a harmonic of the speed of light.”

Slim referred to the Sacred, or Royal, Cubit length as being one ten-millionth of the polar radius of the Earth, and having a relationship to the radius and mass of the hydrogen atom. “Slim and Hans Becker eventually identified another cubit length, 23.49 inches (59.69 cm).

Through observation, it has been determined that a 1/8, 1/2, 1½, 2, and 3½ Cubit length twisted wire also produce working Tensor Rings. The ½ Cubit Spurling Ring (26.25cm) still emits the same 144 MHz as the full Cubit length of 52.5 cm according to measurements taken by Hans Becker.

Experimentation has revealed that a random length of twisted wire does not necessarily create a working Tensor Ring — and not all cubit lengths produce a working Ring.

My personal experimentation has revealed another Cubit length that creates a Tensor field; Slim’s widow has access to yet another working length. It is postulated that there were 64 different Cubit lengths. I am aware of 19. These have all been closely guarded; just as the knowledge of creating the Tensor Rings has been.

The design of Tensor Rings is based in Sacred Geometry and ancient knowledge — intended to benefit all mankind. It is time for this knowledge to be released. 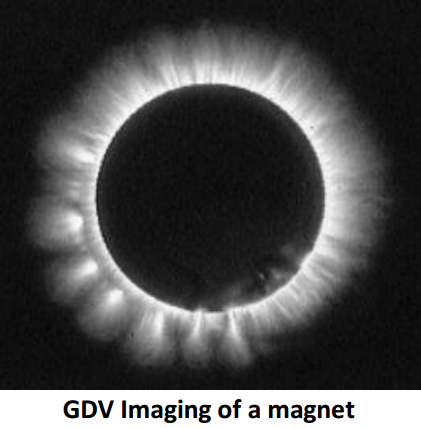 A Call for Co-Creating

I am neither a quantifier nor a quantum theorist. I consider myself a master builder of subtle energy tools — many of which are based on Slim’s pioneering work. I am an instructor and a healer through the use of subtle energies, yet I have been educated in the value of epistemology.

I do my best to offer theories and evidence in regards to the Tensor Field, though the intent of this article is to call those of you who have passion in what you do, to further this discussion amongst your peers around the world.

Hartmut Mueller’s global scaling has been discussed with regard to the Spurling Rings, as the Tensor Rings emit a harmonic to a specific gravitational wave.

I suspect that the Tensor field created in Tensor Rings is a type of anti-gravity field. Viktor Grebennikov’s work supports this hypothesis. His work with levitation and the cavity Structural effect (CSE) suggests that the CSEs found in natural geometric structures, such as beehives, reduce the gravitational field.

According to Grebennikov, “This conflicts with the Second Law of Thermal Dynamics, concerning entropy, which is a measure of disorder. Gravity is entropy. The CSE demonstrated the qualities of an anti-gravity field: a high level field of coherency.“

Let’s look at the connection between anti-gravity and coherency

Coherency appears to result from organization which creates a phase relationship between waves and/or particles. The authors of Dancing with Water discuss the molecular structure of water and the resulting coherence through the use of a Tensor Ring. “When water is passed through a Ring, its molecular structure becomes more organized. The longer it sits inside the column, the more refined the structure becomes.”

“According to Phillip Callahan, an expert on paramagnetism, Tensor Rings exhibit a paramagnetic value many times greater than anything ever tested.

This means that Tensor Rings cause some of the elements in water to spin to their high-spin state referred to as ORME [Orbitally-Rearranged Monoatomic Elements]. This has a tremendous impact on water’s molecular structure and on the energetic components of the water.”

Perhaps the increased spin rate explains the gravitational effect on physical structures placed within this column of light. Further evidence is revealed in the website created by Pangman and Evans:

“Place two equal volumes of water in identical containers on a balance scale so that they are equally balanced. Place a Tensor Ring directly over one container. After 24-48 hours, the container with the Ring above it becomes measurably lighter (the difference in weight is dependent on the type and amount of minerals or salts in the water that can enter a high-spin state).”

Moving on to Superconductors

Superconductors have traditionally been created by super-cooling. When a substance reaches what Walther Meissner called “critical temperature,” it cancels or expels nearly all interior magnetic fields. This phenomenon is referred to as the Meissner effect.

HyperPhysics of Georgia State University informs us further about superconductors.

“Zero resistance has been demonstrated by sustaining currents in superconducting lead rings for many years with no measurable reduction, where induced current in an ordinary metal ring decays rapidly.”

In a Lecture on Superconductors, Hudson Says: 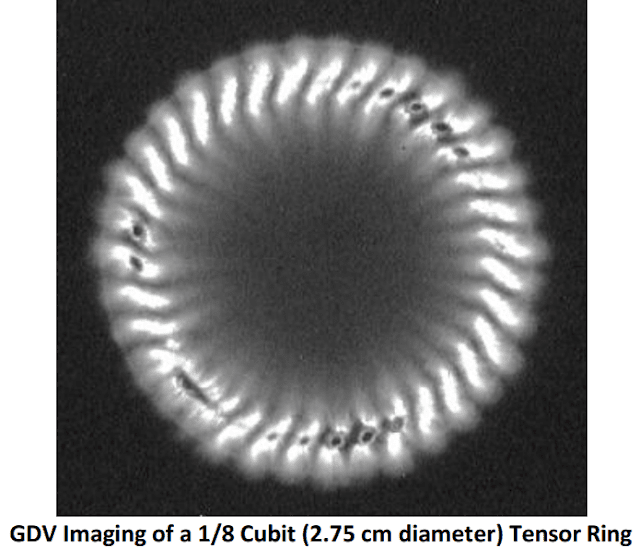 So if you literally can make a superconductor that stretches from Portland to New York City and you put energy on over here for two or three or four days. You don’t have to take it off over there. It’s ok; you can keep putting it in. And when they want it in New York they can resonance frequency tune the wire, apply voltage and suck it out.

It gets a free ride from Portland all the way to New York on this quantal wave of the superconductor, as light not electricity. How do you measure it if it has no voltage in it? How is it possible to get a machine that can measure this light? And guess what?

It can’t be done, cause every piece of instrumentation man has ever figured out always uses a differential it must reflect and yet a superconductor has no voltage.

You literally start the superconductor flowing by applying a magnetic field. It responds to the magnetic field by flowing light inside of it and building a bigger Meissner field around it.”

So, What’s in a Tensor Ring?

Slim’s partner, Bill Reid, who was there during the discovery and development of the Tensor Ring, calls it anti-gravity. Clairvoyants see a flow of energy. Those of us sensitive to feeling, know it has some kind of energy.

As Viktor Grebennikov said when trying to prove the existence of CSE “The organism felt it, while the instruments were silent.”

So many of us have seen, felt, and experienced this energy. Beneath the void of scientific validation is an undercurrent of immeasurable potential. Those of you reading this article know this as a truth. I am hopeful that the ideas of Tesla, Spurling, and other visionaries will continue to live through us and become manifest in this world.

Observations of the Tensor Ring

In his private lab, Hans Becker “analyzed water placed in the energy field of the rings using a spectrophotometer and found that the rings altered the optical transmission of the water.

They allow more light to pass through and they changed water’s absorption of photons (light units). These are indications of changes in molecular structure.”

“…if Rings “organize the space” (create coherence) within their energetic column, this would explain their ability to reduce pain and inflammation and their ability to improve the healing response.”

“One of the most practical uses for this ring is raising the energetic level of water. Tap water has about 22,000 Bovis units of energy, whereas water placed within such a ring for a couple of hours, reaches a 1.2 million Bovis unit level.”

“Water so treated has a lower freezing point and a different crystalline ice structure than that of untreated water. Take two identical glasses of ice water, set one in a ring, the other a foot or so away and see which melts first!” (Ibid)

Another beneficial use we have found for the Tensor field is in electromagnetic and geomagnetic field abatement. 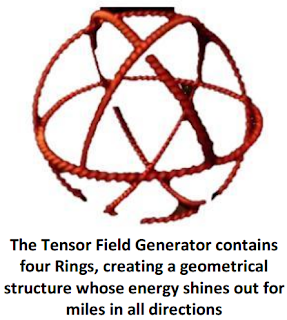 – The taste and smell of Chlorine is diminished in 2-3 hours when ring placed around or below water container;

– Water changes from very acidic pH to neutral or slightly alkaline when left standing in the ring for 24-48 hours;

– Stiff wrists and shoulders have relaxed and pain disappeared in a few hours with Rings;

– Known to calm swelling and tension of injuries;

– Found to remediate the harmful effects of electromagnetic and geomagnetic frequencies;

– Placing an object in the energetic column amplifies the object’s vibratory energy;

– Adds to, or synergizes, with all forms of energy healing and healing devices;

Tensor Rings can be conveyed in different physical forms to create different energy structures and flows. The basic Tensor Ring creates a vortex that flows out in a column of light. Pictured are other tools based on the Tensor Ring. 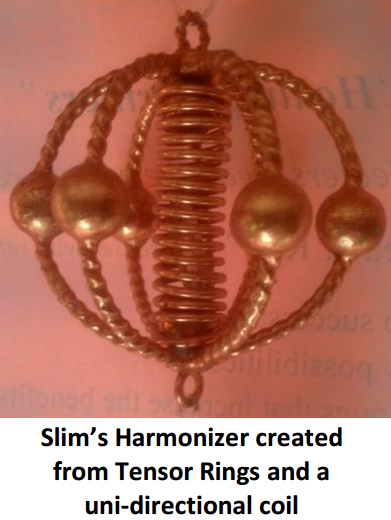 All GDV Imaging filmed by Tony Gates. You may contact Tony by email at [email protected].

For detailed information on creating Tensor Rings, search for the YouTube video “Creating the Tensor Ring.”

Twistedsage.com contains more information on the subtle energy tools created from Tensor Rings, and the GDV videos of the Tensor Ring and magnet.