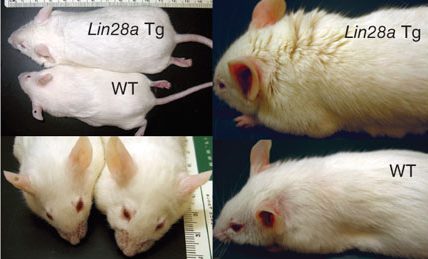 Mice that had been genetically engineered to develop tumours failed to do so. Instead, the animals grew up to be huge and very hairy.

And when the tips of the pups’ toes were clipped off in a routine tagging procedure, they often grew back.

What was different about these mice was that they carried a protein, Lin28a, which is generally produced only in developing embryos. Lin28a has already garnered attention for its involvement in the functioning of stem cells and in cancer. 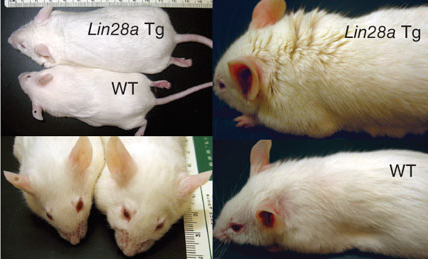 A study published today in Cell1 now shows that this protein can improve tissue repair — even in adults. In mice genetically modified to produce the protein throughout their lives, the animals’ hair grew faster than normal and puncture wounds in their ears healed almost completely.

“We were just so shocked that such a small change in this gene could have profound effects on a complex regenerating tissue,” says Hao Zhu, a cell biologist at the University of Texas Southwestern Medical Center in Dallas and an author on the study.

Resetting cells using embryonic genes has been seen before, most prominently in the creation of cells known as induced pluripotent stem cells, which acquire an embryonic-like state after a suite of genes is activated. But the latest study reveals that such de-ageing changes can be made not just in cultured cells, but in developed tissues within an organism.

It suggests that it might be possible to make older tissues behave more like young ones, which are much better at repairing damage. In mammalian fetuses, for example, even deep wounds can heal without scarring.

“Your body knows what age it is, and genes regulate that knowledge,” says Zhu. “There are genetic regulators that dictate that. We don’t know what all of them are, but I think Lin28a is one of them.”

Not everything that the researchers tested gained extra healing power with Lin28a, however. Heart regeneration, for example, was not boosted . And the tips of clipped toes did not grow back once the mice had reached young adulthood. But accelerated regrowth of hair and of the cartilage and connective tissue in the ear continued.

“The fact that it doesn’t work sometimes is even more interesting because it raises the question why,” says Daniel Goldman at the University of Michigan in Ann Arbor, who has studied the role of Lin28 in regenerating retinas in zebrafish. He suspects that some tissues, like the heart, may have mechanisms that resist resetting.

What is particularly intriguing is how Lin28a resets the biological age of a cell. The protein is most studied for its effects on an RNA molecule called let-7, which restricts cell proliferation and boosts maturation. 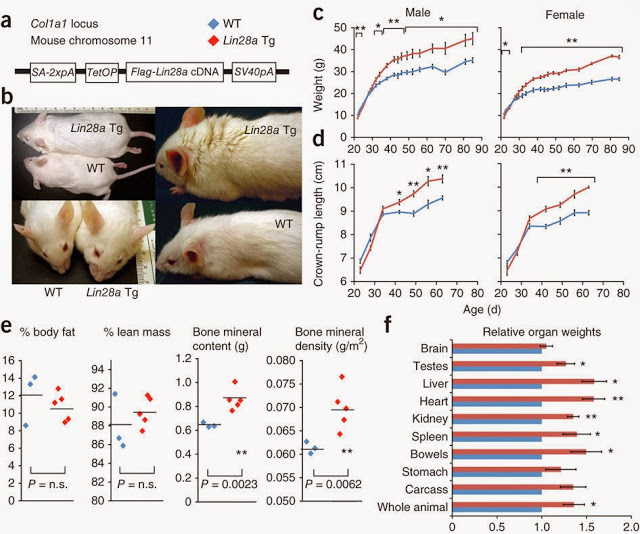 But Zhu and his colleagues found that Lin28a also affects cellular metabolism by boosting the levels of several enzymes involved in the functioning of mitochondria, the energy-producing organelles in cells.

The fact that metabolism was involved in the healing effect was the most surprising result, says Shyh-Chang Ng, a cell biologist at Boston Children’s Hospital in Massachusetts and one of the study’s authors.

“Most biologists would think that you need a special factor to generate the healing pathway, but this is a thing that every cell has,” he says.

This idea is still a long way from having medical applications, however, says Ng. Most drugs target either enzymes or receptors on a cell’s surface. Lin28a is neither; it is an RNA-binding protein located in the nucleus, and is therefore hard to target with conventional drugs. Furthermore, it has many effects on a cell, so knowing which to focus on is unclear.

Further, I want to submit to your attention two separate cases of immortal human cells, which have been discovered by scientists, but before proceeding I want to add that I disavow lab testing on animals. Though I am aware that there are cases in which lab testing may probably be necessary for the “greater good,” I’m sure that we could, at least, seriously reduce this practice.

Nobel Prize in medicine went to a trio of scientists who discovered the enzyme telomerase, which allows cells to divide without any limits, making them effectively immortal.

It may be nature’s greatest double-edged sword. Coax cells into producing telomerase, and they will survive indefinitely, but they will also become cancerous.

Muller thinks humans could live for 90 to 210 years once scientists know more about the molecular basis of aging.

“If we could figure out how to do maintenance, we could extend our lives,” he said. “But it has to be done very carefully, and we’d have to have a comprehensive understanding of the mechanism.”

They are also very weird looking. HeLa DNA has been extremely mutated, having 82 chromosomes instead of 46. That strange DNA is also responsible for making the cells replicate abnormally fast, even for cancer cells, and they also have an active copy of telomerase – which means they can replicate indefinitely.

The cells that we are familiar with age as they divide, until they reach a stage known as the “Hayflick Limit,” to which point they stop dividing, amking our bodies grow old and eventually die. Not HeLa cells!

You can read more about both discoveries, by following THIS link.

Awakening From Our False-Self to Remember Our True-Self Previous post
30 Traits of the Empaths — Are You One? Next post