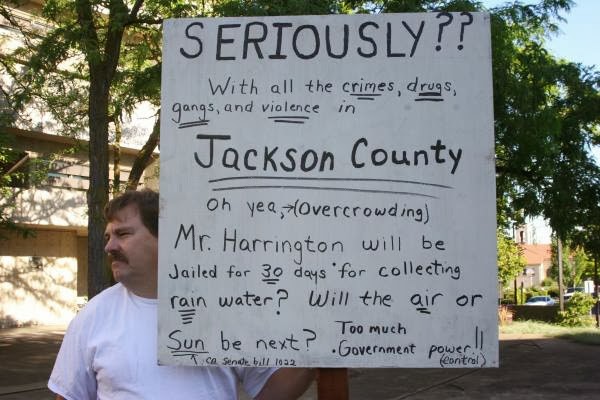 30 Days in Jail for Collecting Rain Water – It Happened in Oregon!

Harrington, of Eagle Point, Oregon, has been fighting for his right to do what he wishes with water since 2002. Now more than a decade after he first defended himself over allegations that the man-made ponds on his 170 acres of land violated local law, Harrington has been sentenced to 30 days behind bars and fined over $1,500.

Authorities say that Harrington broke the law by collecting natural rain water and snow runoff that landed on his property.

Officials with the Medford Water Commission contested that the water on Harrington’s property, whether or not it came from the sky, was considered a tributary of nearby Crowfoot Creek and thus subject to a 1925 law that gives the MWC full ownership and rights.

Therefore prosecutors were able to argue in court — successfully — that three homemade fishing and boating ponds in Harrington’s backyard violated the law.

For filling “three illegal reservoirs” on his property with runoff water, Harrington has been convicted on nine misdemeanor charges in Circuit Court. He says he will attempt to appeal, but as long as the conviction stands to serve 30 days of imprisonment. He has also been sentenced to an additional three years of probation.

Thirty days in jail for catching rainwater?” Harrington tells the Mail Tribune. “We live in an extreme wildfire area and here the government is going to open the valves and really waste all the water right now, at the start of peak fire season.”

“When it comes to the point where a rural landowner can’t catch rainwater that falls on his land to protect his property, it’s gone too far,” he adds to the Associated Press. “This should serve as a dire warning to all pond owners.”