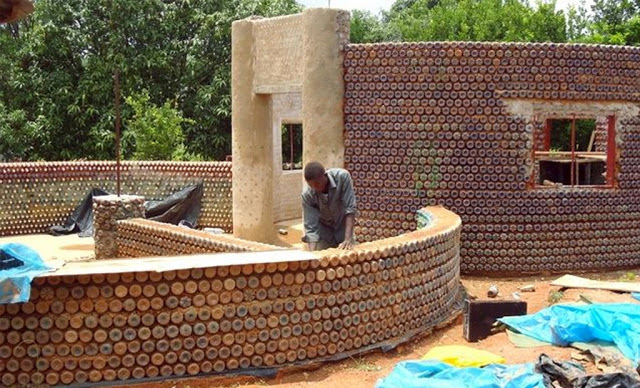 Genius! How to End Homelessness in One Year

I. How America Could End Homelessness in One Year With Something We All Throw Away Every Day

If America really cared about solving the problem of homelessness among it’s citizenry, here’s an idea that would work.

Anyway, let’s say the problem with homeless people in America was a result of not enough housing. Then, this idea would work. 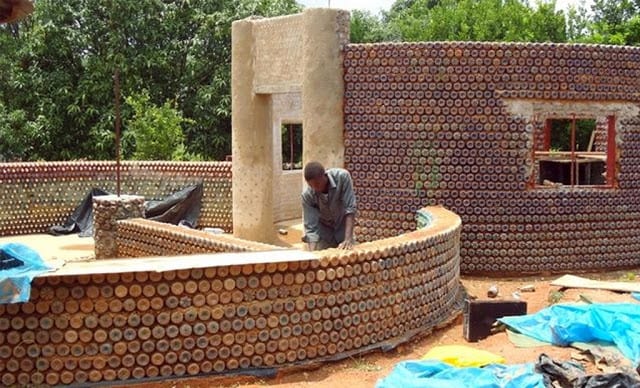 (A man builds a wall with plastic bottles in the village of Sabon Yelwa. A group of activists have come up with a plan to build a house using bottles, providing what they say is an environmentally smart way to tackle the housing shortage problem in Nigeria).

Did you know that you can make houses out of plastic bottles? By filling them with sand, and molding them together with mud or cement, the walls created are actually bullet proof, fire proof, and will maintain an comfortable indoor temperature of 64 degrees in the summer time. 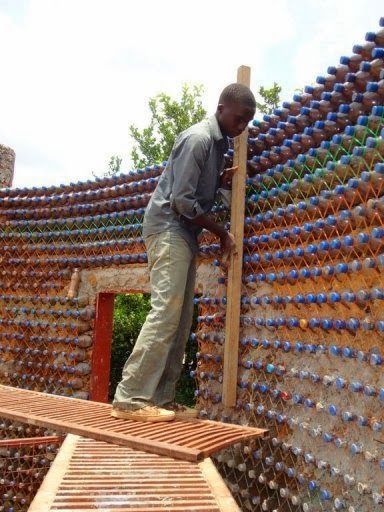 And it’s not like there is any shortage on used plastic bottles out there. Here are some statistics from treehugger.com: 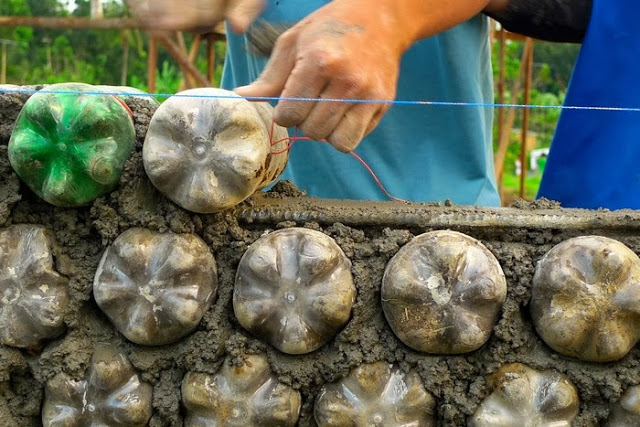 The United States throws away enough plastic bottles to build 9257 of these 2 bedroom houses per day! That’s just over 3.35 million homes, the same number of homeless people in America. 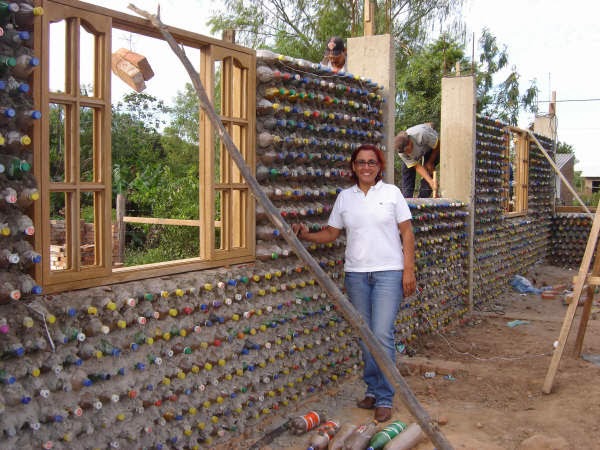 Many people in third world countries have taken up building homes out of plastic bottles, from Africa to Asia. Perhaps the trend will catch on in America and all of those bottles will stop ending up in the landfills. Wouldn’t they be better off housing the homeless? Kinda like all those empty houses scattered all over the country? – (by Kevin Lake, Free Patriot);

II. Hot to Build a Plastic-Bottles House Yourself 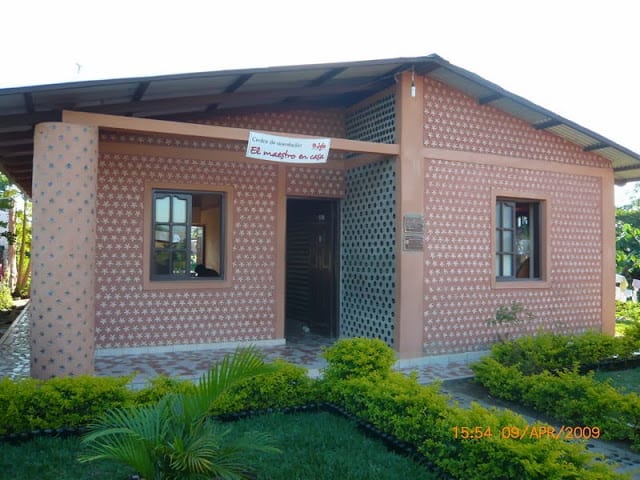 This project was done as part of our college activity. The man behind this innovative idea is a german named Andreas Froese,who is also the founder of ‘ECO-TEC‘.

Bottles have the following advantages over bricks and other construction materials:

1. Low cost – You know how much a bottle costs;
2. Non-Brittle – Unlike bricks;
3. Absorbs abrupt shock loads – Since they are not brittle,there can take up heavy loads without failure;
4. Bio climatic;
5. Re-usable;
6. Less construction material;
7. Easy to build;
8. Green Construction;

When you make a clay brick, the time and energy used right from mixing the clay to baking it in the kiln and taking into account the firewood used for that, you will see that the bottle brick is far more energy-efficient.

The technology also reduces the carbon emission that happens during the baking of an ordinary brick . The heat generation from cement factories can also be reduced as this technology uses only five percent cement. The foundation for the entire construction is obtained from building waste and so the mountains from which granite is blasted out can be saved too.

PET Bottle can last as long as 300 years (undoubtedly longer than the cement used to bind the bottles together in the walls!).

The following picture is of an ecological house constructed in Honduras using some 8,000 PET bottles, in the process freeing up an estimated 12 cubic meters (m3) in the local landfill. 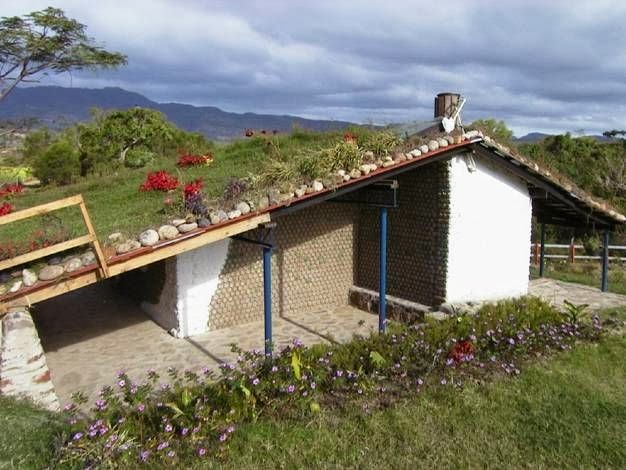 When wet, the 102 square meter (m2), living roof of the house can weigh as much as 30 metric tons. The PET bottle walls can support the weight.

The following instructions explain how to build a pavilion:

1. Your first step is to collect as many discarded plastic bottles as you can. They can be of various capacities.

2. Next step is to find a place where you can get a lot of dry sand (the finer,the better).

3. Next process is to take the bottles, fill them with sand, sealed and then paste them with a mixture made of earth, clay, sawdust and a little cement to provide additional strength and durability.

4. Now you are all set. Always start with the pillar. You can have as many pillars as you want,but not less than 3.

5. Dig a cylindrical pit about 60cm in depth. The radius should be at least 10cm more than the length of the bottle that you are going to use for constructing the pillar.

6. Make a cement bed (about 4cm thickness) in the pit. Insert an long iron/steel rod at the centre.Tie a long and strong thread to the rod. Now we are going to lay 10 or 11 bottles around this rod. For this, first lay a bottle on the bed such that the bottle is radially oriented towards the centre.(i.e.,the cap is oriented towards the rod).

7. Take the thread and make a knot around the neck of the bottle you just laid. Put the next bottle in similar way keeping in mind that the caps of the 2 bottles touch each other. Make a knot around the 2nd bottle also. Repeat the steps until you lay all the 11 bottles.You have made your first course of bottles.

8. Fill in the gaps between the bottles with rubble and cement. Make the next bed and continue this process till you fill the entire pit. Your foundation is now complete. Leave it for a few hours so that the cement will solidify. 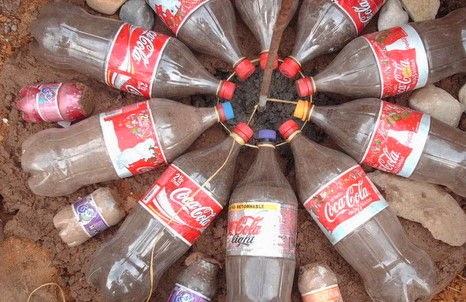 10. Now if you want you can plaster your pillar with cement. This pillar is many times stronger much cheaper than an ordinary pillar made with bricks.

After building all the pillars, you are ready to make the platform:
1. Make an outline of your platform with chalk powder or any color powders.
2. Make a Clay bed about 5cm height and width = 5 cm > length of the bottles. This bed runs along the perimetre of the platform.
3. Now lay the bottles (with their neck facing outwards )one by one on this bed and tie them to each other as shown in the picture. After laying a course, fill the inside area with cement, clay or rubble.
If you want to make more courses, make sure that you knot each bottle of the underlying course with the above course as shown in the picture. This is to impart more strength to the structure.
4. This is your platform. Now put tiles or ceramics for flooring.
5. You can put any type of roof over this because the pillars are really strong enough to hold them.
6. Create your own designs, and build your own structures with this cheap construction method.
Here is another finished plastic bottles house: 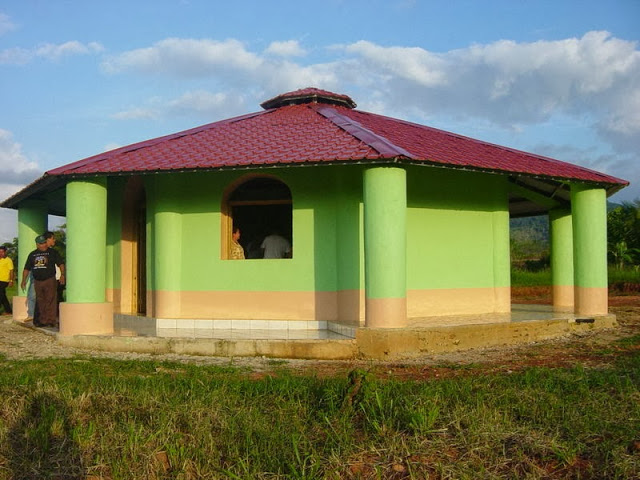 It looks GREAT, isn’t it?
HumansAreFree.com; | Sources: Free Patriot, Instructables;
The Sighting That Triggered the UFO Hype Previous post
Will Enough of Us Refuse to Obey? Next post